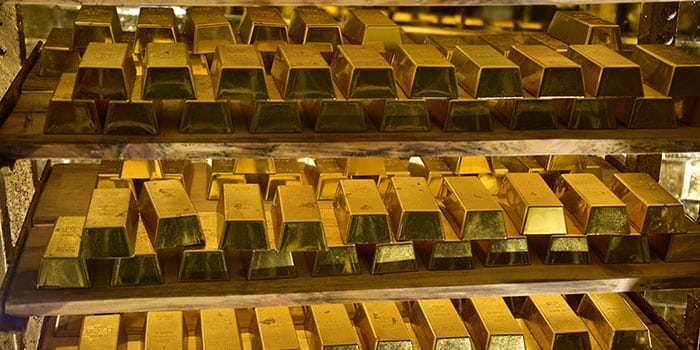 In early March, a bill was introduced to the United States Senate in an attempt to restrict Russia from selling its gold. The legislation was a collaborative effort from a bipartisan group of senators.

The bill has far-reaching implications because Russia is facing the toughest sanctions ever imposed in history. Many believe the Russian government will need to liquidate its gold reserves to remain afloat economically.

Four senators introduced the bill: Angus King (I-ME), John Cornyn (R-TX), Bill Hagerty (R-TN), and Maggie Hassan (D-NH). The bill takes aim at the roughly $132 billion USD held in gold by Russia. The goal is to dramatically limit the number of people able to buy gold from Russia. Specifically, the bill seeks to apply secondary sanctions to American entities that deliberately engage in any transactions with Russia’s central bank holdings or anyone attempting to transport gold out of Russia. These rules would apply to both physical and digital sales of gold.

The move would further restrict Russia from participating in the global economy. The bill would also derail a critical part of Russia’s strategy which has been long in the making. In 2014, the U.S. imposed sanctions on Russia in retaliation for their invasion of Crimea in the south of Ukraine. In response, Russia increased its gold purchases – likely intended to safeguard the country from the impact of those sanctions and other anticipated sanctions.

In a statement, Senator King remarked:

“Russia’s massive gold supply is one of the few remaining assets that Putin can use to keep his country’s economy from falling even further … [B]y sanctioning these reserves, we can further isolate Russia from the world’s economy and increase the difficulty of Putin’s increasingly-costly military campaign.”

The bill–S.3771 – Stop Russian GOLD Act of 2022–would remove one of Russian leader Vladimir Putin’s few remaining resources. The bill not only limits Russia’s ability to survive sanctions but it also makes it difficult for Putin to maintain an occupation of Ukraine even if he is successful in taking the country.

Meanwhile, costs continue to mount as Russia continues its military offensive. A study from the Centre for Economic Recovery, CIVTTA, and EasyBusiness concluded that the daily cost of the war for Russia is approximately $20 billion. An inability to liquidate their gold reserves will make meeting this cost difficult.

These moves have renewed interest in gold among investors, who increasingly see the metal as a reliable store of value during global turmoil. In the last six months, gold has appreciated in value by approximately 8.7% while the S&P 500 has only grown by approximately 2.1% over the same period. Moreover, the S&P 500 is down more than 6% year-to-date.

As the war continues to devastate Ukraine, it is clear that gold will become an increasingly important part of the global financial system as other asset classes waiver amid uncertainty.