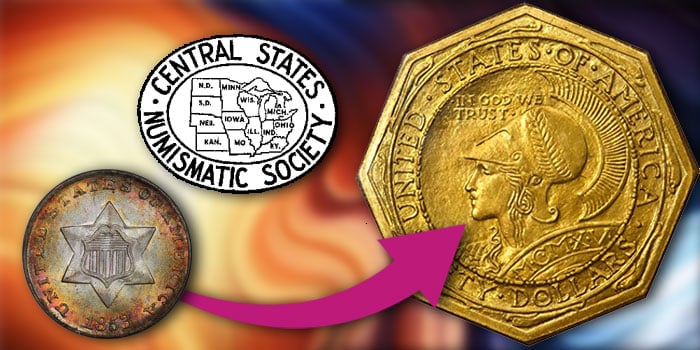 The show will be conducted April 27-30, 2022 at the Renaissance Hotel and Convention Center, 1551 Thoreau Dr., in the Chicago suburb of Schaumburg, Illinois. That state-of-art convention facility and hotel, located only 13 miles from O’Hare International Airport, have been the site of CSNS conventions in recent years.

“We’ve had extremely high demand for tables for the upcoming April show, so we have added additional space in the convention hall and redesigned the floor plan to add more than 80 additional tables. This is shaping up to be the largest Central States convention in over 30 years and could be the largest in its 83-year history,” said CSNS Convention Manager Larry Shepherd.

“Although we were nearly sold out before the expansion, we now have tables available in all floor sections: U.S., World and Ancient, and Currency. I encourage dealers to act quickly to sign up for available space,” he emphasized.

The Central States convention is the home show for the Professional Currency Dealers Association (PCDA).

“This involves all categories of numismatic coins and paper money, including U.S. and world coins, ancients, and U.S. and world banknotes,” according to Shepherd. “PCGS and Collectors Universe will also be the Official Supplier of Grading and Authentication for sports-related items as well as numismatic items for the CSNS convention.”

With the expansion of floor space, there will be several exhibit areas including special displays of superb-quality U.S. Large Cents by PCGS and 240 showcases of collectors’ exhibits. Some of the exhibit owners will be available for meet-and-greet sessions to answer visitors’ questions.

There will be a 2022 PNG Day on Wednesday, April 27, for the Professional Numismatists Guild (PNG) and its invited guests, and the CSNS show will be open to everyone, April 28-30.

Official auctions will be conducted by both Heritage Auctions and Legend Rare Coin Auctions in conjunction with the convention. Positive Protection, Inc. will be providing security at the show.

Hotel reservations with a special CSNS convention discount can be made here.