Stack’s Bowers Galleries is thrilled to announce the display of the famous Hawaii Five-O specimen of the 1913 Liberty Head nickel at the Long Beach Collectibles Expo, September 30 through October 2. Featured at Stack’s Bowers Galleries’ table number 702, this incredible display offers collectors the chance to experience one of the greatest rarities in United States numismatics. 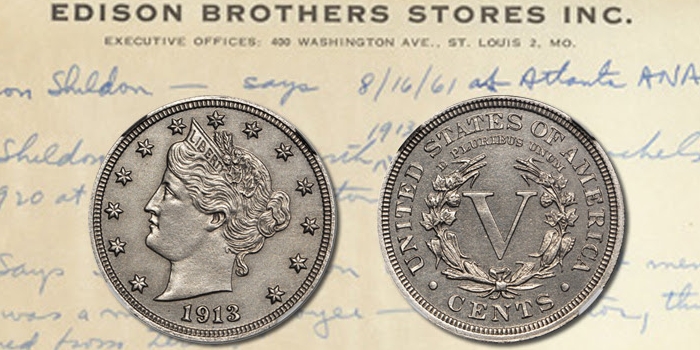 The 1913 Liberty Head nickel is among the most famous and prized of all U.S. coin issues, regarded as the “King of 20th Century coinage”. Together with the 1894-S dime and the 1804 silver dollar, it is considered part of the “holy trinity” of U.S. rarities. Each of the five surviving 1913 Liberty Head nickels is a historic treasure, although the Hawaii Five-O specimen is perhaps the most significant. This specimen was featured in a December 1973 episode of the television show Hawaii Five-O, one of the most popular programs of the era. It was this episode and this exact coin that made the 1913 Liberty Head nickel a famous rarity even among non-collectors. Prior to its television appearance, however, this specimen had already amassed an extraordinary pedigree and can be traced back to the legendary collections of Colonel E.H.R. Green, Eric P. Newman, Fred Olsen, and King Farouk of Egypt. Graded Proof-64+ by NGC and awarded a green sticker by CAC for superior quality, this specimen ranks as the second finest of the five known examples, only three of which are in private hands. Stack’s Bowers Galleries has a long history of handling these treasures throughout their 88-year legacy, including this very coin, which it sold three decades ago in the 1993 Reed Hawn sale. Most recently, the firm set a price record for the issue with their sale of the Eliasberg example for $4.56 million in 2018.

This famous 1913 Liberty Head nickel will be displayed at Stack’s Bowers Galleries’ table number 702 at the Long Beach Collectibles Expo from September 30- October 2, featured alongside highlights from the firm’s November Showcase sale and other exciting upcoming auctions. For questions about this world-class rarity or to consign your collection to a Stack’s Bowers Galleries sale, contact the firm at 800-458-4646 or e-mail [email protected]

Visit us online at StacksBowers.com