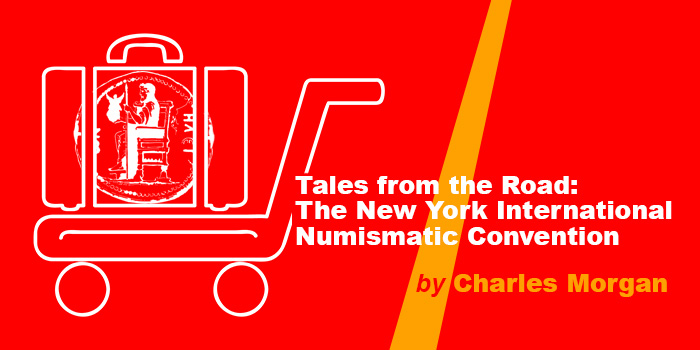 For many dealers, the road is a fact of life.

It is a life lived in and out of a suitcase.

When I go to shows, as tiring as it can be, I try to keep my mind focused on why I do it. This is a lifestyle. We are all players in a traveling roadshow of history and commerce. We all have it in us to be storytellers and to exalt in the hobby of numismatics.

Every coin, medal or banknote in a dealer’s case carries with it a story. Whether we know it or have invested the time to seek it out is often another story. When I bring my camera to a coin show, I look for these stories and try to provide that spark to make the viewer think, “Oh man, I want one of those!”.

I think of myself and the person I am interviewing as only parts of the equation. We are the numerators, if you will, and our knowledge and our conversation about a coin provides but a fraction of the insight that can be gained by deeply studying a coin. In this analogy, the denomination is the denominator. The bottom line is always about the object!

I filed my report about the FUN Show and headed to New York excited about the trip. The New York International Numismatic Convention (NYINC) is typically held at the same time as the FUN show and for many, this conflict dictates a choice. If you sell U.S. coins or notes, you are likely to choose FUN. If you sell ancients and world coins, you choose New York. If you have a large enough staff, perhaps you do both.

Whereas FUN is held in huge convention centers, the NYINC is a hotel show. A hotel ballroom packed to capacity with rows so narrow that only two people can walk up and down an aisle at the same time but filled with collectors all the same. As you can imagine, it was a challenge to shoot video on a tripod in such an environment. I had planned for this.

With me in New York was CoinWeek Ancient Coin Expert Mike Markowitz. I often see Mike in Baltimore at the Whitman Coin and Collectibles Expo, where he graciously presents educational seminars on ancient coins. Mike is a true enthusiast. He loves ancient history and specializes in collecting Byzantine coins. His articles provide many collectors their introduction to this side of the hobby. Collecting ancient coins may seem exceptionally challenging to the uninitiated, but Mike shows (through his writing) that the way to collect can be as simple as finding some aspect of ancient life that you are fascinated in and collecting that.

Having him in New York with me was like having an enthusiastic friend, whose passion for numismatics is matched only by his knowledge. We filmed a Cool Coins! segment with Harlan Berk, longtime dealer and author of Whitman’s 100 Greatest Ancient Coins. At the end of the segment, Harlan remarked to me, “He knows his stuff!”

For Mike, it was an opportunity to experience the “big leagues” of ancient coin collecting. The New York show is so well-attended because of the pent-up enthusiasm of its attendees. It is, in essence, the World Series of Ancient and World Coins. Nary a Morgan dollar did I see, let alone anything U.S. What was available in abundance? Drachms, aurei, denarii, staters, drachmas, Islamic and Asian rarities… and the occasional modern world coin. Some rare, some not.

We filmed a bit, talked to as many people as we could and headed down to the lot viewing room. Mike took in a few Byzantine gold coins at Baldwin’s, including one that was expected to sell for more than $100,000 and another that Mike actually bid on! We live streamed this on our Facebook page.

I found Julie Abrams and Greg Cohen at the Legend Rare Coin Auction lot viewing room. They had the lots Regency 25, which will be held later this month. I asked that they pull out about a dozen coins so I could discuss them on camera. Look for that soon.

The ANS Gala was held on Thursday night. If you were one of the swells that could afford to put $750 into dinner at the Harvard Club, then I’m sure you went. I had a $15 burrito a few blocks from the hotel. It was nice having a little time to myself.

On Saturday, Mike and I joined publisher and writer Ursula Kampmann of the German numismatic publication CoinsWeekly. We had a lengthy and energetic discussion about the divide between the collector culture and the numismatic market in the US and Europe. I tried to impress upon her the fact that American press releases should not be overly verbose and prosaic. She believes that our ad copy is often too amateurish for the serious-minded collectors of the German market.

And as the evening progressed, we discussed a great many things about the industry and our experiences covering it, Mike joining in with his insights. I found myself thinking about the scene we must have been making to all of those around us. Here we were, three minds focused on and passionately discussing numismatics at a high level… for hours, non-stop, over plates of food that would have been the focus of our attention had the conversation not been so compelling.

For Ursula and me, it was a nice reprieve from the practical realities of running a numismatic publication with passion and purpose. Upon returning to our rooms, I am sure both of us took stock of the deadlines and responsibilities we had to our publications. I know, speaking for myself, that I spent the remainder of the night looking over the results of the Stack’s Bowers sale of the Eldorado Collection. It went gangbusters!

Closing out our time at the show, the last piece of footage I shot was of Mike sitting at the Nomos booth taking in a beautiful dekadrachm of Syracuse.

At a show filled with ancient treasures, what more could you want?

Ultimately, the success or failure of my trips to New York and Tampa will be measured by audience engagement and feedback. Sponsors want customers and we have to show them that our audience has a sustained interest in numismatics that can be measured in sales and dollars.

It has always been my opinion that most experienced customers already know from whom to buy and sell the best coins and that the un-initiated need to be steered towards the good guys – the ones that don’t have the shears at the ready every time a new flock hit the bourse.

At the end of the day, we try to provide the hobby’s intellectual food and share with you the stories and personalities that make numismatics a great hobby.

Showing you a rare coin out of context reduces it to an object that you will likely never see or own. And for the more common material, usually described only in press materials or through mintage and sales figures, these objects are simply art discs when you don’t dig deeper and tell the story.

The magic of a coin lies within the nexus of its own mystery and the interrelationship of all of the variables that tie it to the ordinary world.

I hope you will find that I succeeded on this trip in the days to come as I process my backlog of footage. I appreciate those of you who take the time to watch these videos and let us know how we’re doing.

It’s now Tuesday. I’ve been home just two days after two weeks on the road. Unlike Odysseus, who had his faithful dog Argos waiting for him after his long journey back to Ithaca, I had a grumpy Maine Coon cat impatiently waiting for me to serve up dinner. I’ll have to be quick about my work, though; in two more weeks I’ll be back on the road, this time to Berlin. And two weeks after that? Long Beach.

The cat’ll just have to wait.