By now, anyone who stays connected with the hobby, through social media or online chat rooms, knows that the recently completed ANA World’s Fair of Money (WFM) was a roaring success. The nearly 7,500 attendees were there to do business, and I have heard at least a dozen longtime dealers state that the 2021 WFM was their best show ever.

One interesting aspect of the 2021 WFM was the lack of official “ANA Auction Sales” during the week. Both Stack’s Bowers and Heritage opted to conduct their respective sales online the following week. This was done to reduce expenses and build on the success of their online-only strategy that was developed during the pandemic of 2020. The lack of distraction from tens of millions of dollars’ worth of coins being sold the same week may have contributed to the extra bourse action this year. It will be very interesting to see if this becomes the new normal going forward. The 2021 ANA World’s Fair of Money will long be remembered as the show with the display of the amazing Tyrant Collection exhibit, a 1933 Double Eagle (after setting a new price record in June of over $18 million) and the ship’s bell from the SS Central America. These were all covered by the local media, and it drew some of the 7,500 attendees.

I can personally state that if you did not see the Tyrant Collection of US coinage, you missed out on something special. The collection is a supreme example of dedicated collecting and connoisseurship. Seeing the King of Siam Proof Set alone was worth the trip to Chicago.

We have all seen the headlines by now of the many multi-million-dollar coins that have sold in the last few weeks. These coins are exciting to read about but have little impact on the average coin collector. Record prices do influence the market in general but are far removed from what most people collect. The bigger and more important picture for most is the expanded demand for a broad section of the market at all price levels.

The much-anticipated release of the 2021 tribute Morgan and Peace dollars by the US Mint has caused an unexpected surge in demand for the vintage issue. Carson City silver dollars have nearly doubled in the last 12 months. Prices for 1921 Peace Dollars have more than doubled in all grades. Demand and prices have risen across the board for these popular series. It will be quite the job when I attack the task of updating pricing for these in next year’s edition of the Redbook.

My personal experience from the ANA WFM demonstrates the broad demand for coins. Within a few hours, my inventory had been decimated by eager buyers. I had recently purchased an amazing complete collection of Dahlonega gold, all certified by NGC. My plan was to ask a reasonably high (or so I thought) retail price for the set and take names for when the set was broken up. The first dealer who saw me putting the coins out snapped up the entire set for well over $500,000, with minimal thought or negotiation.

I quickly realized this was going to be an exciting week.

After the show was over Saturday afternoon, it was time to pack up for the trip home. This is an interesting process, as it gives me a chance to study my unsold inventory. The process is informative on several levels. The unsold coins probably the result from one of the following:

For contrarians who do not enjoy buying coins that have recently doubled in price, you may find an opportunity in knowing what the market currently shuns. Colonial coinage is still somewhat soft due to over-supply. A staggering number of world-class collections entered the market in recent years, and more are scheduled to come. Heritage Auctions will be selling one of the largest collections of Massachusetts Silver ever assembled over the next year or so. Prices for these and most other coins from the Colonial period continue to be under pressure. Now may be a great time to consider adding a few trophy Colonial coins to your collection.

Proof nickel coinage from the 19th century used to be one of the true bellwether coins for the market. During the heat of the 1980s bull market, these coins reached staggering heights before falling 80 to 90% in price. The prices have remained depressed for almost 40 years. My inventory of Proof Three-Cent Nickels, Shield Nickels, and Liberty Nickels was relatively untouched at the end of the show.

It is somewhat surprising as these series are relatively easy to collect with very few “stoppers” that would make the sets unaffordable. The one difference for these series is collectors now place a premium on coins with Cameo or Ultra Cameo devices. These are more in demand from type coin buyers. A Gem collection of Proof Liberty Nickels can be assembled over time for under $15,000.

Liberty and Barber Proof coins are found with wildly different appearances. Despite the relatively low mintage and price, the series usually go unsold unless they are stunning. Coins with beautiful toning or frosty white surfaces sell fairly well. Unfortunately, only about 20% of the coins seen fall into this category.

Although we sold quite a few silver and gold commemorative coins, there were still some lingering at the end of the show. Prices for these have been depressed for decades and are only now showing signs of life. Buyers are fussy about quality and shun darkly toned coins. Quite a few marketing firms are buying the classic commemorative series, for which prices will probably start to increase in the near future. I would suggest buying a few of your favorites while you can.

It might be a good time to invest in a trophy coin from the Proof gold series.

Surprisingly, I had a few Proof gold coins in stock at the end of the show. Except for the Double Eagles or amazing quality coins, these are somewhat flat in the marketplace. These extremely low-mintage coins (usually less than 100) are great bargains, in my opinion. A Gem Proof Gold Dollar can be purchased for less than $10,000. It might be a good time to invest in a trophy coin from the Proof gold series. My good friend John Dannreuther recently published an outstanding book about Proof gold coinage, and this should be your first step before making such a large numismatic investment.

Finally, I should mention the weakness in generic gold coins. 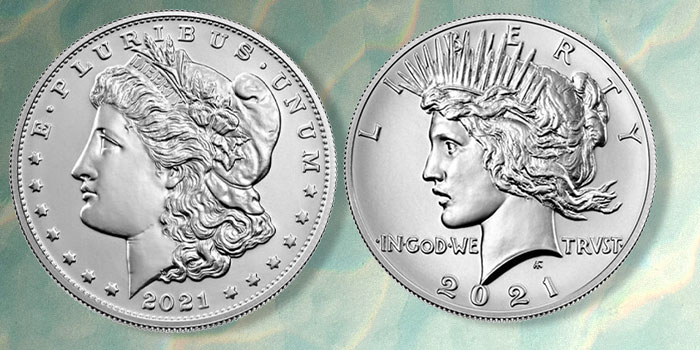 There has been an oversupply of these in the last few years, and prices are somewhat better but still depressed. I am personally in favor of buying Gem examples if possible. These are found in large numbers much less often from European bank hoards. Most denominations are trading near historical lows and represent great value. A superb gold dollar from the 1880s can be found for less than $1,000.

When considering buying any coin for purchase, just keep in mind one of the above suggestions. Today’s buyers are more sophisticated, and coins that are unattractive for the grade are hard to sell. This will be the case for the foreseeable future until uninformed investors rush into the market. The key is to concentrate on buying quality, and you will be rewarded when it comes time to sell.

Before you buy one of the modern tribute 2021 Silver Dollars or one of the vintage Morgan or Peace Dollars that have recently doubled in price, consider some of the coins that have been left behind.