If you’ve been around the coin market for a while, you know that there are many different types of rarity. In this article, I’m going to discuss the types of rarity you might already be familiar with, and one which you might not: the eye appeal or “appearance” rarity.

The first—and most traditional—type of rarity is absolute or fundamental. An absolute rarity is a coin that is rare in any grade. An example of this would be an 1883-O eagle, of which only a few dozen or so are known from an original mintage of just 800 coins. Even a cleaned “no grade” example of this issue is worth close to five figures, and most collectors would be happy to own an 1883-O eagle in nearly any grade.

The second type of rarity is a condition rarity. This is a coin which is not rare from an absolute or fundamental sense, but it is rare in high grades. An example of this would be a 1901 eagle in MS67. In grades up to an including MS65, the 1901 is an ultra-common coin and it is generally sold as a “generic” with essentially no date premium. In MS67, this date is very rare with a population of only 5 at PCGS and 117 at NGC. An average-quality-for-the-grade piece is probably worth around $15-20,000 in today’s market; considerably more if it were the sole PCGS coin and it had CAC approval.

A new type of rarity is the “Set Registry” or “plastic” coin which is similar but different from a recognizable condition rarity. In the current market, collectors will pay thousands of dollars for coins such as a 1950-S cent in PCGS MS67. In fact, someone just paid a remarkable $9,400 to purchase a population 1/0 MS67+ Red example of this date in the September 2014 Heritage sale. [Editors Note: Today the Pop is 32 and the PCGS Value is $100.] This same date is worth less than $40 in MS66 Red and probably less $30 raw. Examples of similar “plastic” rarities exist through the modern coin market.

As I have written many times before, one of the consequences the internet has placed on the coin market is a premium for coins with a great appearance (what we numismatists refer to as “eye appeal”) due to the importance of images on dealer’s websites or auction sites. Many coins are now bought sight unseen or based mostly on high-quality images and coins that “look great” are accorded a higher premium than ever before.

This is compounded by CAC. This service further increases the demand for pretty, original coins by tending to only sticker those coins with a premium appearance. This has, in turn, created what I refer to as an “appearance rarity.”

In the rare date gold market, there are many issues, especially those struck between 1840 and 1880, which are almost never seen with good eye appeal. These issues were often struck in limited quantities to begin with and often have survival rates in the 1-3% range. This is compounded by the fact that these issues were shipped loose in bags from the mint(s) to local banks, roughly handled in local commerce, not often saved by collectors (almost no one collected gold coins by date until the early part of the 20th century), and when they did survive, they were often cleaned or mishandled by unknowing collectors.

What this means is that many issues which are already absolute rarities (in most cases, this means that around 100 or so exist in all grades) are extremely rare with good eye appeal.

Let’s look at a few examples of dated gold coins which I regard as appearance rarities. The first coin is an 1854-S eagle graded AU58 by PCGS and approved by CAC. By the standards of No Motto San Francisco eagles (1854-1866), this is a relatively common date in grades up to AU55. It is fairly scarce in AU58 and it is genuinely rare in Uncirculated. The combined PCGS/NGC population in AU58 is 72 (PCGS is 18 while NGC is 54) although these numbers are way inflated by resubmissions. Assuming there a few dozen properly graded AU58’s, this make the 1854-S eagle a scarce coin this grade.

How rare is the 1854-S eagle in AU58 with good eye appeal? In my experience it is extremely hard to locate and this opinion is somewhat validated by the CAC population of eight. It should be pointed out that this figure is likely inflated by resubmissions (based on how few I’ve seen in 58 holders with CAC stickers and how few have appeared at auction). Clearly a nice AU58 1854-S is a scarce to very scarce coin based on its grade but it is a rare issue based on its appearance.

The coin in question is not approved by CAC but it is a nice PCGS AU53 coin. 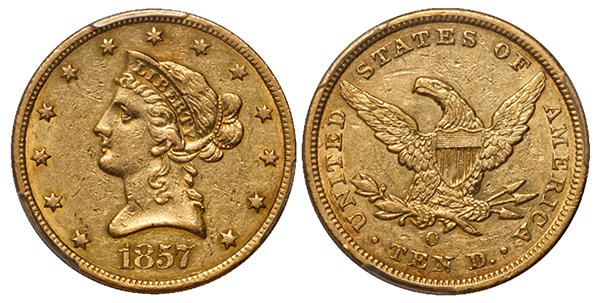 Only 5,500 were struck and it is likely that fewer than 100 exist in all grades. So we can easily determine that the 1857-O eagle is a scarce to very scarce coin from an absolute perspective. Looking at the certified populations, PCGS shows 10 having been graded in AU53 while NGC shows 11 for a total of 21. Accounting for resubmissions, this might equate to a dozen coins in this grade. This shows that the 1857-O is conditionally very scarce to rare although it is sometimes obtainable in AU55 or even AU58.

But a quick search of CAC’s database is more revealing with just two approved in AU53 and three finer (one in AU55 and two in AU58). As might be expected, the 1857-O is a true appearance rarity and a CAC approved AU53 or AU55 will prove extremely hard to locate.

The third and final coin we are going to look at is an 1865-S Normal Date eagle in PCGS AU53 with CAC approval. This variety is rare in all grades with an estimated 40-50 known, mostly in VF and EF. The PCGS population is just one with none finer; NGC shows two in AU53 with 10 finer (this is inflated by resubmissions) with the best being an AU58. These numbers immediately show that the 1865-S Normal Date eagle is an absolute and a condition rarity.

As one might expect, this variety is also an appearance rarity. CAC has approved just three in total with one in AU53 (the coin depicted above) and an NGC AU58.

The current rare date gold market has seen a real spike in demand for these trifold rarities: coins that are rare in terms of the total known, rare in high(er) grades, and rare from the standpoint of above-average eye appeal for the issue. And I would expect that coins that tick all three of these boxes are the ones that show the greatest potential for future price increases.