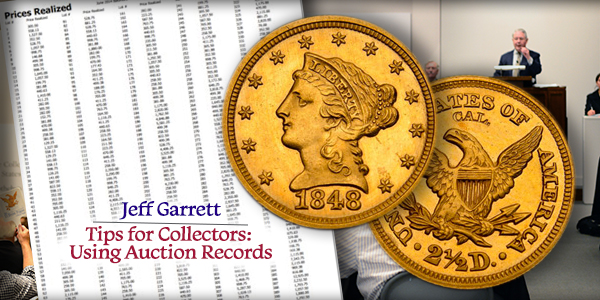 Auction records have become an invaluable tool, but knowing how to use them can be very important.

It’s hard to believe, but in the mid-1990s there were no such things as electronic auction records for collectors or dealers to search before making a purchase. There were quite a few price guides, but most contained information that was dated at best. The only auction records assembled and published were done on an annual basis. They were very difficult to use and it was impossible to carry all of them to conventions for reference.

I had begun several numismatic research projects and soon realized the need for a searchable database of auction records. For several years we hired college students to input the auction data into an Excel file in a searchable format. It was not long before the value of this information became very apparent. Using this new tool I was able to make some great purchases. At one convention an 1848 CAL. Quarter Eagle showed up. With my auction records I could easily determine that these coins sold for much more at action than current price guides indicated. It was then that we decided to devote considerable resources to compiling at least 10 years of past auction records.

Today, auction records are one of the primary sources of information for many when making a purchase. Price guides give you an indication of value, but auction records tell what actual coins have sold for. Auction records have become an invaluable tool, but knowing how to use them can be very important. These auction records can be quite confusing, as it is not uncommon for the coins in the same grade to sell for vastly different prices. There are many factors that must be taken into consideration when using auction records.

In recent years collectors have begun to assign much higher values to coins with great eye-appeal. This means coins that may be technically nice, but also have really superior luster, toning, strike and appearance. These coins sell for premium prices – in contrast to coins that may be accurately graded but are for some reason unattractive. This would include coins with dark toning, dull luster or weak strike. The auction price of these unattractive coins can sometimes be well below published wholesale prices. It is a widely held concern by many that the auction prices for unattractive coins is dragging down all prices for rare coins.

On the opposite end of this spectrum are the sometimes-crazy prices that coins sell for that some deem undergraded. A recent Heritage auction featured a group of gold coins that had been off the market for decades. Dealers aggressively competed for this fresh material and many coins sold for record prices for the grade. For anyone checking auction records, this data would be very confusing. Auction buyers also pay what some would consider insane prices for coins with vivid toning. It is not uncommon for silver dollars and silver commemoratives to sell for many times listed guide book prices. When using auction records you should only rely on prices of coins with multiple sales in recent years. For coins with only one or two sales, the information can be unreliable. Sometimes only two bidders can run the price of a coin up to unsustainable levels. For many Registry set coins, the market can be thin and the lack of just one buyer can have a substantial impact. Just because two buyers are engaged in mortal combat over a coin at auction, you have no way of knowing if this would happen again. In most cases it would not.

Another issue that should be considered is the auction fees the seller must incur to sell a coin at auction. They usually run about 8-15% of the final price. Therefore, when you see an auction price of $5,000, the seller probably only received about $4,250. This should be a factor when negotiating the purchase of a coin. If you pay the same $5,000 auction price that a similar coin sold for, you could only expect to receive about $4,250 if the coin was resold at auction.

Believe me, these auction fees add up and must be carefully considered when buying or selling.

To properly use auction records you should also carefully examine the photograph of each coin you research. Most auction houses now have great websites that can be easily searched. They also have wonderful images that you can use to compare with similar coins that you are considering. This is extremely important as we have discussed earlier the wide variance that coins of the same grade can sometimes sell for.

Auction records are not the perfect pricing tool and they can sometimes be confusing. They are useful, however, and you should learn how to use them. The NGC website has amazing auction records information for United States, world and Ancient coins. This vast database will be helpful regardless of what you collect.