As an avid numismatist, I tend to be attracted to coins that tell a story. While I of course appreciate the sheer elegance and beauty many coins display, I also seek out individual pieces that bear witness to history. For this article, I used the same criteria for selecting the following 10 coins as I use in my own collecting journey and, in fact, I own one of the pieces on this list.

When asked what I considered to be the top “Ten Coins I’d Love to Own” for this CoinWeek series, I eschewed price as a factor. Therefore, the coins in my list range from a few hundred to upwards of half a million U.S. dollars. While there are definitely collectors who can afford coins with such high prices, I personally cannot. So by default, price becomes a non-issue when compiling such a list since placing a premium on affordability would severely limit my choices.

Additionally, while I tend to focus mainly on ancient coins for my writing, I collect all types, including modern world and U.S. coinage. That being said, here are my top 10 coins I’d love to own, in order of desirability.

Struck between 305 and 295 BCE, this numismatic masterpiece of Seleucus I demonstrates not only the exceptional skills of ancient engravers but also shows how image-focused ancient rulers were. The reverse of the coin depicts Nike, the goddess of victory, placing a wreath on a military trophy commemorating Seleucus’s early victories over the upper satrapies of Alexander the Great’s empire and his own royal ascension in 305 BCE.

More interesting, from a historical perspective, is the controversy over the obverse image. Most modern numismatists agree with the noted scholar R. A. Hadley who argued that the figure wearing the bull-horned helmet was a combined representation of Alexander the Great and Dionysus. The counter-argument, which I personally agree with, was put forward by Oliver D. Hoover, who posited that it is, in fact, a portrait of Seleucus, with the divine attributes of Dionysus.

In poor condition, these coins can cost as little as $5,000. High-grade examples, such as the one above that hammered for $15,500 in a 2018 auction, can reach quite a bit higher. Other high-quality examples have even been known to sell for over $50,000

For many, this silver tetradrachm of Tigranes II would not even come close to their top 10. Nevertheless, this ancient Armenian coin has always held a certain allure for me. It stands as proof of an extremely interesting period in time when a small yet vitally strategic kingdom rose to power as the vast Seleucid Empire sharply declined – all the while overshadowed by the ever-expanding dominance of Rome. Interestingly, Tigranes II is portrayed here in a similar manner to a Seleucid emperor, and besides his headdress, the coin doesn’t show any distinct ethnic characteristics.

While rare in such a good state of preservation, this type is not in and of itself rare. They are, however, rather scarce, which leads to a higher price tag than other coins of the period. Even though the example above sold for $2,400 in 2006, many can cost two or even three times as much with some examples costing $7,000 or more. 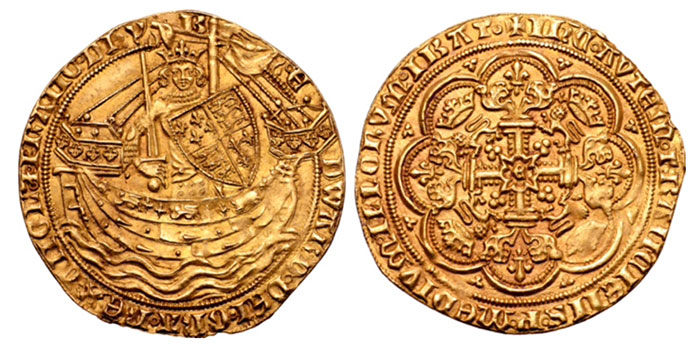 This Fourth series and Pre-Treaty Noble, struck by King Edward III in 1354-5 CE, was not only the first widely used gold coin in England but also the largest gold coin of the day in Europe by weight. It depicts the king standing behind a warship on the obverse and an intricate short cross design containing crowns, lions, and other royal symbology on the reverse. Most likely struck to facilitate banking and other large transfers of wealth, these coins pay homage to England’s victories over France in the early years of the Hundred Years War. These massive coins also came in more common halves and quarters.

Despite some light edge shaving, the example above is particularly pleasing and as such hammered for the high price of just over $7,000. While some examples in worse states of preservation can cost as little as $3,000, it is not uncommon for pieces similar to the one above to cost $4,000 to $5,000.

I find this mnaieion very interesting for several reasons. Firstly, the imagery on this large gold coin from Ptolemaic Egypt is highly irregular for the time period. With the double jugate busts of Ptolemy II Philadelphus and Arsinöe II on the obverse and Ptolemy I with Berenice I on the reverse, this coin forgoes the standard imperial imagery normally found on ancient coins. Instead, it relies purely on the power of royal portraits coupled with terse legends. The obverse legend states AΔEΛΦΩΝ, which means “sibling lovers” in reference to the Ptolemaic tradition of incestuous marriages, and the reverse ΘEΩN or “gods”, which alludes to the newly divine status of the empire’s founding ruler.

My second reason for choosing this coin is that was the highest denomination coin of the age. One mnaieion was worth up to one mina of silver, which weighed the equivalent of 50 shekels or one hundred silver drachmai.

Due to their relative rarity and large size, these gold coins command a high market value. The example above realized $34,000 at auction in January 2021, which is high for this type. Most examples sell for between $10-20,000, it is however possible to find less expensive examples. “City View” thalers, produced from the mid-1600s to the late 1700s, are a beautiful window into the past. While all thaler denominations (2, 1, ½, and 1/4 thalers) display these designs, the 1 thaler was by far the most popular. Showing the historic skyline of Nuremberg in Bavaria, this handsomely toned example provided a chance for the imperial engravers to showcase the wealth and power of the Holy Roman Empire. Central to these designs are the church towers that dominated Europe’s cities for centuries; these are usually topped by the triangle with rays that represents the holy trinity.

Nuremberg City View thalers, while beautiful even in low grade, can be purchased at reactively low prices. For example, certain pieces that are damaged or highly worn can be obtained for two to three hundred dollars. On the opposite end of the value scale, high-grade rarities may cost $5,000 to 10,000. 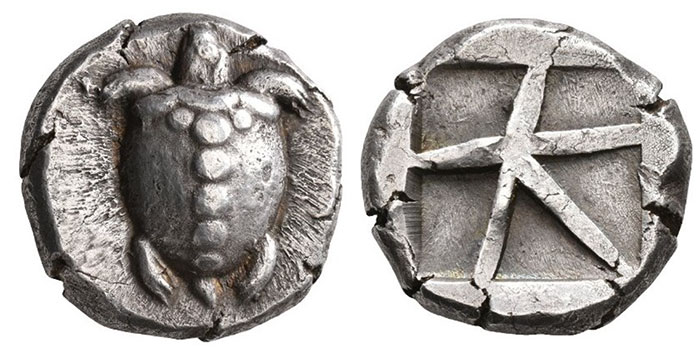 One of the most recognizable early Greek coins, the turtle stater of Aegina, is considered to be one of the first “trade dollars”. First struck around 550 BCE, the coin was symbolic of the Island’s sea trade and maritime power. While the design evolved over time (this specimen was minted circa 480-457 BCE), they remained generally the same until Athens destroyed the island’s naval power. Subsequently, the design changed from a sea turtle to a land tortoise. These coins tell the story of the decline and evolution of a powerful state.

While historically significant, turtle staters were produced in large numbers. Consequently, it is not difficult to find solid examples for three to four hundred dollars. There are, of course, higher-grade and more expensive types. For example, the coin pictured above realized over $5,500 at auction in October 2020.

While many collectors of modern coins view “chop marks” or “banker’s marks” as post mint damage and as a detracting feature on coins, I disagree. While the host coin in this instance is relatively standard, the chop marks elevate it to a piece of significant interest for me. The chop marks can tell us the story of this United States Trade dollar minted in 1875 at San Francisco.

While many will remain anonymous and untraceable, some chop marks can be tracked to certain countries and even individual merchants. Overall, they are a tangible link to the coins’ travels and experiences.

Because many collectors do not value chop-marked coins, they usually trade for less than their unmarked counterparts. While the example above realized only $110 at auction in November 2020, a non-chop-marked type of the same date, mint, and grade costs $350-400. 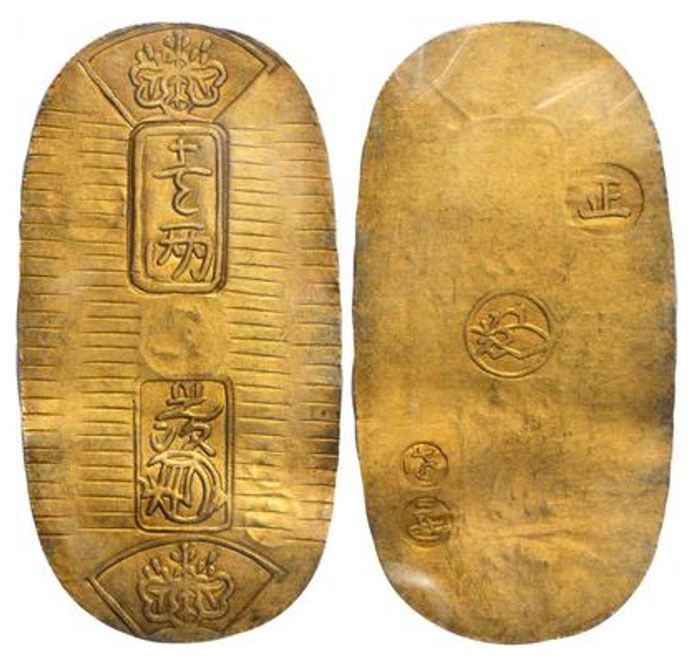 Minted during Tokugawa shogunate of Japan, these coins are proof of the interactions between Western colonial powers and the isolationist regional lords (daimyō). While Japan’s domestic economy was reliant mainly on rice, the Portuguese and other foreign traders wanted hard specie in return for their trade goods. As a result, the koban was introduced. Each gold koban was worth three koku, each of which was equal to the rice needed to feed one person for a year. Struck between 300-270 BCE, this stunning silver stater from the ancient Greek city of Knossos on the island of Crete pays homage to their most famous Minoan myth: the Minotaur and the Labyrinth. While the historical Minoan palace uncovered at Knossos may be the origin of this myth, it grew in importance over the centuries until it became central to the canon of Greek mythology. By using this mythological symbol on their coins, the city was reaching back in time to demonstrate their cultural and religious importance. Such is the power of coins as tools for propaganda.

Due to its rarity, provenance, toning, and condition, this example hammered for the high price of almost $80,000. In the past two decades, lower-grade versions of this type have sold for two to three thousand dollars. However, later Roman coins from Knossos that depict the Labyrinth can be acquired for less than $500 when they come to market. Struck in 1915 as part of the Panama-Pacific International Exposition, this large private issue is a celebration of San Francisco’s rebirth after the devastating 1906 earthquake and the 1914 opening of the Panama Canal. While initial sales of these gold pieces were disappointing, they have proved to be an enduring testament to the skills of early-20th-century American engravers. Personally, these are my favorite non-circulating American coins.

Due to their eye appeal and historical significance, these rare octagonal coins can cost a significant amount of money. While the prices vary significantly, a VG10 (the lowest recorded grade in the PCGS population report), is priced at $38,000. For the highest grade in the PCGS registry, an MS66+, the estimated value can be as high as $300,000.