By Doug Winter for RareGoldCoins.com ……

Douglas Winter Numismatics sold two very rare and very beautiful Proof gold dollars several years ago from the Civil War era. These were an 1862 graded Proof-64 Deep Cameo by PCGS, and an 1864 graded Proof-66 Deep Cameo by PCGS. Both coins had also been approved by CAC. I’d like to share some information about these pieces with you and discuss very rare but comparatively affordable Proof gold from this era as well.

The rarity of Proof 1862 gold dollars is not widely recognized, probably due to the fact that business strikes are very common and were minted to the tune of 1.36 million pieces. Proofs are another story with just 35 coins struck for collectors. On the PCGS website, it states that “between 18 and 25 are known,” but this number seems high to me given the typical survival rate for small-size gold proofs of this era. I believe that the number known is more likely in the area of 15 to 18, with the average piece grading PR64 to PR65. 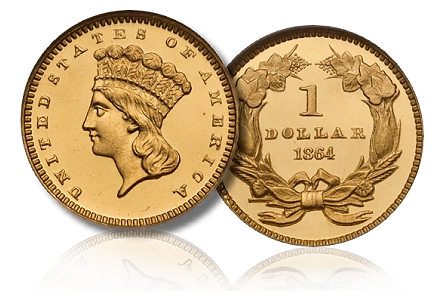 The 1862 dollar that is illustrated above is a choice enough coin for the grade that I think it merits a paragraph or two to discuss why it is “only” a PR64.

While not necessarily clear on the image, there are a few very light hairlines on the obverse that very narrowly preclude a PR65 grade. How hairlined can a Proof gold coin be to still garner a PR65 grade?

Back in the early days of PCGS and NGC, the grading services were extremely strict when grading Proof gold. A coin with any signs of friction or hairlines (even hairlines that were not from past cleanings) was automatically knocked out of the Gem level and this meant that larger denomination Proofs (specifically eagles and double eagles) were almost never seen in PR65 and were essentially unknown above this.

In today’s market, a Proof gold coin can have a few very light hairlines and still grade PR65. But in order to garner a PR66 or higher grade, a coin has to be exceptional. And what about lintmarks or other mint-made features on the surfaces? Lintmarks (which are cause by polishing the blank planchets before striking in order to attain a highly reflective surface) are generally overlooked in the grading process unless they are extensive or they are situated in extremely obvious focal points such as the cheek of Liberty or exposed in the left obverse field.

In 1864, mintages of Proof gold coins actually increased to 50 pieces. Given the severe economic climate of the war-ravaged country, this seems like wishful thinking on the part of the U.S. Mint, and it is likely that at least some of these coins went unsold and were melted.

PCGS estimates that “17 to 22 examples survive.” As with many of their estimates, I find them a bit on the high side. My guess for total number known is around 14 to 18, and this is based on the fact that there are only 12 auction appearances for Proof 1864 gold dollars dating back to the early 1990′s.

The 1864 gold dollar is rarer than than the 1862 in high grades with at least a few pieces known in the PR62 to PR63 range. It is extremely rare in Gem, and there appear to be around four or five known that grade PR65 and higher grades.

As of the end of October 2011, PCGS had graded seven in all. The best non-cameo was a single PR66, while the best Deep Cameo was the PR66 DC shown above. NGC shows a very inflated population of 16 in all grades. The single highest graded was a PR67 Cameo. They have also graded two in PR66 Ultra Cameo.

The aforementioned NGC PR67 Cameo has never appeared at auction and I have not seen it. The record price at auction is $32,200, set by Heritage 10/11: 4625, which sold for $32,200. This is the exact coin shown above. I bought it for a client in an NGC PR66 Ultra Cameo holder, crossed it to a PCGS PR66 Deep Cameo holder, and received approval at CAC.

This coin has terrific overall eye appeal with deep, reflective fields that are strongly contrasted by the devices. There are a few very small lintmarks (as made), but no hairlines.

It is interesting to note that the collector I purchased this coin for has been working on an 1864 gold proof set for a number of years. The gold dollar was the last coin he needed and the set is now complete. I find this to be a real endorsement of the rarity of the 1864 gold dollar in Proof; given that this collector was able to find the rare (and expensive) eagle and double eagle of this year before he could locate the humble (and more affordable) gold dollar.

Which brings us to the final topic of this blog: it has been said again and again that Proof gold is the “caviar” of American numismatics. There is no question about the fact that Proof gold is an expensive area to collect and that specializing in this area of the market is ambitious, to say the least.

But within the area of Proof Gold, there are pockets of value. I have always liked the smaller-size (dollar and quarter eagle) issues with mintages of 50 or fewer in PR63 to PR65 grades. As an example, the 1862 dollar that I discussed above was a beautiful PCGS PR64 Deep Cameo example with CAC approval. Without knowing the market, would you care to venture a guess of this coin’s value? $20,000? $30,000? More?

Surprisingly, I listed and sold this coin in the mid-teens.

Say a collector had a budget of $30,000-40,000 to spend each year on Proof gold. Would he be better off buying a few relatively common coins in exceptional grades (an example of such a piece would be a 1902 quarter eagle in PR67 cameo) or a few very rare coins in choice but not as spectacular grades?

Being someone whose numismatic decisions are typically based around rarity, I’d go with two very rare low mintage coins in the $20,000 range as opposed to one more common but spectacular coin in the $40,000 range. The exception would be if I were putting together a type set of Proof gold and I needed just a single example of each type. Then, I would tend to go with a coin like an 1886 gold dollar in PR66 as opposed to, say, an 1866 gold dollar in PR64.

Do you have questions about Proof gold? Feel free to contact me via email at [email protected] and I would be happy to answer them for you.