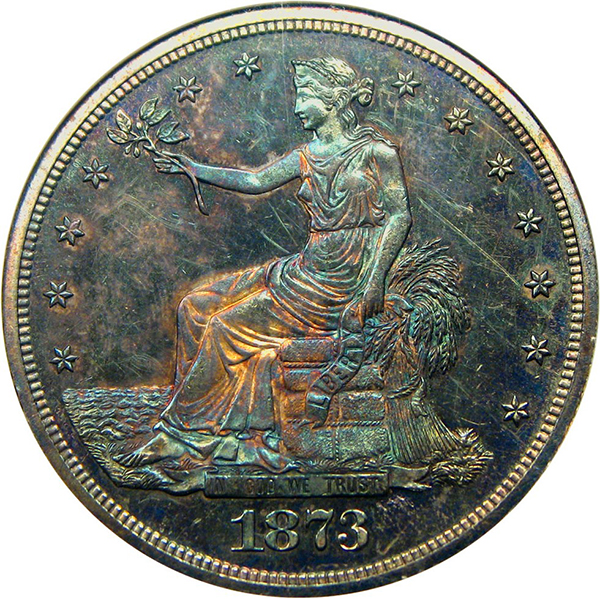 Throughout history, certain coins, often silver ones like the trade dollar, have circulated around large geographical regions far from their place of origin. The Maria Theresa thaler, the Spanish dollar, the Athenian owl – all were accepted as legal tender far and wide because of their precious metal content and reliability.

During the Age of Exploration and subsequent Age of Imperialism, the Spanish silver dollar became perhaps the most important coin in the world. To compete, many nations produced their own trade coinage made of silver, and in the second half of the 19th century, the United States produced the Trade Dollar.

Minted as a regular issue between 1873 and 1878, with a smattering of Proofs created from 1879 through 1885 (presumably for collectors), the U.S. trade dollar consisted of 27.22 grams of .900 fine silver. This was slightly more than the 26.73 grams found in the previous legal tender Liberty Seated silver dollar used within the continental United States. The extra weight was intended to match that of the Mexican silver coins then favored in China and among other East Asian nations.

The U.S. Trade Dollar was authorized by the Coinage Act of 1873, which had, incidentally, ended the production of the silver dollar as a domestic coin, leading to the law’s nickname the “Crime of ’73“. The law also made Trade Dollars legal tender in the United States proper, but circulating a coin with a face value of less than the worth of its precious metal content is a situation rife for speculation and corruption. The “loophole” was closed in 1876 when the Trade Dollar was demonetized.

In the first year of issue, 396,635 business strike Trade Dollars were produced at Philadelphia. A total of 865 Proof strikes are reported to have been made, but as the Mint did not keep precise records about the production of Trade Dollar Proofs, the number is an educated guess at best.

Many Numismatists make the argument that the following section of the Coinage Act of 1965 re-monetized the Trade Dollar:

All coins and currencies of the United States (including Federal Reserve notes and circulating notes of Federal Reserve banks and national banking associations), regardless of when coined or issued, shall be legal tender for all debts, public and private, public charges, taxes, duties, and dues.

If, in fact, the Trade Dollar was once again legal tender in the United States as of 1965, even as illustrious an authority as the Red Book acknowledges that it was due to a mistake in the writing of the law and not legal intent (Bressett, 19).

The following description is based on the coin images accompanying this profile, supplied courtesy of David Lawrence Rare Coins

Resembling a lady of the early Roman Empire bedecked in a Doric chiton and tiara, Liberty sits upon a throne of bales. Her head skirts the top of the obverse, and her left foot is bare. A sheaf of wheat rests behind her. In her right hand, which is extended to the rim of the coin, she holds an olive branch symbolizing peace. In her left hand, a scroll with the word LIBERTY on it unfurls along the side of her commercial throne. Beneath the throne is a banner with the motto IN GOD WE TRUST. Liberty is situated atop a base of grass that sits next to the waves of the sea. The base and the sea together reach from one side of the coin to the other. It is slanted at an angle beneath her, providing for some depth and perspective.

In the exergue below the central design is the year 1873. Dentils encircle the entire side.

The coin included in David Lawrence’s Internet Auction #948 is a richly-toned Proof specimen, graded ANACS Proof 60. The fields and such incuse areas as the motto are toned a dark blue or black. Areas of higher relief are relatively untouched. Liberty’s torso and hem appear to bear a coppery green patina, while a bright orange-russet-yellow coloration is predominant near her lap. Subdued orange-red and russet tones are found throughout. The main motif on the reverse is an eagle that appears naturalistic in nature while also leaning towards the heraldic. Its wings are away from the body, its feathers pointing down. Its head is turned towards the right. The eagle grips three arrows in the left talon and an olive branch in the right. There are three berries and the bottom arrowhead does not go past the zero in “420 Grains” on the 1873 reverse.

Like on the obverse, the entire design is encircled by dentils.

There is quite the contrast between the chromatic black toning of the fields and incuse areas and the golden coppery color found on the higher relief aspects of the design, especially among the feathers in the eagle’s wings.

The edge of the 1873 Trade dollar is reeded.

William Barber was the fifth Chief Engraver of the United States Mint. He produced designs for the Trade Dollar, the Twenty Cent Piece and numerous patterns. Barber’s son Charles succeeded him as the Mint’s Chief Engraver.