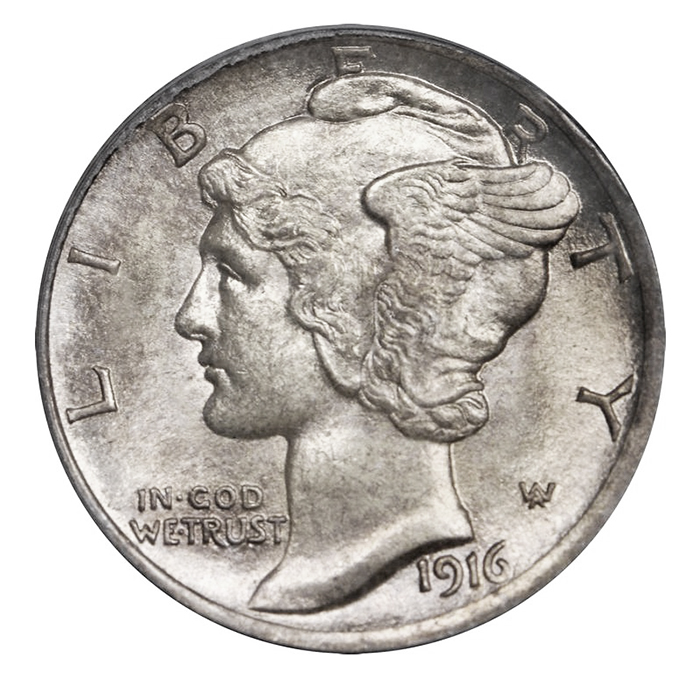 The Mercury or Winged Liberty dime (1916-1945) has long stood as an iconic coin in the U.S. series. The coin’s elegant design draws heavily from the French Beaux Arts movement of the late 19th century. Its release immediately preceded the Roosevelt dime (1946-Present), and it is the last U.S. dime to be struck entirely in .900 silver.

In the year of the coin’s initial release, Americans were introduced to what would become three iconic U.S. coin designs. The other two were the Walking Liberty half dollar (also designed by Adolph Weinman and the basis of the American Silver Eagle bullion coin’s obverse design) and the Standing Liberty quarter (designed by Massachusetts-based sculptor Hermon Atkins MacNeil). These coins joined the Indian Head (Buffalo) nickel, the Lincoln cent, the Indian quarter eagle and half eagle by Bela Lyon Pratt, and the Saint-Gaudens $10 and $20 gold coins.

Heralded for its beauty, the Winged Liberty dime–often referred to as the Mercury dime due to its classically-inspired headgear–saw the country through both World Wars and the Great Depression. Its unmistakable design was attached to both the March of Dimes anti-polio campaign and countless Charles Atlas advertisements found in the back of comic books and magazines. When “Yip” Harburg wrote the song “Brother, Can You Spare a Dime?” (1932), it was the Mercury dime he was talking about.

The Mercury dime’s term of service came to an unexpected end, when on April 12, 1945, President Franklin Delano Roosevelt died. A transformative President, FDR worked alongside allies to defeat the axis powers in World War II. He established a social safety net for millions of Americans after a debilitating global depression and set in place a system of income distribution that created the vibrant American middle class that ushered in a prolonged period of postwar economic prosperity. Americans greeted his loss with shock and despair, his funeral tour was reminiscent of the one undertaken 80 years earlier after the traumatic death of Abraham Lincoln.

Almost immediately, a movement began to honor Roosevelt on a circulating coin. The dime was the obvious choice as the denomination recalled both Franklin’s battle with polio and his work with the March of Dimes. On May 17, Henry Morgenthau, Jr., who served as Treasury Secretary under Presidents Roosevelt and Truman, announced that the Winged Liberty dime design would be replaced by a new design featuring the portrait of the late president. It was expected that the Roosevelt dime would debut at the end of the year, but the new dime was not released until 1946.

Untold tens of thousands of original Mercury dimes, including, unfortunately, some scarce dates, were melted in the silver run-up of the early 1980s. While a number of conditional rarities exist, the series is generally remembered for two key dates: the 1916-D and the scarce 1942/1941 overdate.

Numismatists have speculated for years that the Denver Mint halted production of the new dime design shortly after an initial production run so as to devote resources to the production of quarters. Q. David Bowers notes that the first delivery of 1916-D dimes took place on December 29, which means that the 1916-dated dime did not enter into circulation until 1917.

The coin did circulate, as evidenced by the number of well-worn examples that exist in the marketplace. Mint State examples are rare, with choice examples bringing over $12,000 USD in today’s market. Gems and examples with Full Bands are even more challenging. A nicely toned MS67FB with CAC approval brought a record price of $207,000 in an August 2010 Heritage auction.

As this is one of the most counterfeited U.S. coins, it is highly recommended that collectors buy only certified examples, even in grades as low as AG-03. Most fakes are accomplished by adding a “D” mintmark to a genuine 1916 dime.

The letters E and R are partially obstructed by Liberty’s cap. The designer’s monogram (a “W” surmounting an “A”) appears behind Liberty’s neck below and to the left of the Y in LIBERTY. The date “1916” appears below the bust truncation, to the rear. A subtle basin creates a dish-like appearance in the field. apping around the top of the design is the legend: UNITED · STATES · OF · AMERICA. Wrapping around the bottom of the design is the denomination: ONE DIME. Two five-pointed stars separate the legend from the denomination. The D mint mark of the Denver Mint is located to the right of ONE. The motto “E PLURIBUS UNUM” (OUT OF MANY, ONE) appears to the right of the fasces, slightly below center.

The edge of the Mercury (Winged Liberty) dime is reeded.

Adolph Alexander Weinman was born in Germany and immigrated to the United States as a teenager. He studied and worked under such famous American sculptors as Augustus Saint-Gaudens and Daniel Chester French. Weinman is responsible for two of the most iconic coin designs in U.S. history: the Mercury or Winged Liberty dime and the Walking Liberty half dollar, both of which debuted in the annus mirabilis numismaticus of 1916. Weinman’s sons also became sculptors and coin designers, and he taught such pupils as Anthony de Francisci. Adolph Weinman died in 1952.