The Zerbe Proof 1921-S Morgan dollar is one of the rarest and most enigmatic issues of the Morgan dollar series. The Morgan dollar, known more officially as the Liberty Head dollar, is a silver coin that was struck at each branch of the United States Mint in operation between 1878 and 1904 and then once more in 1921.

This single-year output represented the largest Morgan dollar mintage of the entire series and was carried out pursuant to the 1918 Pittman Act, which called for the conversion to bullion up to 350,000,000 standard silver dollars for sale to Great Britain and for the repurchase of an equal amount of silver for the purposes of recoining. The law, authored by Nevada Senator Key Pittman gave had the dual benefit of aiding a key ally during a time of war and serving as a government subsidy to western mining interests.

The resumption of silver dollars ended a 17-year hiatus for the denomination. The American silver dollar, first issued in 1794, had a complicated and sputtering history throughout the 19th century and the Morgan dollar, which was struck in excessive amounts (as mandated by Congress), went largely went unused. The Pittman Act led to the culling of approximately 40% of the total mintage of the series. Most of these coins had never circulated and those that did spent only a brief time in commercial channels before being returned to the treasury, where they were rebagged and warehoused.

The same fate awaited the lion’s share of the 1921 issue as well.

As the Mint prepared to strike new dollar coins, a buzz of excitement overtook the numismatic community.

Not satisfied with the idea of a resumption of the Morgan dollar design, past American Numismatic Association (ANA) president Farran Zerbe spoke at the ANA convention and took to the pages of The Numismatist began to advocate for the striking of a new design to mark the end of the Great War.

Zerbe was a giant in numismatic circles and ever the numismatic promoter, but he was also a bit of a schemer and a polarizing figure. Q. David Bowers, in his piece “A Century of Numismatics 1901-2000”, published in the August 1998 Numismatist, remarked that Zerbe was less than forthright in his efforts to buy The Numismatist from its creator George Heath’s widow and he may have even engaged in election fraud and other “Machiavellian machinations while holding ANA office….”

Nevertheless, Zerbe was able to marshal support for his idea within the numismatic community, resulting in the introduction of legislation authorizing a change in the long-dormant denomination’s design. In the interim, however, the Mint had millions of Morgan dollars to strike.

Most scholarship relating to the Zerbe Proofs or Zerbe Special Strikes center around a conversation that Zerbe had with Stuart Mosher in the mid-1940s. In the July 1955 Numismatist, Mosher recounts Zerbe telling him that in 1921, he was “in California awaiting the arrival of the dies that were to be used to strike the first Peace dollars at the San Francisco Mint.” When the Mint phoned Zerbe to announce that the new dies had arrived, Zerbe made a beeline for the Mint only to be disappointed that the dies were for the Morgan design.

It was at this point, that Zerbe claimed to Mosher that the Mint struck 24 coins to alleviate his disappointment. The supposed date of this interaction is open to debate. In a 2004 sale of an example from the Thomas H. Sebring Collection, an American Numismatic Rarities cataloger suggests that the date of Zerbe’s visit coincided with the San Francisco Mint’s first strikings of Morgan dollars on May 9. This seems implausible, however, due to the fact that legislation authorizing the striking of Peace dollars was not introduced in Congress until that very day and the coins certainly did not go into production until December 28.

Regardless, the idea of Zerbe Special Strikings or Proofs entered into the numismatic mainstream with the publication of Mosher’s article and the controversial yet stubbornly influential numismatic researcher Walter Breen was happy to go along with the claim.

While Farran Zerbe may have claimed that 24 special strikes were made for him, to date, only five examples have satisfied the numismatic community as belonging in this group. Four are graded by PCGS, and the fifth, ungraded specimen is impounded in the collection of the American Numismatic Society (ANS), presumably acquired from Zerbe and the Chase Manhattan Bank.

The accepted diagnostics of the Zerbe strikes are easily discerned with the naked eye: sharp squared denticles border the rim, flattened stars that distinctly rise above the fields, and bold lettering throughout. The coins also feature two diagonal lines that descend from the denticles to the E and S in STATES. Another line connects the tip of the top serif of C to the denticles on the right side of the coin.

The finest known example (PCGS PR65 CAC) brought $117,500 at an August 2013 Heritage Auction. Three examples have been certified at the 64-grade level (although on the holder, various prefixes have been used). According to Heritage Auction’s published pedigree data, these coins can be traced back to the 1970s. The most recent price realized for a 64 was $94,000 for a CAC-approved example offered in June 2014.

The obverse of the 1921-S Morgan dollar exhibits the characteristic left-facing Liberty Head motif seen on all issues of this classic dollar series. The central Liberty bust wears a Phrygian cap encircled with a ribbon adorned with the inscription LIBERTY. Miss Liberty also wears a crown of wheat and cotton, which were two of the nation’s most lucrative natural agricultural assets in the 19th century.

The phrase E PLURIBUS UNUM is inscribed along the upper half of the obverse rim, and the date 1886 is centered at the bottom of the obverse adjacent to the rim. Seven stars appear between the left side of the date and the inscription E PLURIBUS UNUM, while six stars fill the gap between the date and motto on the lower right side of the coin. In total, the 13 stars represent the 13 colonies that combined to form the original Union of the United States. At the base of Liberty’s neck is the “M” monogram representing Morgan’s initial. 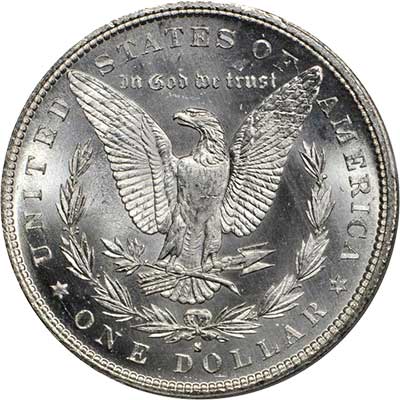 The reverse of the 1921-S Morgan dollar is dominated by a heraldic eagle, its wings spread across the upper half of the coin. Between the upper tips of the eagle’s wings appears the motto IN GOD WE TRUST. The eagle clutches an olive branch in its right claw representing peace and in its left claw are three arrows symbolizing the nation’s ability to defend itself. The central eagle design is partly encircled by a laurel wreath.

Along the rim of the upper two-thirds of the reverse is the legend UNITED STATES OF AMERICA, with the tip of the eagle’s left wings, which virtually touch the coin’s rim, penetrating the space between UNITED and STATES; the right wing visually divides the words OF and AMERICA. The words ONE DOLLAR, seen at the bottom center of the reverse, are flanked by a single, six-sided star on either side of the denomination inscription. The “S” mintmark, denoting that the coin was struck at the San Francisco Mint, is located above the DO of DOLLAR.

The edge of the 1921-S Morgan dollar is reeded.

Designer(s): Engraver George T. Morgan was born in Birmingham, England in 1845. He emigrated to the United States and began work as an assistant to Mint Chief Engraver William Barber and continued to produce patterns and commemoratives under the administration of Barber’s son, Charles. Morgan himself became Chief Engraver in 1917. He died in 1925.