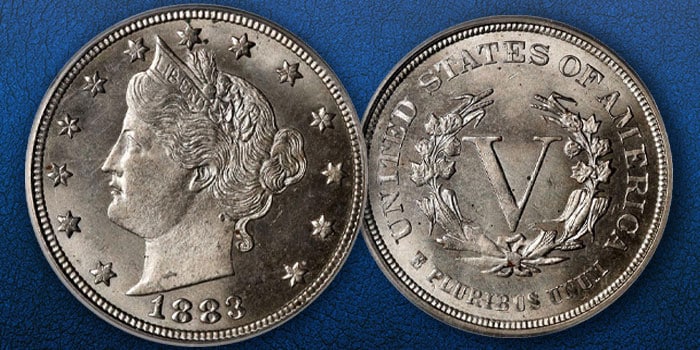 The Liberty Head nickel–or “V” nickel, as it’s more commonly known–was the second design style of the United States five-cent nickel coin. The design, the work of Chief Engraver Charles E. Barber, was a modest improvement over James B. Longacre’s Shield nickel, which had entered production in 1866 and served the nation for 17 years.

Barber’s design was heavily influenced by George T. Morgan’s silver dollar obverse, which entered into production in 1878. Comparing the two designs side by side is unflattering to the Barber nickel. Whereas Morgan’s Liberty is naturalistic and full-bodied, Barber’s Liberty is set at a slightly farther distance and is flat and lifeless.

Barber’s effort to redesign the nickel five-cent coin did not escape bureaucratic interference. In December 1882, after two years of refining his concept and believing that he had finished his work, Barber sent the designs to Mint Director Horatio Burchard for review, with the expectation that he and Treasury Secretary Charles Folger would quickly approve the designs.

The designs he sent featured the familiar left-facing bust portrait of Liberty with UNITED STATES OF AMERICA inscribed around the rim with the date below the bust truncation. The reverse featured a large Roman “V” surrounded by a vegetal wreath, with E PLURIBUS UNUM inscribed above.

Instead of accepting them, Folger, whom researcher R.W. Julian calls a stickler for the letter of the law, rejected the designs. Folger objected to the placement of the inscriptions and directed the Mint to adjust the design so that it would satisfy the language of the Coinage Act of 1873. Folger specifically stipulated that LIBERTY and the date appear on the obverse and that the legend UNITED STATES OF AMERICA, the motto E PLURIBUS UNUM, and the coin’s denomination appear on the reverse.

On December 20, Mint Superintendent Archibald Loudon Snowden wrote to appeal Burchard’s decision, arguing that the Treasury Secretary had misinterpreted the law and that the proposed design did not violate it. Folger made quick work of Snowden’s appeal and ordered the change. The Treasury did approve the design motif, however.

The nickel was initially released without the word CENTS inscribed on the reverse. This type has been referred to as “Type 1”, “Without Cents”, or, as in the 1908 Max Mehl publication Numismatic Monthly, “Centsless”. The Roman numeral “V”, coupled with the nickel planchet (similar in composition but slightly larger than the Shield nickel it replaced), was supposed to inform users of its value. It’s worth noting that the three-cent pieces struck in silver billon and nickel also did not include the denomination, and there was no apparent problem arising from their use. It is also debatable whether the initial design was in violation of Section 3517 of the Revised Statutes of the United States, which specify that the reverse of coins issued by the Mint must bear “designation of the value of the coin”.

A commencement ceremony was held on January 30 to mark the start of the new coinage. The first business strike was sent to President Chester Alan Arthur. Additional strikes were presented to various dignitaries. Regular coinage began on February 1.

An overblown story about unscrupulous grifters gold plating nickels and filing their rims in order to pass them as $5 gold coins caused Washington to order that the Mint adjust the design to add the word CENTS. Barber began work on a revised design in late February and the new reverse soon entered circulation. A large number of “Without Cents” nickels were hoarded by collectors and speculators while the government endeavored to withdraw them from circulation.

The 1883 Without Cents Nickel in Today’s Market

The 1883 Without Cents nickel is an affordable classic U.S. coin that should fit within the budget of every collector. In circulated condition, the coin will cost between $2.00 (for the Fine-12 example above) to about $25 for a Choice About Uncirculated example. About Uncirculated coins are coins that feature all of the design elements but exhibit traces of wear or cabinet friction.

In Uncirculated grades, the coin’s value quickly jumps to $100 for an example in MS63 and $250 for a coin in MS65. PCGS and NGC have combined to grade a few thousand examples at the Gem level. The coin becomes “investor” grade once you climb to the Superb Gem grade of MS67. Here, the availability of coins drops dramatically. At the time of this publication (9/8/2022), NGC reported only 78 grading events at this level (eight being plus grades) and none finer. PCGS, likewise, shows a low double-digit population at MS67, with 52 making the base grade and 12 earning a plus. There are outliers in the auction records, but the typical example in MS67 has sold for $1,200 to $1,400. In the plus grade, there is a disparity between auction records for coins in NGC and PCGS holders. The NGC examples typically bring about $2,400; the PCGS coins can bring $5,000 or more, depending on the coin and the venue.

The Liberty Head nickel was designed by Charles E. Barber, who is the namesake behind the Barber (officially “Liberty Head”) dime, quarter and half dollar; some hobbyists have similarly dubbed the Liberty Head nickel as the “Barber” nickel, though this has not been common practice. The 1883 Liberty Head nickel features a leftward-facing bust of Miss Liberty, whose hair is tied into a bun behind her head. She is crowned with a tiara bearing the inscription “LIBERTY.” 13 stars, representing the 13 original states of the Union, mostly encircle the bust along the obverse rim. At the bottom center of the obverse is the coin’s date, 1883. While the Liberty Head nickel may only infrequently be identified as the “Barber” nickel by hobbyists, the coins do have one widely popular nickname: the “V” nickel. The “V” refers to the large Roman numeral “V” that anchors the reverse design and indicates the coin’s denomination of five cents. The “V” sits within a wreath of cotton, corn, wheat and tobacco – all important crops representative of different parts of the country. Centered under the wreath is the inscription E PLURIBUS UNUM. No mention is made of the word “cent”. The absence of “cent” was not unusual, as the base metal three-cent nickel and the billon three-cent silver also told of their value using a Roman numeral and did not include the word.

The legend UNITED STATES OF AMERICA wraps around the top three-quarters of the reverse along the rim.

The edge of the 1883 Liberty nickel is smooth or plain, without inscription.

Charles Edward Barber was born in London in 1840. He was the son of William Barber, the fifth Chief Engraver of the United States Mint, under whom he worked as an assistant engraver. Upon his father’s death in 1879, Charles Barber became the Mint’s sixth Chief Engraver. The coins he designed during his tenure are collectively known as “Barber coinage” and include the dime, the quarter, and the half dollar. His Liberty “V” nickel is also well-known, as is his supposed feud with engraver George T. Morgan.