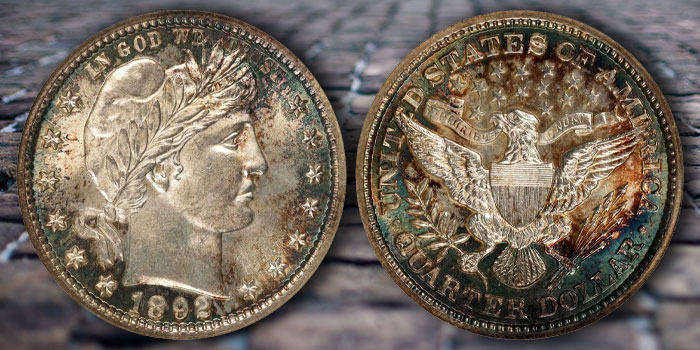 Generations of Americans living through the second half of the 19th century had known only the Seated Liberty coinage. The motif was ubiquitous, entering circulation in 1837 and adorning the half dime, dime, twenty-cent piece, quarter dollar, half dollar, and silver dollar denominations. The half dime and twenty-cent piece came and went, but Seated Liberty soldiered on.

Three years later, Congress passed the Act of September 26th, 1890, allowing the Director of the Mint, Edward O. Leech, Kimball’s successor, with the approval of the Secretary of the Treasury, to change the design of any coin after 25 years of circulation.

Leech was committed to making a change and attempted to set up a competition between 10 outside artists without even consulting the Mint’s engraving department. Leech also wanted to do it on the cheap. Rejecting the demands for financial remuneration on the part of the artists he initially approached, the director publicized a nationwide competition on April 4, 1891.

This drew considerable interest and despite collecting hundreds of designs in a public competition, the panel of judges consisting of Augustus Saint-Gaudens, Boston engraver Henry Mitchell, and the Chief Engraver of the Mint Charles E. Barber were unable to select suitable designs.

In an attempt to set the director straight, the three joined to write the following letter:

We would respectfully report that in conformity with your written request we have opened in the presence of the director of the Mint the new designs or models submitted for the silver coins of the United States, under Department circular of April 4, 1891, and have carefully examined the same.

We are of the opinion that none of the designs or models submitted are such a decided improvement upon the present designs of the silver coins of the United States as to be worthy of adoption by the government.

We would respectfully recommend that the services of one or more artists distinguished for work in designing for relief be engaged at a suitable compensation to prepare for the consideration of the Department new designs for the coins of the United States.

Stymied but not dissuaded, Leech traveled to Philadelphia to meet with the Mint’s engraving department. He asked Barber and assistants George T. Morgan and William Key to submit designs. Wanting a uniform obverse across the three circulating denominations that were up for a refresh (the dime, the quarter dollar, and the half dollar), Leech instructed the engravers to base their models on the coin designs of French engraver Eugène-André Oudiné.

He also had specific instructions regarding the reverse of the designs. For the quarter and the half dollar, the director wanted an adaptation of the Heraldic Eagle from the Great Seal of the United States. The dime, he figured, could retain the cereal wreath.

In due course, Barber’s designs were selected but tension developed between the two men as Leech insisted on a number of changes to the design in the months that followed. On October 1, 1891, Leech provided Philadelphia Mint superintendent Oliver C. Bosbyshell a list of changes that he wanted to see carried out. The next day, Barber and Bosbyshell wrote back, asking the director to refrain from making design criticisms at such a late stage in the process.

Bureaucrats love being told no and on October 5, Leech wrote back to inform both Barber and Bosbyshell that he had the authority to request changes until the designs are finalized. It was an authority he intended to use. The Philadelphia Mint relented, and over the course of the next two months, the tug-of-war continued as plasters were prepared, changes were requested, alterations were made, patterns were struck, and finally, in November, the Mint was given the go-ahead to proceed with preparations for a new coinage.

Released to mixed reviews, Barber coinage represented a new period of American coin design. And, as is often the case in the first year of a coin’s release, minor tweaks had to be made for the benefit of the Mint and its customers, merchants and banks.

As it pertained to the Barber quarter, the coin’s relief upon release impacted the ability of people to stack the coins. To adjust for this, Barber revised the reverse hub, slightly lowering the relief. An easy way to differentiate between the two designs is to look at the placement of the eagle’s wing over the letter E in UNITED. The Type I is positioned so that the middle crossbar of the E is visible. On the Type II, the middle crossbar is obscured by the wingtip.

Philadelphia, New Orleans, and San Francisco all struck both types in 1892. As the first-year issuance, the Philadelphia facility struck a total of 8,236,000 coins, the ninth-largest mintage of the series. While Type I coins are somewhat scarcer than Type IIs, they tended to be collected at a slightly higher rate due to Type I coins being released first. As a result, there is no significant price difference between the two varieties.

The 1892 Barber Quarter in Today’s Market

While 1892 Type II Barber quarters can bring fantastic sums in ultra-high grade, most collectors will be able to acquire the important first-year issue for under $200. Low circulated grades, such as G-F grades sell for as little as $10 and as much as $50, depending on the condition and the seller. In XF 40 to VF 30, grades commonly found at local coin shows, examples sell for $60 to $70. From AU 53 to XF 45, these coins sell regularly for $140 to $150. About Uncirculated examples still retain significant numismatic value and AU 55 – 58s sell for an average of $185, with some examples recorded as high as $350 and as low as $90.

Certified coins tend to bring higher prices as collectors know that they are purchasing a genuine coin that is typically problem free. A certified coin in Choice Mint State (MS63) commands a price of between $320 and $350. In Gem grades, the prices rise dramatically and at this level, there can be wide disparities on prices realized based on eye appeal and strike. Legend Rare Coin Auctions, a well-known boutique seller of high-eye-appeal certified coins got two dramatically different results for Gem Barber quarters just one year apart. In 2021, a pleasantly toned example graded PCGS MS65, sold for $616.88. A year later, another pleasantly toned (perhaps slightly more pleasantly) example graded PCGS MS65 CAC, sold for $1,057.50.

So whether you have a budget of $200 or $1,000 or more, there is a nice Barber quarter out there for you to buy. Be patient and get the best one that suits your budget.

First issued in 1892, the obverse of Charles Barber’s new quarter was dominated by an updated and elegant Liberty Head motif. Lady Liberty faces left and wears a Phrygian cap, symbolizing freedom, that is adorned with a laurel wreath. The word LIBERTY can be seen on a small band above Liberty’s forehead. The legend IN GOD WE TRUST appears above Lady Liberty and the date (1892) below. These are connected on the left by six stars and on the right by seven stars. This coin’s obverse design, which would later be called the “Barber quarter” after its designer, was also used on three of the major denominations for several decades: the half dollar, the quarter dollar, and the dime.

For the Reverse, Barber adapted the Great Seal of the United States. This includes a heraldic eagle with outstretched wings that is holding an olive branch and arrows, in its left and right talons respectively. The eagle is holding a fluttering banner that reads E PLURIBUS UNUM (“Out Of Many, One”). Above this banner are 13 stars representing the 13 original colonies. These stars were rearranged slightly for the new Type 2 examples. Surrounding the main device is the legend UNITED STATES OF AMERICA and the denomination (QUARTER DOLLAR). The eagles’ wings overlap the legend at the E’s in both UNITED and AMERICA. On the Type II coins, the eagle’s right wingtip covers almost all of the letter E in UNITED, while on the earlier hub the letter is only slightly obscured. Overall, the two types are very similar, with only slight variations in design.

The edge of the 1892 Barber quarter is reeded.

Charles Edward Barber was born in London in 1840. He was the son of William Barber, the fifth Chief Engraver of the United States Mint, under whom he worked as an assistant engraver. Upon his father’s death in 1879, Charles Barber became the Mint’s sixth chief engraver. The coins he designed during his tenure are collectively known as “Barber coinage” and include the dime, the quarter, and the half dollar. His Liberty “V” nickel is also well-known, as is his alleged feud with engraver George T. Morgan.