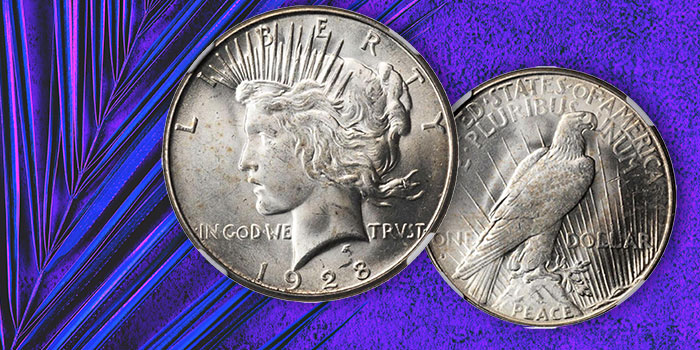 The 1928-S Peace dollar is among the most common later-date Peace dollars and one of the series’ major condition rarities. The last date struck from silver purchased under the terms of the Pittman Act, it’s more affordable than its counterpart from the Philadelphia Mint in circulated and lower uncirculated grades.

1928 marked the last year of the initial issue of Peace dollars. The Pittman Act spelled out the circumstances for the Peace dollar’s hiatus. It called for up to 350 million silver dollars to be converted into bullion and sold to Great Britain, and the melted dollars replaced using silver purchased at a fixed price of $1 per ounce. 270,232,722 dollars were ultimately melted, 11,111,168 of which were earmarked for circulating subsidiary coinage.

The Pittman Act’s silver supply was exhausted in 1928, roughly 10 years after the Act was passed. The striking of Peace dollars ended in April of that year. A July 15, 1924 memorandum from Mint Director Robert J. Grant to William M. Geldes of the Office of the Comptroller General sheds some light on the “part of the purchased silver bullion was combined with gold and other metals and must be separated therefrom before it can be coined. This separation involves mixing non-Pittman Act bullion and will not be completed for a year or more.”

“The work of recoining the silver dollars melted under the terms of the Pittman Act of April 23, 1918 was of such magnitude as to require the full capacity of the three coinage mints of the U.S. for over two years time, if the coinage of all other denominations had been discontinued. It was impossible to discontinue the manufacture of other coins.”

The Mint Director’s Report for fiscal year 1928 described the delays in the recoining process imposed by demand for circulating subsidiary coinage:

“[A]s soon as postwar demands for other coins that were in active circulation permitted, and continued whenever the mint facilities were available for the purpose until April 1928…”

The San Francisco Mint struck 1,632,000 Peace dollars in 1928, a mintage more than 4.5 times larger than Philadelphia’s. Despite their relative abundance, the 1928-S coins were weakly struck, creating one of the series’ major condition rarities.

Bags of the coins entered the market in the 1930s and 1940s, and a number of 1928-S Peace dollars were sent to Nevada casinos in 1949 and 1950, according to Q. David Bowers’ Silver Dollars & Trade Dollars of the United States: A Comprehensive Encyclopedia.

According to a June 1934 Numismatist article, collectors could still purchase 1928-S Peace dollars from the Mint for their face value plus shipping.

The 1928-S Peace Dollar in the Collector Market

Strikes are weak on 1928-S Peace dollars, especially on the reverse; Gem 1928-S examples are significantly rarer than Gem 1928 coins, despite the latter’s smaller mintage. A number of San Francisco Mint Peace dollar dates, as well as 1927-D, have small certified populations (below 100 examples recorded) in MS-65 and above.

Also, forgers sometimes file off the S mint mark in an attempt to pass the San Francisco issue as its key date Philadelphia counterpart.

MS-65 coins are highly sought-after and often realize five-figure prices. The finest-known 1928-S Peace dollars are graded MS-66; both PCGS and NGC record one example certified in that grade. Two varieties of the 1928-S Peace dollar, VAM 3 and 3a, are on the Top 50 Peace dollar VAM varieties list. Both varieties sport doubling on the motto. PCGS reports 63 VAM 3 – DDO motto coins certified.

Its rarer sibling from Philadelphia might come to mind when thinking of the keys of the series, but 1928-S Peace dollars present specialists with a tough condition rarity and two notable VAM varieties. For those willing to compromise on quality, the 1928-S Peace dollar is an affordable later issue.

The obverse is dominated by a leftward-facing bust of a young Miss Liberty wearing a tiara of rays that unmistakably resembles the radiant crown upon the head of the Statue of Liberty. Most of Miss Liberty’s hair is contained within a bun at the back of her head, though several locks are seen hanging alongside her neck.

Arcing along the rim on the upper half of the obverse field is the inscription LIBERTY, and centered below the bust of Liberty near the bottom rim is the date 1928. The motto IN GOD WE TRUST appears in a single line of text across the lower quarter of the obverse and spreads across that section of the field, with the words IN GOD WE appearing to the left of Miss Liberty and the word TRUST located behind her neck. Incidentally, the letter “U” in “TRUST” appears as a “V,” which de Francisci employed to represent a “V” for “Victory”. Dots appear between the words IN GOD WE and are also seen on the rim side of the words IN and TRUST. The designer’s monogram, AF, appears below Liberty’s neck in the lower obverse field. The bold rays in the image of the rising sun harmonize with the rays seen in Miss Liberty’s tiara on the coin’s obverse. The legend UNITED STATES oF AMERICA appears along the rim in the top half of the reverse. The motto E PLURIBUS UNUM is located directly below in lettering identical in size to the legend. The eagle’s beak breaks the bottom of the “S” in PLURIBUS and visually divides that word from UNUM; meanwhile, a dot punctuates the space between E and PLURIBUS.

The denomination ONE DOLLAR appears across the bottom third of the reverse in a single line of text, with the word ONE inscribed to the left of the eagle by its tail feathers and DOLLAR superimposed over the sun’s rays to the right of the eagle. PEACE is inscribed along the rim below the eagle, atop the rock on which the patriotic bird stands. The mint mark “S” is located beneath the word ONE near the tips of the eagle’s wings.

Anthony de Francisci was born in Palermo, Sicily in 1887 and emigrated to the United States in 1905. He began his career as a sculptor studying under such notable numismatic artists as James Earle Fraser, Hermon Atkins MacNeil, and Adolph Weinman. The Peace dollar (1921-35) is his most famous creation but he also produced several medals. He died in 1964.