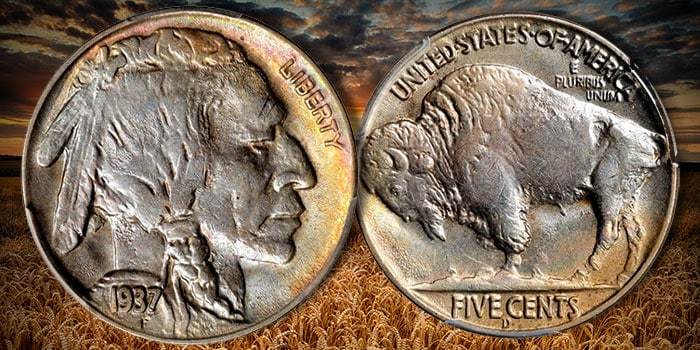 The famous 1937-D “3 Legged” Buffalo nickel is one of the most important modern US coins and probably the most well-known type in the Buffalo or Indian Head nickel series. Ironically, however, the “3 Legged” Buffalo variety of 1937-D is not a true variety since the missing leg was actually included on the new die. Instead, the coin is an example of something called an Abraded Die Reverse.

It is commonly assumed that this type was created by an overworked employee at the United States Mint, who, as coin dealer A.D. Craig claimed in 1963, had aggressively over-polished both the upper and lower die. Later, Walter Breen fleshed this theory out by stating that one Mr. Young, the press operator, actually used a polishing rod to remove a series of clash marks instead of replacing the dies.

Alternatively, the polishing could simply have been undertaken to extend the life of a rusted and worn-out die pair, as evidenced by the deep rust pitting on both the obverse and reverse. This polishing removed almost all of the Buffalo’s front right foreleg, leaving just the hoof and creating a pock-marked look on the rear leg. Normally, dies are removed from use once they started showing such wear. However, the Denver Mint was being pressured to increase production, and Buffalo nickel dies were used longer than normal.

This pseudo-type was first put into circulation by the standard Treasury Department shipments to banks, which is how Montana-based coin dealer C.L. “Cowboy” Franzen found the first examples in late 1937. Shortly thereafter, Franzen marketed these coins in The Numismatic Scrapbook. By 1965, dealer Ken Nichols of Laguna Hills, California was selling examples in conditions ranging from Fine to About Uncirculated for $40 to $95 USD each ($377 to $895 adjusted for inflation).

Because other Mint workers discovered this production issue, and all of the examples were struck with a single worn reverse die, it is estimated that upwards of only 20,000 pieces were created.

While this coin is scarce in circulated condition, some 8,000 examples have been graded and certified as XF 45 and lower. But the popularity of this type ensures that demand remains high despite a large number of available examples. This ensures a high price, even for lower-quality pieces. For example, in G 4 to G 6, you should expect to spend between $200 to $500.

In Mint State, population numbers drop off slightly. Demand skyrockets, however, and by MS 64, examples are regularly selling for $5,000 to $9,000. With two examples graded by NGC and none by PCGS, the absolute pinnacle (grade-wise) for this type is MS 67. One of these examples, sold by Heritage Auctions for $85,000 in 2016, is fully lustrous and simply dripping with eye appeal. The coin also shows exceptional detail accentuated by gold and lilac toning. Interestingly, in a more recent 2021 Legend Rare Coin Auctions sale, this same coin earned the auction record of just under $100,000 – despite being re-graded by PCGS as MS 66+!

The obverse of the 1937 Buffalo or Indian Head nickel features an oversized bust of a Native American warrior. Unlike the later Sacagawea dollars, this design was not based on a single model or historical figure. Instead, sculptor James Earle Fraser created a composite image of three well-known men: Chief Iron Tail of the Sioux, Big Tree of the Kiowa, and Two Moons of the Cheyenne. This composite man wears two feathers woven into his hair and a braid running down the side of his head. On the 1937-D “3 Legged” type, there is significant die rust on the nape of the bust’s neck. The date (1937) is superimposed over the truncation of the bust, and the legend LIBERTY is off to the side at 2 o’clock on the rim.

The reverse was, however, based on a real buffalo named Black Diamond. This buffalo lived at the New York Central Park Zoological Garden. While standard types display all four legs, on this type the foreleg of the buffalo is missing. Additionally, the rear right leg is slightly weak. There can also be an arcing line of raised metal due to die rust in between the animal’s fore and rear legs. This gives rise to the coin’s unofficial name: “Urinating Buffalo”. The buffalo is standing on a small strip of land, below which is the denomination (FIVE CENTS) and mint mark (D). Arcing above the animal’s back around the rim is the legend UNITED STATES OF AMERICA. The motto E PLURIBUS UNUM is squeezed between “AMERICA” and the animal’s back.

Intriguingly, this design does not include the national motto IN GOD WE TRUST. Mint Director George Roberts informed Fraser that “the motto, ‘In God We Trust’, is not required upon this coin” (Burdette, 2007).

An American sculptor, James Earle Fraser was active during the first half of the 20th century. Born in Minnesota, Fraser attended the Art Institute of Chicago and displayed some of his earliest artwork at the 1893 World’s Columbian and 1915 Panama Pacific Expositions, including his piece entitled End of the Trail. A large portion of his work centered around Native American themes and are embodied in his 1913 Indian Head nickel design.