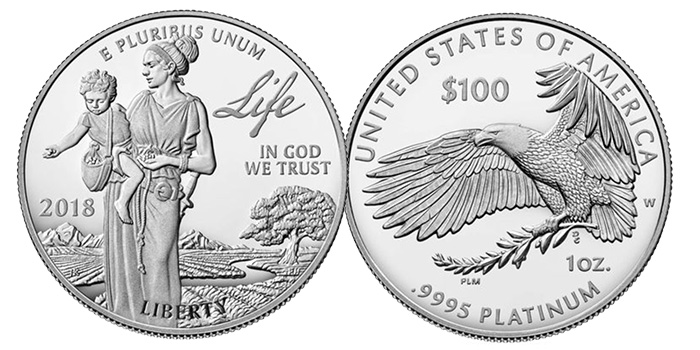 “We hold these truths to be self-evident, that all men are created equal, that they are endowed by their Creator with certain unalienable Rights, that among these are Life, Liberty and the pursuit of Happiness.”

–From the Preamble to the United States Declaration of Independence

Starting in 2018 and running through 2020, the United States Mint will issue a three-year set of Proof American Platinum Eagles honoring the ideals of the Declaration of Independence. The design of the first coin, the 2018 entry, is emblematic of “Life”, while 2019 and 2020 will be emblematic of “Liberty” and the “Pursuit of Happiness”, respectively.

Since its debut in 1997, the proof version of the Platinum Eagle bullion coin has featured a different reverse each year; 2018 sees both sides changed from the previous year. Several themed sets have been issued throughout the program’s run, with the Preamble to the Declaration of Independence being the current theme.

The U.S. Declaration of Independence was, of course, signed on July 4, 1776. It signified the intent of the American colonies to govern themselves independently from Great Britain.

The obverse features Lady Liberty holding a small barefoot child in a tunic on her right hip. The child is spreading seeds on the ground from a pouch hanging on its right side. Liberty, carefully watching the child, also holds a handful of seed in her left hand. A sword rests in a sheath hanging from a belt on Liberty’s left side. She wears a classical Greek peplos and a headband holds back her long hair, which is curled up in a bun near the top of the coin.

A large expanse of plowed field extends behind the pair. A range of tall, jagged mountains hem in the scene in the far background, while a tree with a large amount of foliage stands in the mid-ground. A river or stream winds through the field, coming close to both the tree and Lady Liberty.

The legend E PLURIBUS UNUM in a serif font is at the very top of the side. Beneath that legend on the right side is the word LIFE in a calligraphic cursive font, similar to how the word may have been written with a quill in the original Declaration of Independence. Immediately under the word LIFE is the motto IN GOD WE TRUST. On Liberty’s right side and under the child is the date 2018. At the very bottom of the coin running counterclockwise is the inscription LIBERTY.

Artistic Infusion Program (AIP) designer Justin Kunz created this design, as well as the next two obverse designs in the 2018-20 Preamble set; his initials “JK” are in the field below the date. U.S. Mint sculptor-engraver Phebe Hemphill engraved the obverse and adapted it for coining. Her initials “PH” are in the field under the tree.

AIP designer Patricia Lucas-Morris created the eagle that serves as the central motif on the reverse; her initials “PLM” are found near the tip of the olive branch it holds in its talons. The eagle is clearly rendered mid-flight, the wings drawn back but not yet at the top of their stroke. Much attention is paid to detail among its feathers, with different designs and textures for the eagle’s head, body and wings. The inscription UNITED STATES OF AMERICA arcs clockwise along the top rim. Between the inscription and the eagle is the denomination $100. The legally required weight and purity (.9995 PLATINUM and 1 OZ.) are located at the bottom. To the right of “1 OZ.” is the mint mark “W”, indicating that the coin was struck at the West Point branch mint.

Recently retired Mint sculptor-engraver Don Everhart engraved the design; his monogram “DE” is located at the base of the olive branch, beneath the eagle’s claws and above “1 OZ.”.

The edge of the 2018 Preamble to the Declaration of Independence Platinum Proof Coin is reeded.

Designer Justin Kunz is a participant in the United States Mint Artistic Infusion Program (AIP), and has made several contributions to the Mint’s recent selection of commemorative and collector coins. He has also done design work for the game World of Warcraft.

Sculptor-engraver Phebe Hemphill joined the U.S. Mint in 2006, and since that time has become one of the nation’s most prolific coin designers (View Designer’s Profile).

Artist Patricia Lucas-Morris is also a designer for the United States Mint as part of the AIP.

Don Everhart joined the United States Mint sculpting and engraving department in 2004, after a long and successful career as a sculptor and designer of medals. He retired in 2017. (View Designer’s Profile).