Sesquicentennial Exposition of 1926 – When you think of ways to honor your country, what do you think of? For nations around the world, from the far reaches of history to today, one answer has been beautiful commemorative coins. In ancient times, commemorative coins were even used to spread news throughout a country. The coin we write you about today may not spread news, but it does spread the joyful message of America’s continued success and the liberty we cherish.

In 1920, Philadelphia Mayor J. Hampton Moore and a group of prominent citizens launched a campaign whose most enduring legacy may be the coin we’ll describe in just a moment. This group succeeded in bringing to Philadelphia a world’s fair to celebrate the 150th anniversary (sesquicentennial) of the signing of our Declaration of Independence. Any world’s fair is an epic event. The Sesquicentennial Exposition featured an 80-foot replica of the Liberty Bell covered in 26,000 light bulbs at the entrance to the fair. The Sesqui-Centennial Stadium was built for the fair, as was a bridge across the Delaware river to connect central Philadelphia and Camden, New Jersey. Not to be outdone, the Austin Organ Company built for the fair what is still one of the largest pipe organs in the world. In the amusement area, named Treasure Island, were five acres of entertainment for kids: a replica of the Canadian Rockies, a pirate’s lair, and thrilling roller coasters.

Most Impressive of All

But the fair’s greatest treasure of all—outlasting even the stadium—was its Sesquicentennial Exposition commemorative coins. In 1925, Congress passed an act authorizing the creation of commemorative coins for the fair. Fittingly, the Philadelphia Mint took on the job and minted quarter and double eagles.

Here some controversy enters the picture. The designs that Chief Engraver John Sinnock produced were less than exciting. So, the commission in charge of the fair engaged John Frederick Lewis, president of the Pennsylvania Academy of Fine Arts, to create sketches. Sinnock then adapted Lewis’ sketches, but failed to give him any credit. 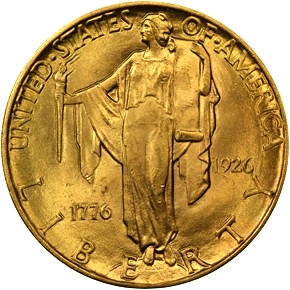 The quarter eagle’s design was superb. The obverse takes an Art Deco approach, with a slimmer Lady Liberty than the classical maidens and matrons depicted on older U.S. coins. In context, the liberty cap she wears looks quite 1920s. Some people say she looks like a flapper girl. Take a look here—what do you think?

Liberty stands on a partial globe, her right arm outstretched and holding the torch of freedom (in a likely nod to the Statue of Liberty). In her left hand, she holds a long scroll representing the Declaration of Independence. Even in Liberty’s flowing robes, the design manages to achieve a pleasing, Art Deco-like geometry and symmetry. The whole effect is one of grace, beauty, and pleasing simplicity. The reverse shows Independence Hall, where the Declaration was signed, with a subtle rising sun behind it. Sinnock’s initials are to the right, above the right wing of the building. Art historian Cornelius Vermeule greatly admired the reverse, writing that “The bell and its inscriptions are jewels of precision.”

Only 46,019 are known to have been minted, and the most common grades today are MS64, then MS63, and then MS65. Due to the coin’s low relief, gem specimens are hard to find.

An eBay search will show you low-quality Sesquicentennial Exposition quarter eagles, full of blemishes and tarnishes, but this specimen—82 years after it was struck—shines lustrous, its features clear.

To hold it in your hand is to see the work of American patriots who gave countless hours to commemorate a milestone anniversary in our nation’s history. This coin is ideal for collectors looking for a complete commemorative coin set, as well as any collectors who want a gem-quality remembrance of our nation’s past and its enduring ideals. Legendary illusionist and escape artist Harry Houdini performs his magnum opus, spending 91 minutes underwater in a sealed tank before escaping. Encasing himself in an airtight iron coffin, Houdini is lowered into the swimming pool of the Shelton Hotel in New York. The coffin is equipped with a button, which allows Houdini to communicate with his assistants. At 91 minutes, a pale Houdini emerges, attributing his successful tenure in the coffin to controlled breathing techniques. (The coffin probably contained enough air for no more than five minutes of normal breathing.) Unfortunately, it is his last feat. Houdini dies a couple of months later, on Halloween. In the 1920s, Miami was the fastest-growing city in the country—until disaster strikes. Described by the U.S. Weather Bureau in Miami as “probably the most destructive hurricane ever to strike the United States,” the Great Miami Hurricane of 1926 devastates the Greater Miami area and causes extensive damage along the U.S. Gulf Coast and the Bahamas. The $78.58 million damage toll, which translates to nearly $165 billion in today’s dollars, remains one of the costliest in U.S. history. Between 325 and 650 people die, and more than 800 others are never accounted for. October – Winnie-the-Pooh Is First Published as a Book

Now one of the most well-known characters in all of children’s literature, Pooh started with a simple tale as old as time: a parent’s love for their child. A.A. Milne named Pooh after his son’s teddy bear, and based the character Christopher Robin on his son. Piglet, Eeyore, Kanga, and others were inspired by his son’s toys as well. Combined with E.H. Shepard’s illustrations, the book becomes a wild success. 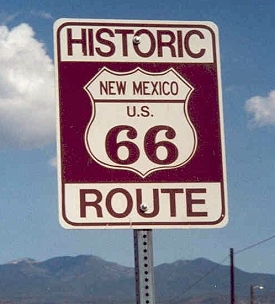 Before Route 66, most small towns in America had no access to a major national route, and the roads in isolated western states couldn’t easily accommodate new residents and travelers. In 1925, the federal government executed its plan for construction of national highways, and in November 1926, the legendary Route 66 is established.