By BJ Searls for PCGS ……

Over the last several years, PCGS has been grading more and more tokens and medals and interest in these items is increasing. And one of the relatively recent additions to the PCGS Set Registry® is the National Commemorative Medals of the United States Mint (1940-Present) set. This 182-item set is filled with medals that cover a wide range of subjects. Like the U.S. commemoratives that were minted by the United States Mint from 1892 to 1954 and 1982 to date, these medals were also produced by our Mint to celebrate special events, people and places. However, unlike our commemorative coinage, which was issued for circulation, these medals were not released for general circulation.

For the most part, national commemorative medals filled a gap from 1954 through 1982, when regularly issued commemoratives were not produced.

The first medal listed in the Dean catalogue is the Greenwich, Connecticut Tercentennial. This medal, struck in bronze, celebrates the town’s 300th anniversary. In 1640, Daniel Patrick and Robert Feake were colonists who purchased the land from native American Indians. “AUTHORIZED BY THE CONGRESS OF THE UNITED STATES OF AMERICA MAY 13 1940” is engraved on the reverse of the medal.

The last medal in the catalogue is the September 11 National Medal to honor the men and women who lost their lives in America’s worst terrorist attack. The medal was struck in silver at both the Philadelphia and the West Point Mints. There are a number of medals struck in silver, gold and platinum that are unique and in many cases, unobtainable. These coins are not required in the Registry set. Many of these unique specimens were given as gifts to people associated with the commemorative event or honoree.

Within the complete set are three series which have proved to be very popular. The American Revolution Bicentennial medals were struck between 1972 and 1976 to honor some of our nation’s first revolutionary heroes: George Washington, Patrick Henry and Samuel Adams, John Adams, Paul Revere, and Thomas Jefferson. 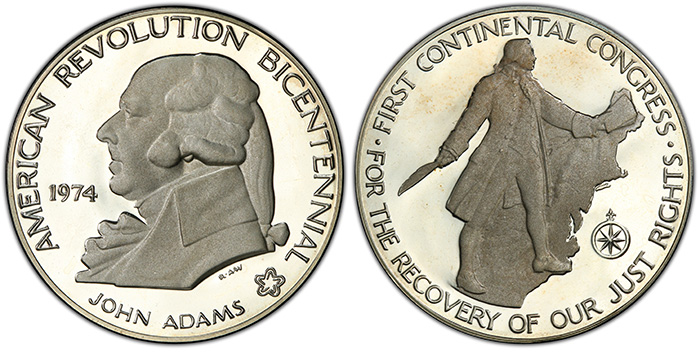 The Young Astronaut program is a very collectible themed series. Three designs were struck in 1988 in silver, gold and bronze. The first design features the space shuttle in flight. The second design is that of an astronaut on the moon with the American flag. The last design is the space shuttle superimposed over the Stars and Stripes A wonderfully designed series is that of the National Wildlife Refuge System. Celebrating a century of conservation 1903-2003, all four medals feature Theodore Roosevelt on the obverse. The four different reverses are the bald eagle, canvasback duck, elk, and salmon. 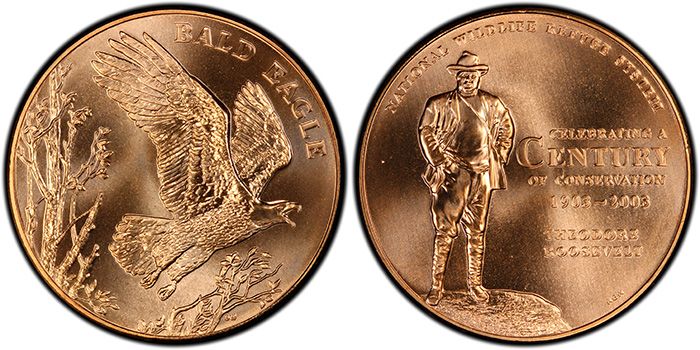 A good place to start working on the complete set is to focus on each of the three series because completion of the 182-item National Commemorative Medal set will be challenging and may take some time. Some of the issues required in the set have very low mintages, as low as just two or three. Those coins can be quite costly, running thousands of dollars. With a wide range of dates, metal content, and designs celebrating many wonderful events, places and people in America, building a set is sure to be of interest to many collectors.