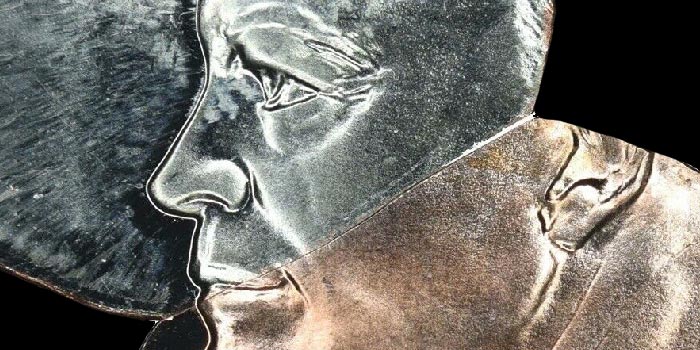 This amazing unique discovery is the only known off-metal mated pair on any U.S. Proof coinage that combines two different off-metals. This mated pair is unique in several ways and is visually breathtaking.

A clad dime planchet and a copper cent planchet were both in the collar at the same time and were struck by both the obverse and reverse Ike Dollar Proof dies. The placement of Eisenhower’s head on the obverse and the eagle on the reverse is perfectly positioned. Even in mint state, a single Ike Dollar off-metal struck on a cent or dime planchet sells for $10,000 USD each. In Proof, of which there are only two or three known, they would each sell in the $15,000 to $20,000 range. Previously in the January 2008 FUN Heritage auction, a different mated pair of Proof Ike Dollars sold for $40,250 (lot #3523). It included a proof Ike Dollar indented by a foreign planchet that was mated to that copper planchet.

As spectacular as the Heritage mated pair is, it does not compare to the unique mated pair offered here, which includes two different off-metals that are mated.

Proof coins are struck by technicians who hand feed the blanks into special presses. They are produced, examined, and packaged using extreme quality control. It is very unusual to find major Proof errors. A few broadstrikes, off-centers, double strikes (in collar), and off-metals have been known to be found in sealed proof sets. Proof errors are aggressively sought after by many error collectors.