The denomination of a mule is determined by the planchet used for that coin. And of those mules that exist, most were created from coins whose planchets happen to be very close in size to each other, such as the Lincoln cent and the Roosevelt dime, or the Washington quarter and $1 coins like the Presidential and Sacagawea/Native American golden dollars. 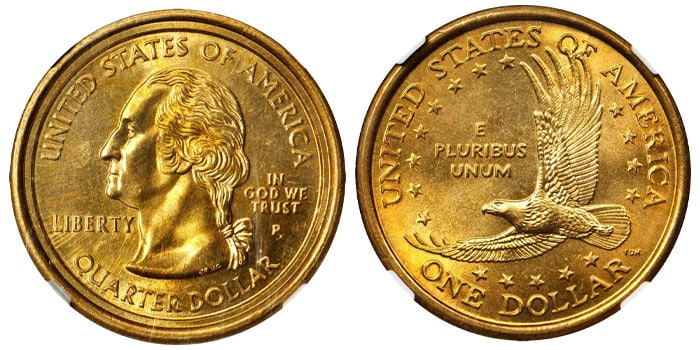 Moreover, mules of modern circulating coins are so rare that they did not even exist, or at least had not been discovered, until the year 2000.

In May of that year, collector Frank Wallis of Arkansas made numismatic history with the first discovery of a 2000-P Sacagawea dollar in a roll of those coins that was paired with the obverse of a Statehood quarter with the reverse being the flying eagle design of the Sacagawea coins.

Today there are 19 confirmed examples of this amazing mule error coin that is known as the king of U.S. Mint errors and was ranked the #1 U.S. error coin of all time in the popular book 100 Greatest U.S. Error Coins.

Since then, we have learned that this error was struck from three different die pairs that are discernable based on some die cracks or die gouges on those coins. The United States Mint confirmed the coin’s existence the following month and has also indicated more recently that as many as 350,000 of these mules were produced on three adjoining coin presses, which is why there are three die pairs.

The coins were also all produced at the Philadelphia Mint, which is where subsequent examples were discovered, and their delivery was traced to a particular armored carrier company in the same city. Most examples were destroyed apart from the 19 examples discovered to date, of which six have been graded by PCGS and 11 by NGC. There could be others in theory, but it seems likely they would have been found by now unless they are sitting in sealed rolls or bags.

The second example of this coin discovered was actually the first one sold, which happened on eBay on July 7, 2000, for $41,395 USD. This was a time when eBay was still establishing itself as a platform for buying and selling coins. The sale of this coin received so much attention that it is believed to have played a key role in cementing eBay’s role in this area.

On January 14, 2021, NGC certified the first discovery of a mule that combines the obverse of a Sacagawea dollar with the reverse of a $1 Presidential coin struck in 2000 at the Denver Mint that received a grade of AU58. Both types of golden dollars were being produced at Denver that year, and the mule was discovered in a mixed bag of dollar coins obtained from a bank in 2019.

The day after NGC made this announcement, the U.S. Mint said that it had been aware of the coin since 2014, and they had implemented multiple new controls and mistake-proofing procedures to prevent a similar item from being made in the future. They did not disclose how it was made, however, nor how many they believed had been produced, nor what controls and procedures they had put in place. It is also not known if the obverse had been intended to be paired with the normal reverse of the Sacagawea dollar, or if the reverse had been meant for one of the Presidential dollars that were being made that year.

When the latter coins were first made, hundreds of thousands of errors were made that involved the edge of the coins, where the date, mint marks, and, for a time, the motto “In God We Trust” appeared. The Mint would later change its coinage presses so that the coins would have their correct edge inscriptions imparted during the production process instead of being done afterward in a separate location.

Another recent mule discovery paired a 2001-D Lincoln cent obverse with the reverse of a Roosevelt dime. That specimen, which graded MS65 Red PCGS and is the second known example of this particular mule, sold on February 22, 2022, for $78.000.

If you think you have discovered a mule, it is important to have it evaluated by at least a knowledgeable dealer and then by either PCGS or NGC since there have been cases of counterfeit mules, which are typically created by cutting two coins in half or grinding them down and then gluing the two sides together.