When a coin is struck, it should be produced from dies that are clean and free of any residues, debris, or other random objects so that when the dies come together to strike the planchet, a perfect strike is the result.

If, however, there is something between the dies or on the dies or planchet, the result will be a “struck-through” error, resulting in part or even all of the design missing on the coin.

Struck-through errors are the most common mint error type, and it is a very broad category comprising many variations. It is also one of the most dramatic mint error types, with the error often being obvious to the unaided eye. There are two basic categories of struck-through errors. The first is just called a “strike through” and the second type is called “struck-through and retained”. Both types are related, since all struck through “something” – the difference being whether that “something” was retained on the coin or fell away after strike. 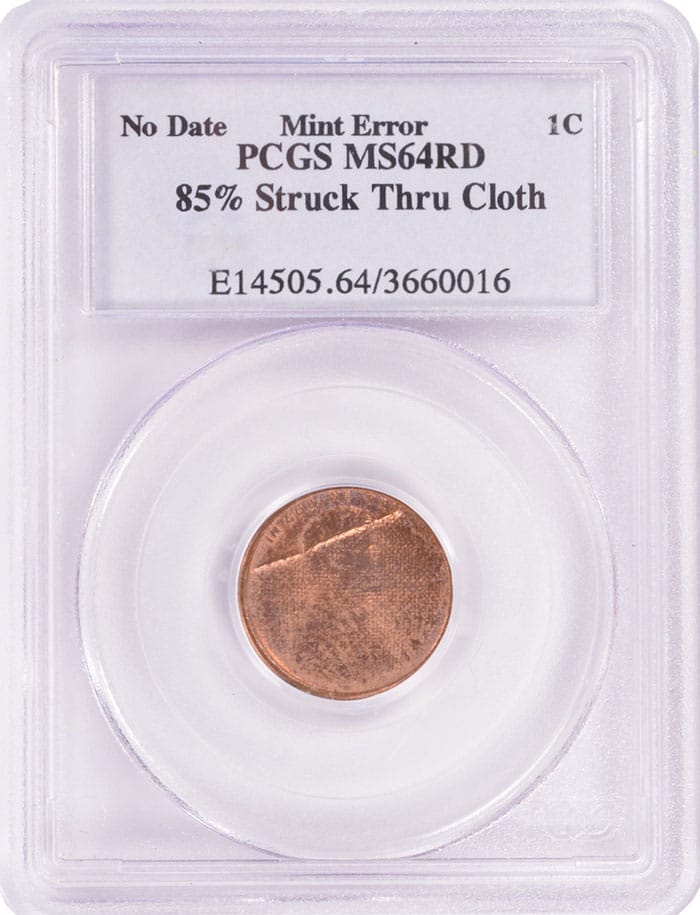 A strike through is simply a coin that was struck through something, but the object it was struck through is no longer present on the coin. Such a coin may have a shape, design, or other identifying characteristic in the struck-through area of the coin, but the object or substance itself will not be “retained” on the coin. This is the most common of the two struck-through types. The reason it is the most common is that most strike-through errors result in objects the coin is struck through falling away and getting separated from the error after being struck, or because the object may stay stuck to the die and keep striking coins until it is worn down and effectively “destroyed”. Another reason it is more common is because of the way strike-through errors are made, which we will discuss shortly.

The second category of struck-through errors is called “struck-through and retained”. These are coins that are struck through something and have the item partially or fully retained on the coin’s surfaces. Some examples of things found “retained” include pieces of plastic tape, staples, copper wire, plastic, grease, pieces of random metal, steel washers, string, as well as many other things too numerous to list here. Retained struck-through errors are probably around 100 times rarer than non-retained. They are also the most popular, as they can be wild in appearance and have tremendous eye appeal. A coin with a steel washer struck into it will get any collector’s attention! If, for example, a piece of tape got stuck to the obverse die and proceed to be struck into the proceeding 19 coins (which will simply be struck-through coins and perhaps have a pattern of the piece of tape on them, but no tape itself), and then on the 20th strike, the tape comes off the die when the strike occurs and gets “stuck” to that coin, the 20th coin would be a “retained strike through”. In such a scenario, there would be 19 “struck throughs” and one retained struck through. This is one of the main reasons why the object is so rarely retained on the coin.

Another difficulty usually precluding the release by the Mint of struck-through and retained errors is that the coin with the retained object then has to make it out of the Mint without the object falling away from the coin. It will likely jostle about in a bag of coins or rattle against pieces of Mint equipment like the counting machine — all things that can potentially break the retained object loose. The most basic and fundamental rule would be that the more unusual, large, and dramatic the strike through (whether the coin is of the retained categorization or not), the more valuable it is.

Nevertheless, some strike throughs can actually hurt a coin’s value. A strike through on an 1893-S Morgan dollar or a 1909-S VDB Lincoln cent would be far more likely to lower the coins’ value than it would be to increase it. This is because the coin is inherently rare, and a strike through is more of a distraction to the likely buyers; an error collector wouldn’t want to spend that much for the error type, and the non-error collector of that series would want a “perfectly minted” coin with as few imperfections as possible.

Struck-through errors can be collected by type, such as collecting coins struck through retained staples, plastic, or string. Another method of collecting is to just collect any and all retained struck throughs as can be acquired. Some collectors opt for collecting a strike through for each date and mintmark of a certain series, such as Lincoln cents or American Silver Eagles, for example. Because strike throughs are the most common error (as a mint-error type), they also are available for collectors both on a small budget as well as collectors with large budgets.

Retained strike-through errors typically start around $100 but can quickly go up into the hundreds or sometimes even thousands of dollars, depending on how dramatic they are and the retained object they are struck through.

Struck-through errors have a lot going for them, appealing to all budget levels, and comprising some of the most dramatic-looking mint errors you will ever see. They are also available in virtually every coin series known and can make either a nice error set or simply be a novel addition to a non-error coin collection.