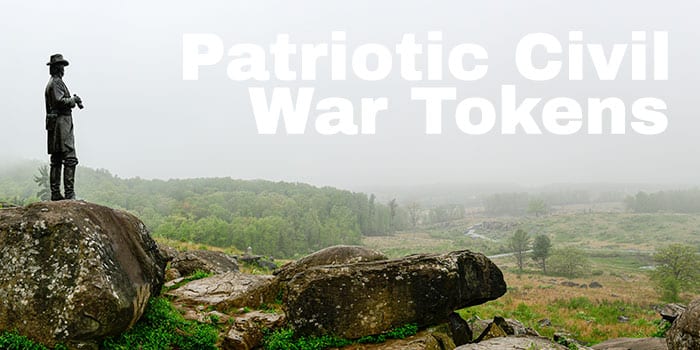 One common social impact of warfare is the general breakdown of confidence in a nation’s economic system. While seen during international conflicts such as in Germany during both World Wars and the Balkans during the fall of Yugoslavia, this erosion of confidence is particularly relevant for civil wars.

While the governments of both the North and the South began reorganizing their economies as soon as it became evident that the American Civil War would drag on for a significant period, the reorganization was not enough and citizens still “hoard[ed] metallic coins.” The problem of hoarding became so large that the vast majority of gold “was withdrawn from general circulation,” and “large quantities [of one and two cent pieces were] hoarded and thus kept from circulation.” This trend continued until there were virtually no metallic coins in circulation in either the Union or the Confederacy.

There are two main categories of Civil War tokens: Patriotic tokens and store cards. Patriotic Civil War tokens displayed political messages as a tool to promote the Union while simultaneously acting as a profit-making venture, and the store card types were used as company pseudo-scrip and small canvases for corporate advertisements. In this article, I will focus on the former.

The production of Patriotic Civil War tokens was mainly centered in New York City (52.5%), with other centers of production in Waterbury, Connecticut (16.3%); Cincinnati, Ohio (11.5%); and Philadelphia, Pennsylvania (9.3%). All of which were important Union cities with large economies during the war. Most of the tokens were copper and of a similar “diameter and thickness” to a standard small cent. Since contemporary counterfeiting laws were “pretty vague about copper coinage,” some of the individuals who struck these pieces tended to blend the line between their tokens and authentic coins. Some of their designs were so similar that it was very difficult to tell them apart.

On their obverses, Patriotic Civil War tokens followed one of four main conventions. The first category “depict[s] major US personalities” on the obverse. The reverse imagery of this type is highly varied, with examples including devices such as the legends ONE COUNTRY or OUR NAVY/ARMY, patriotic shields, or even the common NOT ONE CENT within a wreath. Examples of these types can be seen below. The second category of Patriotic Civil War tokens depicts well-known symbols of the Union. Examples from this category are easily recognizable as political propaganda and highlight the Union as a strong, legitimate, and stable entity modeled off of major contemporary European kingdoms all the while being “festooned with patriotic sentiment.” 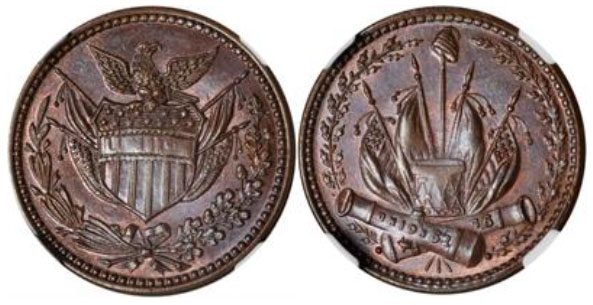 The types comprising the third category depict military hardware on one or both sides. Perhaps one of the most well-known types of Civil War token, which depicts the ironclad USS Monitor, falls into this group. From cannons to ironclads, these types of tokens display the Union’s military and industrial might. Lastly, the fourth category is those tokens that are “non-pictorial.” These tokens usually have short phrases that demonstrate loyalty to the unionist cause.

Collectively, the Patriotic Civil War tokens are interesting because they all “show the opinions of many noncombatant Americans during the Civil War.” Unlike store card tokens, these types were generally sold directly to numismatists with the intention that they would be collected and not spent. With “attractive and meaningful” designs, they serve as a snapshot of time.

That being said, Civil War tokens were not struck with any serious sense of quality control. Errors are quite common, and they actually serve as a very interesting focus for collecting.

One of the errors most commonly found on these tokens is die cracking and deterioration. In fact, with the example below a collector can find examples that track the disintegration of a specific die set until it is almost completely shattered. Additionally, this token is an interesting bridge between the store card and Patriotic categories since it was struck by a company (Broas Pie Bakers of New York City), but it does not have a denomination and is full of patriotic imagery and language instead of simply a tool for corporate advertising. 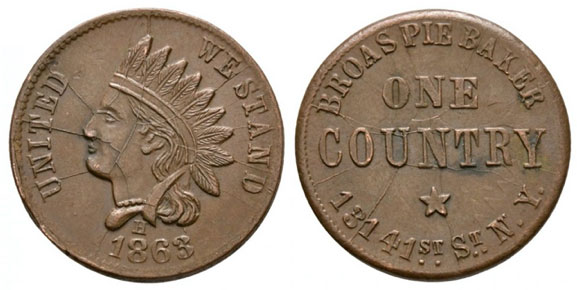 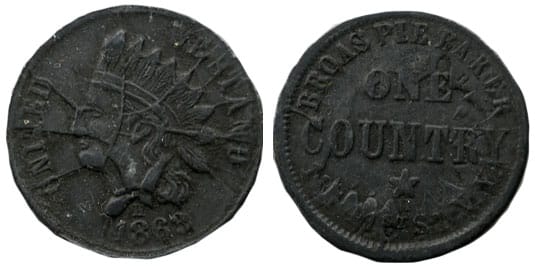 Other errors that can be found without too much trouble on Civil War tokens are cuds and die clashes. Most of these errors and poor strikes are due to a lack of government oversight. While the US government had adopted the practice of “letting out by contract parts of the process of coining money” to private companies, these tokens were not part of this practice. In fact, in 1862, the New York state legislature passed “a law prohibiting the issue of tokens.” This law was a failure as evidence of the continued, and even increased, production of tokens in New York City over the duration of the war. In response to this failure, the national government passed a law on July 17, 1862, that authorized the “distribution of postage stamps” as a replacement for the ubiquitous tokens. Additionally, the law explicitly “prohibited the issue of tokens and imposed as a penalty a fine of not exceeding $500, or imprisonment for not over six months, or both.” The public backlash against these encapsulated stamps was rapid. The move to this pseudo-currency was described as a “miserable shift” in a contemporary report by the Secretary of the Treasury from 1862. As a result, these interesting numismatic and philatelic items quickly fell from favor and disappeared from circulation. The government did in fact prosecute several parties issuing tokens, which had a chilling effect on further production. Nevertheless, the law did not stop the use of tokens… but the large-scale issuance of official fractional currency by the government did.

Civil War tokens are in general quite common, and most Civil War tokens are not rare in any sense of the word. These types can be purchased from most dealers for between $20 and $50, depending on their condition. Less common types, which also contain more interesting imagery, are generally worth between $50 and $100. Only the rarest types in the best condition are worth more than $100 and can sell for thousands when they come to auction.