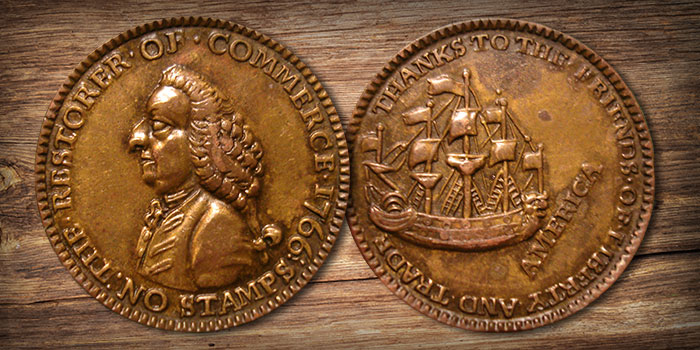 A Newman Numismatic Portal user from the United Kingdom recently reported the discovery of a high-grade Pitt farthing, which researcher Chris McDowell ranks as the fourth finest known. Listed among colonial issues in the Guide Book of United Stats Coins (the Red Book), the Pitt tokens commemorate William Pitt’s efforts to repeal the 1765 Stamp Tax. The obverse legends read THE RESTORER OF COMMERCE 1766 / NO STAMPS and AMERICA, while on the reverse THANKS TO THE FRIENDS OF LIBERTY AND TRADE encircles the border.

Little is known of their origin, which was more likely in Europe than America.

This piece was discovered by a UK dealer, Martin Kent, who operates a coin store in Lincolnshire. Kent located McDowell’s Pitt farthing census, published on Newman Portal, and in turn, was connected by Len Augsburger, Newman Portal Project Coordinator, to McDowell.

McDowell tells the story of the discovery in his updated census:

“Mr. Kent owns a small coin shop in Alford Lincolnshire, England. His store was closed because of COVID-19 for many months, and he reports that the first week his business was back open in April 2021, a ‘young chap’ brought this spectacular specimen into the store along with a grouping of modern British coins left to him by his grandfather. The hair detail is only matched or surpassed by the three Pitt farthings ahead of it on this census. All ten portholes are visible and it is well-struck with hard surfaces. There is an area above the foremast of the ship on the reverse that needs closer examination as it could be post-strike damage, but it is just as likely to have been present on the flan pre-strike as it has an appearance not unlike that seen on many other Pitt farthings. This specimen could not be observed in hand because of Covid-19 and other restrictions; however, based on the weight, diameter, and known details that have only been observed on authentic specimens, this Pitt farthing is authentic. It is a stunning addition to this census. The fact that it was discovered in England like so many other Pitt farthings, may put the final nail in the coffin of the belief that they were originally produced in America.”