By David Provost for CoinWeek …..
Editor’s Note: David Provost wrote the excellent Commemorative Stories series for CoinWeek. The following piece on the Mecklenburg Declaration of Independence Centennial Medal originally appeared in the North Carolina Numismatic Association Journal as part of David’s series titled Exploring North Carolina Exonumia. This series earned David an NLG Award for “Best Column in the Non-Profit or Club Numismatic Publications” category. It is republished here with his permission.

The Mecklenburg Declaration of Independence is a controversial part of North Carolina’s history.

In brief, some historians believe that representatives of Mecklenburg County met on May 19 and 20 in 1775 to discuss, debate, and decide what steps would be taken by the county in response to the increasing oppression they were being subject to by King George III, the British Parliament, and local Crown authorities. Further, it is said that the assembled representatives developed a series of resolutions that declared Mecklenburg County’s independence from Great Britain; the document is said to have been read to an assembled public on May 20, 1775 from the steps of the Charlotte Courthouse. If this is all true, then it would be very significant considering it occurred more than a year before the national Declaration of Independence was approved by the Continental Congress in Philadelphia on July 4, 1776. 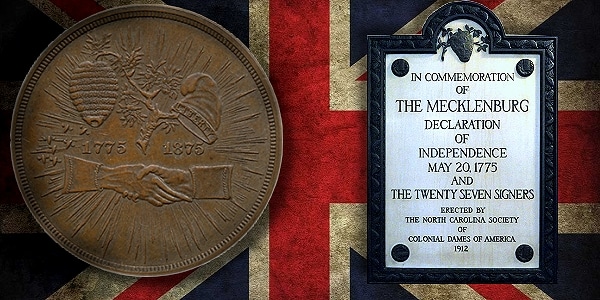 There is a problem, however. No original written copy of the May 20th resolves exists and no contemporary newspaper accounts of the meetings or the alleged public reading of the document have been found. “Proof” of the document comes from the memories and testimonies of those claiming either to have signed the original document, been part of the meetings that created them, or at least present in Charlotte at the time of the meetings. This makes some believe that the document and events surrounding it are more fantasy than reality – but no one knows for sure!

The story of the “Meck Dec” is far too deep for me to cover here, however, so it is suggested that those with further interest visit the websites listed at the end of this article. My focus will be on the commemoration of its centennial.

The 1875 Centennial of the Mecklenburg Declaration

As the 1875 Mecklenburg Declaration Centennial approached, plans were put in place for Charlotte to host a grand celebration of North Carolina’s role in helping propel the original 13 American colonies toward independence from Great Britain. The celebration would take place over two days – May 19 and 20 – exactly 100 years after the purported meetings that led to Mecklenburg County dissolving its ties to the British Crown.

On Wednesday, May 19, the Centennial celebration was officially launched at noon when a large US flag was raised on a flagpole standing 115 feet tall; it was specially built in Charlotte’s Independence Square for the Centennial. The raising of the flag was followed by a patriotic speech by NC Governor Curtis Hooks Brogden; the speech was said to be enthusiastically received by those in attendance.

The Centennial celebration’s second day featured a parade that started in Independence Square and proceeded approximately one mile out of town to the local fairgrounds. The parade featured military and fire companies, local fraternal organizations, music bands, and various local and state government officials in procession. Once at the fairgrounds, the large crowd in attendance listened to Mr. Seaton Gales of Raleigh read the five resolutions that became known as the Mecklenburg Declaration of Independence.

Mr. Gales was followed on the speaker’s stand by the Hon. John Kerr of North Carolina and Congressman John Bright of Tennessee. In the evening, a fireworks display was followed by additional patriotic speeches from South Carolina Governor Daniel Henry Chamberlain and Indiana Governor Thomas Andrews Hendricks, among others. Gov. Hendricks roused the crowd during his speech by boldly proclaiming “This centennial commemorates the greatest event in American history. On this spot, North Carolina declared herself free and independent of Great Britain, and from this beginning sprung the free and independent union of American States.”

It is estimated that between 25,000 and 40,000 people attended the Mecklenburg Centennial events.

Production of the Medal

As part of the centennial’s commemoration, it was decided by its organizing committee to have a medal struck. In early 1875, William Johnston, a successful North Carolina lawyer and businessman who was then also the Mayor of Charlotte, approached Richard Henry Linderman, Director of the United States Mint, concerning the striking of a commemorative medal to help mark the Centennial.

A private citizen or group contacting the Director of the Mint directly to get a medal authorized would not be possible today (the US Congress needs to be involved), but it was not uncommon in the mid-1800s. The engravers and production facilities of the Mint were often engaged to design and strike medals for a variety of private and personal purposes. Many of these personal requests were made directly to the Director or through one of the Mint’s engravers.

The Coinage Act of 1873 largely put a stop to this “Mint for Hire” practice by stipulating that the US Mint could only produce medals “of a national character” and that “no private medal dies shall be prepared” by the Mint. Director Linderman apparently believed the Mecklenburg medals met the “national character” standard set forth by Congress and so agreed to have the Mint strike the medals. He had dies for the medals prepared by Chief Engraver of the US Mint William Barber from design concepts provided by Johnston and the centennial committee; the cost of the dies was $75.

The medal’s obverse features several symbolic design elements. At its center is a tree branch supporting a Phrygian (Liberty) cap and a hornet’s nest (complete with flying hornets). The hornet’s nest is a reference dating to the Revolutionary War. After British General Lord Cornwallis unsuccessfully battled local militias in the Battle of Charlotte in September 1780, he wrote that Charlotte was “a hornet’s nest of rebellion.” “Hornet’s Nest” was soon adopted as the city’s moniker and later became part of its official seal. Also seen on the obverse are the anniversary dates “1775 – 1875” and a pair of clasped hands (with some of the longest fingers you’ll ever see!) representing the post-Civil War reconciliation of the North and South. The central design elements are surrounded by a series of rays. [See Figure 1]

The simple reverse features the inscriptions MECKLENBURG DECLARATION OF INDEPENDENCE and 20 MAY 20 1775. [See Figure 2]

The medals are 30.6 millimeters (mm) in diameter and 2.15 mm in thickness, with a plain edge. The silver medals were struck on existing US half-dollar planchets and thus have the standard coin composition of 0.900 fine silver and 0.100 copper, with a weight of 12.5 grams; my silver piece weighs 12.44 grams. The bronze pieces were not struck on existing coin planchets, but were struck using the standard copper cent composition of 0.950 copper and 0.050 tin and zinc; the two bronze pieces in my collection vary slightly in weight; one weighs 11.07 grams, the other 10.98 grams. The Mint rolled standard copper cent material to the appropriate thickness for the bronze medals and then created planchets using half-dollar-sized punches.

The US Mint struck 1,005 silver medals and 1,000 bronze medals on standard coining presses; 25 bronze and five silver proofs were also struck. Both medals are difficult to find today and, as would be expected, nice examples command quite a premium.

As I researched contemporary newspapers and magazines for accounts of the centennial events and mentions of the medal, I came across the following discussion in the New York Times: “two thousand silver ones struck of the size and value of half dollar pieces, and a large number of copper ones, which were freely distributed.” This was the first time I had seen mention of such a medal “giveaway” before. Considering the number of people attending the centennial celebration, I wonder how many were aware of the medals and if any issues arose when or if the free supply was exhausted?

Until next time, Happy Collecting!

To learn more about the history of, and controversy surrounding, the Mecklenburg Declaration of Independence, I would suggest starting with the following two websites: The Mecklenburg Historical Association at www.meckdec.org, and The North Carolina History Project at www.northcarolinahisotry.org.