With the wildfires raging in California, it’s important to remember that the Bureau of Engraving and Printing (BEP) offers a redemption program for burned, mutilated or otherwise damaged currency. Follow this link to learn more.

2.) Zimbabwe not yet ready for its own currency: finance minister

Speaking at a post-budget meeting, Chinamasa said Zimbabwe will only be able to re-introduce its own currency after addressing key macro-economic fundamentals that include having sufficient reserves for imports.

Zimbabwe adopted use of multiple currencies in 2009 after its currency had been rendered worthless by a decade of hyperinflation. The U.S. dollar has been the main transacting and trading currency but there has been an acute shortage of the greenback, resulting in authorities introducing local bond notes in November last year to ease the bank note shortages.

If the value is deferred, then what you have is a share. If their value is immediate then you have a currency. If it’s a share, things get complicated, and regulated very quickly.

So, is a cryptocurrency immediate or deferred? Well, the first bitcoin transaction bought two pizzas in Jacksonville, Florida. Other cryptocurrencies are to buy things that are shortly to become on offer but are at the moment part of an Initial Coin Offering. The SEC might see these as deferred…

4.) A Look at the Technology Behind Modern Currency Production

But how is modern cash even produced? What’s the technology behind it? The clues to the future of bills could be found in the United States’ currency production…

Bank Negara Malaysia (BNM) has issued commemorative coins in conjunction with the National Archives of Malaysia’s 60th Anniversary this year.

6.) So what if bitcoin is another bubble?

7.) A brief history of Bitcoin hacks and frauds

Here we present a short history of the Bitcoin world’s most significant scams and hacks. It’s worth noting that all of these attacks were against Bitcoin-related services, not the core Bitcoin software. As far as we know, the Bitcoin network itself is highly secure, though of course that’s little comfort if you entrust your bitcoins to a third party that gets hacked…

The Winklevoss twins, famously known for suing Mark Zuckerberg after claiming he stole their idea for Facebook, are now Bitcoin billionaires, according to a few reports. Cameron and Tyler Winklevoss won $65 million from the Facebook lawsuit, and invested $11 million of their payout into Bitcoin in 2013, amassing one of the largest portfolios of Bitcoin in the world…

Despite the dog and pony show offered by President Nicolas Maduro, most people are not taking the creation of the Petro cryptocurrency seriously… Many people now accept Bitcoin, Ethereum, and other digital currencies because they have faith in them. The same cannot be said for the government of Venezuela…

10.) US Senate Moves to Criminalize Non-Disclosure of Cryptocurrency Ownership

The US Senate Judiciary Committee is currently tackling bill S.1241 that aims to criminalize the intentional concealment of ownership or control of a financial account. The bill also would amend the definition of ‘financial account’ and ‘financial institution’ to include digital currencies and digital exchanges, respectively…

11.) A video parody of that guy at your office who bought bitcoin that one time…

Sorry Fam but your boy is retiring to officially day-trade #Cryptocurrency. No idea how y’all do that 9-5 noise…

The Lincoln, Nebraska Police Department requested assistance on a counterfeit coin case in June of this year. Detectives are now investigating a kidnapping/homicide of a female with subjects pictured below as persons of interest. The investigation has revealed that these two subjects have traveled the the Central Plains and possible Southeast, defrauding individuals with counterfeit coins. The male subjects given name is Aubrey C. Trail and the female Bailey M. Boswell. The male subject has introduced himself as Allan and claims to run an antique business under the name of A&B Antiques.

About the same time in June, the Numismatic Crime Information Center (NCIC) sent out two alerts regarding the below subjects as suspects in a theft at a Utah coin shop. Additional information on a second alert reported that the suspects had been seen in Iowa and Tennessee. The male subject below introduced himself as Allan in Utah. These are the same subjects as pictured above. 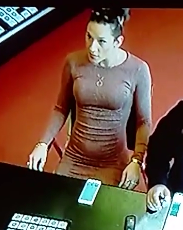 The subjects are currently in custody but Detectives are looking for anyone who has come into contact with these two subjects. We are also looking for additional victims.

The Czech National Bank has launched a competition for the new hundredth crown, which will lead the portrait of Alois Rašín, the first Czechoslovak Finance Minister. However, it will only be a special edition for the anniversary of a hundred years of building the Czechoslovak currency. Existing hundreds of years with Charles IV, the new proposal will not replace the current banknote…

The Central Bank of Uruguay (BCU), will soon circulate new $ 50 bills in commemoration of the 50 years of creation of the institution…

The Government of Mauritania will combat monetary falsification with the issuance of new notes of its currency, the uguiya, which will have a value ten times greater than that of the old ones, announced today the country’s president, Mohamed Uld Abdelaziz.

In a speech to mark the 57th anniversary of Mauritanian independence, Abdelaziz said that the new banknotes will go into circulation on January 1…

The issuing of the NIS 50 note was met with anger by religious and other figures in Israel, when it was unveiled in September 2014…

The Canadian War Museum has confirmed it is the buyer of Cpl. Colin Barron’s Victoria Cross, meaning the medal will stay in Canada… An anonymous donor carefully wrapped the rare gold coin in a $10 bill and then dropped it sometime Thursday morning in a kettle in front of County Market on North Vermilion Street. Last year, the gold coin turned up in a kettle at the same location…

Someone left a gold coin valued at over $1,000 — wrapped in a $100 bill — inside a Red Kettle campaign pot in at the Kroger on North Bechtle Avenue in Springfield…

20.) Gold Coin Found in Maryland Salvation Army Kettle May Be Worth $1,300

The coin was found in one of the group’s iconic red kettles in Gaithersburg, Maryland, the Salvation Army announced. A handwritten note accompanied the coin, reading, “Glory to God in the highest and on earth, peace, good will toward men.”

According to The Salvation Army, a South African Krugerrand gold coin was dropped into a kettle inside JCPenney at Brookfield Square on Friday, December 1st, with a value of $1,300-$1,400…

For the third year running, the donor dropped a rare gold Double-Eagle coin into the Salvation Army kettle at the Canton HyVee. The Secret Santa plans to buy back the coin for $1,200. Last year, the donor purchased the coin for $1,500…

The coin is a 1980 South African Krugerrand, according to McGee. It’s worth $1,201, according to an appraisal made Wednesday at the Brownlee Jewelers store off Dave Lyle Boulevard in Rock Hill…

Someone dropped a gold coin valued at $145 in a Salvation Army red kettle outside a west Omaha Hy-Vee Supermarket on Saturday. The 2016 American Gold Eagle coin weighs one-tenth of an ounce…

Marcos Marquez, an administrator with the nonprofit, told The Oregonian/OregonLive on Thursday that before the amazing gift, donations were lagging and the campaign was in danger of missing its goal for the holiday season…

After cleaning the money, it became clear that they were copper coins and belonged to the Atabeys era, a dynasty of Kipchak origin that controlled most of northwestern Persia including Arran, most of Azerbaijan, and Djibal…

The pendant and other jewels and coins buried with the woman were among the spectacular discoveries mainly made by metal detectorists – including … more than 2,000 silver Roman coins in Piddletrenthide, Dorset, which the finder and a local archaeologist managed to lift together with the clay pot holding them and the entire block of soil in which it was buried, so it could be studied at the British Museum…

28.) Archaeologists expose Muslim-Jewish ‘dialogue’ in Jerusalem from 1,300 years ago

As evidence, the researchers offer 1,300-year-old coins and other vessels from the Umayyad period (from 638 CE) which bear the seven-stemmed menorah…

The coins, which date from the early 19th century and come from various countries, were found when the current municipal headquarters of the Bulgarian town of Karlovo was under construction…

30.) Rare coin collection with links to the Aussie gold rush now on the market — for $6.475 million

The 10-piece coin collection, known as Gold and the Nation, includes two 1852 Adelaide Gold Ingots, valued at $1.35 million each. One of the ingots was previously owned by King Farouk of Egypt, before being sold to an American collector.

The collection is being sold by Australian rare coin dealer Coinworks, and managing director Belinda Downie said they represented an important part of Australia’s history, as the ingots were used as an early type of currency after the gold rush had begun but before coinage had been introduced…

31.) Found: A Fortune in Gold Coins in a Box of Donated Food

ANJA MASER, MANAGER OF THE Lindenhof Senior Center in Lürrip, Germany, was unpacking a box of donated food when she encountered a heavy box hidden below. Inside was—literally—treasure. The box contained gold coins, 109 in total, featuring a springbok, South Africa’s national animal. A quick online search revealed that they were highly valuable Kruggerand bullion coins…