In a program that would mimic the ongoing commemorative collection that features state landmarks, the US Mint would churn out coins featuring women selected by leaders from all 50 states, five territories and DC. Their portraits would appear on the back side of the coins, opposite George Washington…

2.) As Congress considers women on quarters, where’s the Harriet Tubman $20?

Since current Treasury chief Steve Mnuchin took over however, the momentum behind Tubman for $20 appears to have stalled. Last fall, he called it “not something I’m focused on at the moment.” And in January, the Donald Trump appointee said he had made no decisions as to the fate of what would be the first black woman to appear on American paper currency…

The dearth of lower denomination coins in circulation may bother shopkeepers in the rest of the country, but not in Mangaluru. This is thanks to a coupon system that shopkeepers here have evolved as an alternative. The system works on the basis of mutual trust between various shops in the city…

4.) Forgotten victims of the cashless society

“Excuse me,” he said, eyes downcast, fingers fidgeting. “Do you have a dollar for something to eat?”

It was a convenient truth, one I regretted as I watched him shuffle off. How easily I’d blamed “the system”. I thought of Denny then, too, and others like him. What would happen to these people if “the system” evolved into one that made being a charitable human increasingly inconvenient? How easily would we collectively defer to “Sorry, I’ve only got a card”?

Numismatic Ambassador Cheryl Maisch died March 3 at the age of 73 in Mobridge, S.D.

She and her husband Robert were jointly given the honor Aug. 15, 1991, at a meeting of the Token and Medal Society held during the American Numismatic Association’s centennial convention in Chicago.

Her introduction to coin collecting was on one of her first dates with Robert, where they went to a coin show in Gorham, Maine. They were married Sept. 12, 1971…

News Wire Under the Radar

Carr created an image using a digital sculpting program that he wrote himself and a coin press that at one time was used in the Denver Mint.

In years past, Carr has designed the state quarters for New York and Rhode Island…

7.) Baptism of Christ is inspiration for new Malta coin

The Central Bank of Malta has issued numismatic coins in gold and silver depicting ‘The Baptism of Christ’, a statuary group by Giuseppe Mazzuoli (1644-1725).

The President, who is visiting Odisha, released the coins during the centenary celebration of Rastriya Sanskrit Sansthan in Puri…

When the Bitcoin first came along, one of its biggest draws was the use of blockchains to make the currency secure in our digital world. Unfortunately, digital wallets are still open to hacking, and people are still open to scamming — so, so much scamming…

10.) Bitcoin Mining Was Just Banned in a Small Town

A small lakeside town in upstate New York is fed up with Bitcoin miners using up so much of its low-cost electricity.

Plattsburgh gets cheap power from the St. Lawrence River, driving down electricity costs for residents, but it exceeded its allotted amount of hydropower in December and January, according to a local newspaper. Some complained that their bills surged as much as $300…

11.) Where Could Bitcoin Succeed as a Currency? In a Failed State

In the US, bitcoin is primarily a speculative investment, whose soaring price has been compared to a bubble. But in Venezuela, where inflation topped 2,616 percent last year, cryptocurrency is a way around restrictions on holding foreign currency, and in some cases, a means of survival. That’s made Venezuela an interesting laboratory for cryptocurrency serving as both a real currency and a viable means of storing value. As the government prints more bolivars, their value plummets … Bitcoin holders, by contrast, have something most people don’t: a currency that’s worth something…

13.) All the Places Now Cracking Down on Bitcoin and Cryptocurrencies

Beijing has been leading an all-out assault on cryptocurrencies. Thus far, government officials have outlawed initial coin offerings and cryptocurrency exchanges within China’s borders, in an effort to curb crypto trading. They’ve also cut off access to online trading platforms and mobile apps that can act like exchanges. The government claims this is to control risky financial speculation, but protecting China’s yuan probably plays a role as well…

14.) What the Founding Fathers’ Money Problems Can Teach Us About Bitcoin

But figuring out which bill to trust was hard—a daily calculation for the average American. If you lived in New Hampshire and someone handed you a $5 bill issued by a Pennsylvania bank, should you trust it? Maybe you’d only give someone $4 worth of New Hampshire money for it, because, well, to truly redeem that bill for gold or coins you’d need to travel to Pennsylvania. The farther the provenance of the bill, the less it might be worth.

“As crazy as this sounds, this was normal for Americans,” says Steven Mihm, associate professor of history at the University of Georgia and author of A Nation of Counterfeiters. In a very real way, Americans thought daily about the philosophy of currency—what makes a bill worth something?—in a way that few modern Americans do. It makes them far more similar to those digital pioneers today, pondering the possible value of their obscure alt-coins…

Classified documents provided by whistleblower Edward Snowden show that the National Security Agency indeed worked urgently to target bitcoin users around the world — and wielded at least one mysterious source of information to “help track down senders and receivers of Bitcoins,” according to a[n] … NSA report dating to March 2013. The data source appears to have leveraged the NSA’s ability to harvest and analyze raw, global internet traffic while also exploiting an unnamed software program that purported to offer anonymity to users, according to other documents…

Venezuela officially launched the Petro, the first cryptocurrency backed by oil reserves, on Feb. 20. Maduro has said the digital coin aims to combat sanctions and the “economic war” waged by the United States government and its junior partners against his country and advance “on issues of monetary sovereignty, to make financial transactions and overcome the financial blockade.”

The oil-backed cryptocurrency managed to raise US$5 billion during its pre-sale. Maduro thanked Russian firm Nem…

17.) US blocks transactions with Venezuela in virtual currency, digital coin or digital token

On 19 March, the US President Donald Trump issued an executive order prohibiting US transactions with Venezuela’s digital currency, a move to further block the South American country’s access to US financial market…

“The seminar provided attendees with the basic tools and resources to conduct a thorough numismatic crime investigation,” said Doug Davis, Founder/President of NCIC.

To enhance the information being taught in the classroom, attendees were escorted through the bourse floor where they were able to observe and ask questions to dealers in attendance.

“Since the majority of the attendees had never investigated a numismatic crime, the experience was extremely valuable,” said Davis.

Each investigator was also given examples of slabbed coins and paper money provided by PCGS, PCGS Currency, NGC, PMG and ANACS.

“Attendees were encouraged to take the examples back to their respective departments and share information they learned with other investigators within their investigative units,” said Davis.

The attendees were presented certificates of attendance and received eight hours of accredited training through the Texas Commission on Law Enforcement.

On 3/12/18 between the hours of 4:20 am – 7-30 am, burglars came through the roof and disabled the alarm, wireless transmitter and battery. The backup would not work without a battery. The suspects then used a diamond saw to cut through a large Melnik safe door.

The note pictured below has been reported stolen: 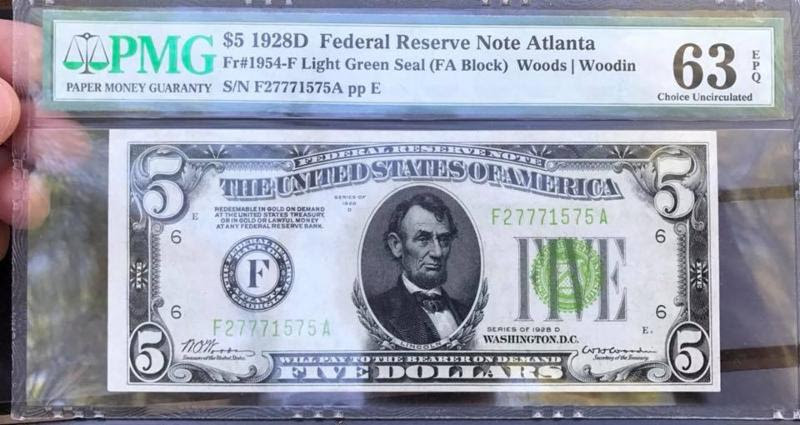 The Numismatic Crime Information Center assisted the Lincoln Nebraska police department several months ago with suspects of interest in a murder/kidnapping. NCIC connected the suspects to coin shop thefts in UTAH which allowed Detectives to hold the suspects for additional charges, giving them time to further investigate and uncover additional evidence to support their case. The male suspect, Aubrey Trail, has admitted to the killing.

21.) New CHF200 banknote to be introduced in August

23.) Romania says NO to gold repatriation exodus from Great Britain

17-year-old Nihad was flooded with emails from across the country who had seen his story and were keen to help. Some offered the coin in exchange of money while others offered it freely in support of his hobby.

“I was surprised as I didn’t expect to find it that fast and when the grocery shop worker showed it to me I was really happy and thanked him a lot,” said Nihad, who did not expect to receive such attention.

“I didn’t know that I will get all this support from the community as I received emails offering me the coin as a gift and that encouraged me and made me feel that a lot of people liked what I’m doing,” he said.