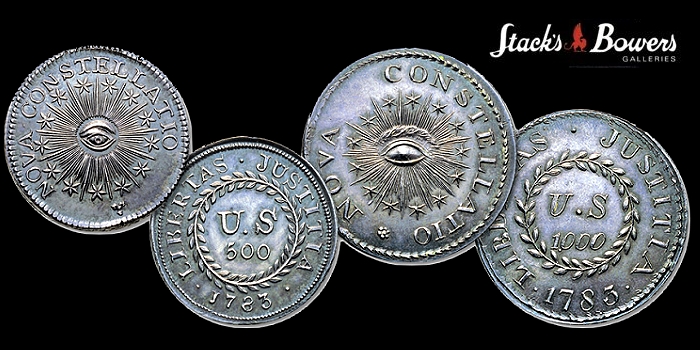 This story begins in 1783, when a remarkable group of pattern coins was struck: the 5-unit piece, the “bit” of 100 units, the “quint” of 500 units, and the “mark” of 1,000 units. Sylvester S. Crosby, in his landmark Early Coins of America book, commented, “These are undoubtedly the first patterns for coinage of the United States and command an interest exceeding that of any others in this class.”

For decades the existence of these coins had been forgotten by most numismatists and historians, until circa 1844 when the marvelous discovery was made of two specimens in an old desk. Dating this find to circa 1844 is drawn from a commentary by Dr. Montroville W. Dickeson in his 1859 American Numismatical Manual, page 91:

“[The two pieces] belonged to Charles Thomson – a contemporary and particular friend of Benjamin Franklin – who was a very decided advocate of the just rights of the colonies and distinguished himself greatly by his uniform patriotism. They were discovered after the death of his son, which occurred, we are informed, some 15 years ago, near Newark, Delaware, in the secret drawer of an old desk that formerly belonged to his father.”

These two rarities were acquired from the “gentleman of this city,” Rathmell Wilson by name, by Philadelphia dealer John W. Haseltine and years later were sold into the Garrett Collection.

In a statement to John W. Haseltine, May 28, 1872, Wilson gave further information concerning the pieces: ‘These were the property of Hon. Charles Thomson, secretary of the first Congress. At his death the property was left by will to his nephew, John Thomson, of Newark, state of Delaware. These two coins were found in the desk of deceased Charles Thomson and preserved by his nephew during his life; at his death they came into the possession of his son Samuel E. Thomson of Newark, Delaware, from whom I received them. So you will perceive that their genuineness cannot be questioned; as they were never out of the possession of the Thomson family, until I received them.’ “

Of the 1783 mark just one specimen is known today, the example which traces its pedigree to Hon. Charles Thomson. The obverse displays an all-seeing eye surrounded by rays and stars, with the legend NOVA CONSTELLATIO around. The reverse bears the legend LIBERTAS JUSTITIA 1783, a wreath, and within the wreath U.S. 1.000.

Of the quint, only two specimens are known, each of which has a slightly different design. The obverse of one is similar to the mark, but of reduced size, and with the legend NOVA CONSTELLATIO surrounding the all-seeing eye with rays and stars. The second variety has the all-seeing eye with rays and stars but lacks the NOVA CONSTELLATIO inscription. The reverse of both is from the same die and is similar in concept to the mark, but with the denomination 500.​