Since its release in 2019, The Half Cent: 1793-1857, self-published by former Early American Coppers (EAC) president William Eckberg, has been a mainstay at the CoinWeek offices for the information it provides on America’s “greatest little coin”.  An update on Breen’s outdated work, Eckberg’s book is an accessible read – although it is written from Eckberg’s particular perspective.

The direction that fellow EAC member Ed Fuhrman advances in his new book, The Half Cent Handbook: Draped Bust Varieties: 1800-1808, is certainly different. While the Fuhrman text is also written in a conversational tone, it focuses on collecting each issue by die variety and die state. That said, there is next to nothing provided here regarding the who, what, when, and why of each variety’s creation. Fuhrman preempts this criticism by devoting a single page to lay out what is not covered in his book. Potential buyers should note that Fuhrman’s uncovered areas include mintage figures, die variety emission sequences, historical background information, anecdotes about famous collectors, discussion of mint errors, and reverse die rotations for each variety. To us at the CoinWeek offices, these are critical areas of interest, and asking why can a volume cannot also include this information is fair and reasonable, given the title’s $105 price.

On the other hand, Fuhrman readily admits that he is charting his own course with the way he chose to lay out his book. This is the author’s right, but a clearer (and less defensive-sounding) explanation as to why certain areas of key information were omitted would have made these omissions less jarring. 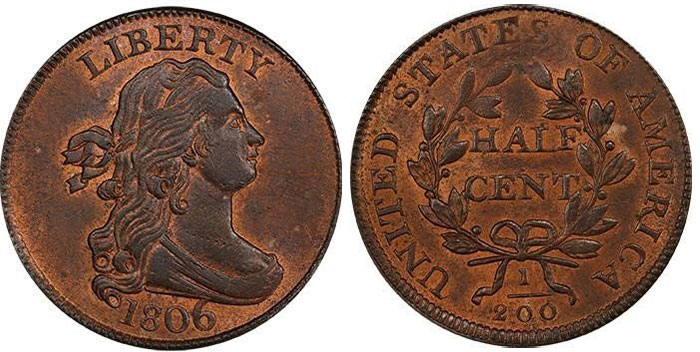 That said, what the book clearly aims to accomplish is to mainstream the highly technical facets of the “on the coin” numismatics of half-cent variety attribution and die state collecting. We find it commendable that Fuhrman chose to illustrate a grade-by-grade study of the Draped Bust half cent type, breaking down each grade by tier. Beginner to Intermediate level collectors would do well to learn from Fuhrman’s descriptions of Choice, Average, and Below Average quality coins, especially since many circulated half cents, even higher-quality ones, are sold raw and not all examples certified within a grade are treated the same by sophisticated buyers. Fuhrman stops his survey at Mint State 60, avoiding a can of worms that has long had the third-party grading services and the early copper collectors at odds with one another.

Fuhrman also discusses net grading. “Net grading” is another phrase for market grading – that is, grading a coin based on what the market will bear for it as opposed to strictly adhering to a technical standard. Net graded coins have problems that may or may not be obvious. They are still collectible and sometimes a net graded coin may be the best example available to a specialist collector. Fuhrman provides eight examples and narratives to help collectors acclimate themselves to a number of issues that are typical for the series. Collectors, Fuhrman notes, will have to “get out there” to really internalize the issues involved with net grading.

Eckberg and Fuhrman’s approaches to breaking down half cents are different, and while CoinWeek readers would do well to consider buying both, Fuhrman’s illustrated approach may prove more beneficial to those simply looking to collect the coins. Nevertheless, we wish more traditional numismatic historical narratives for each issue had been included. We believe that this information is important.

Half-cent specialists will find much to enjoy in The Half Cent Handbook. Despite some of its unpolished qualities, the material facts presented are sufficiently expert. One would do well to refer to the book’s die state breakdowns before making a major purchase, just as one would do well to read up on what constitutes quality for the grade.

Half cents may not get the love that their larger one-cent counterparts get in the numismatic industry, but the series has been blessed with two very capable books published back to back. The approaches taken to the material are as different as the personalities of the authors themselves.

Fuhrman’s book is published in hardback in limited numbers. Interested collectors may want to reach out to secure a copy as soon as possible by emailing the author at [email protected].