BACK IN THE GAME

Yes, after a bit of a dry spell I’ve put together a list of boards for sale, and this is included with the present newsletter. The Bellevue Hoard of coin boards finally ran its course by June, and the entire world should now be well supplied with common pieces. It’s become very hard to acquire new inventory of desirable boards, and I have only myself to blame. Tireless promotion of coin boards as collectibles, both through my newsletter and other venues, has driven up prices to the point where I’ve most often become the underbidder. I swung and missed at several auctions of scarce titles during the past quarter, and when I can acquire something worth listing it’s typically through some back channel in which the seller contacts me directly.

There were a number of listings for boards over the past few months, most typically of the sort fellow collectors already have. There were, however, a few standouts. A Whitman Third Edition board for Washington Quarters, not rare but popular, brought $28. It would have realized more were it not for some moisture damage visible only on the back.

Far more scarce was the same title published by J. Oberwise & Co. An example grading Fine or so realized $41. This is one of only four Oberwise boards that were labeled as COLLECTION CARD rather than PREMIUM CARD, as there was then no premium value to circulated Washingtons.

I was the underbidder at $40 since I didn’t need it for my own collection. A Whitman First Edition board for Liberty Head Nickels having the rare black backing was another highlight, but that one has already been placed with a customer.

The best deal, however, was a lot of Third Edition Whitmans that included two each of the Washington Quarter board, two each of the Morgan Half board 1903-15, and one each of the rare boards for Large Cents 1793-1825, Liberty Seated Dimes 1837-1862, and Liberty Standing Halves. I was going to place a safety bid on this lot as soon as I saw it, but before that happened a reader of CBN struck a deal with the seller and stole them away. At right is a photo of six of the boards.

THERE’S GOLD IN THEM THAR ALBUMS I’ve been selling my personal collection of Library of Coins albums on eBay, and while scanning one for cents with no printing I caught a reflection peering out of one opening. Attempting to shake this coin free released a second! I have no idea when or from whom I bought this album, but you never know when those very slim coins will get wedged between the cardboard page and its covering paper. Long-time reader Chris Buck spotted this item in an antique store window and snapped a photo. My coin board book includes something similar with the observation that many boards must have been lost to the World War II recycling program during a time of paper shortages. It’s likely that the goal was primarily to scrap old newspapers – but paper is paper, and that’s the primary material from which coin boards were made. It’s only logical to assume that the conversion from boards to folders after 1940 meant doom for many of the former. The history of coin boards is indelibly linked to the period in which they were printed.

My books on the products of both the Coin & Currency Institute and the Whitman Publishing Company made reference to certain products that were likely to have been produced but had not yet been seen. The recent acquisition of a supply catalog published in 1964 by the Omaha dealership of Aubrey and Adeline Bebee revealed both images and pricing for three products that previously were in the dark. I’m reproducing those images here as a supplement to those books. The Bebee catalog reveals that the bulk of its $26.95 price (a whopping amount of money in the ‘60s) was due to the attaché case rather than its contents! I seriously doubt that more than a very few of these were sold.

Far more practical would have been the album carrying case seen in the second image. I recall one of these being offered on eBay years ago with a really terrible photo, but that was long before I believed there really was such a thing. I’d love to have one now, but I’ve never seen it listed since that time.

A similar product for Whitman’s folders was produced under the Laymond brand, and this is illustrated on page 45 of Volume Three.

Finally is the slipcase made for Whitman folders. I do have a number of these, and I’m surprised the company could have sold them so cheaply even then. The 35¢ retail price was the same as that of the folders 1953-67, but the materials surely must have cost more. Perhaps it was viewed as a loss leader.

It’s hard to believe that new varieties of boards are still appearing, but then Mr. Oberwise was very prolific. The scarce Oberwise board for Washington Quarters mentioned above in “Market Activity” is different from those previously seen. O25¢Dw is new with the “w” backing, of course, and it is printed for dates through 1942 and with incomplete mintages for 1941.

In the catalog of Whitman’s Second Edition of coin folders (page 72 of Volume Three), it should be noted that the distance of the border design at the left of the cover for Second Series folders may be as much as 5⁄8” from the spine on the latest printings, while Third Series folders evolved from 5⁄8” on the earliest folders to as much as one inch on the latest. These represent transitional uses of old materials with new ones for economy’s sake. Also within the Second Edition, variety W10¢D2.2b has been confirmed as listed.

In its efforts to keep folders from becoming too soon obsolete, Whitman typically prints a few dates ahead of the actual year.

This can backfire if the United States Mint doesn’t stick to the current plan, as in 1965 when mintmarks were dropped, and everyone’s folders had printed openings for 1965-D, 1966-D, etc. Somewhat less dramatic but still fun as collectibles are these two examples of W25¢G2.2. One was printed in 1948 in anticipation of 1949’s coinage, but the other was printed in 1950 when it was known that the San Francisco Mint had produced no quarters the previous year. The recent publication of the 1950 census has provided further opportunities to research coin board publishers. For Leiser W. Schnelling, publisher of the Colonial brand boards, it includes a link to the website findagrave.com. From this source comes a nice photo of his headstone.

The Colonial Coin & Stamp Company produced truly beautiful coin boards 1935-41 before transitioning to a much scarcer line of coin folders. It seems to have been a rather prominent player in the New York City market until Schnelling’s apparent retirement in the late 1940s.

Long-time reader Donald Kocken advises me that he’s selling his “lifelong collection of vintage Wayte Raymond [albums] intact,” adding that “each album contains empty pages to complete a series with most of the pages being unused.” His collection includes 59 sets within small binders (plus 248 extra pages), 24 sets within large binders (plus 26 extra pages), and two empty binders.

You’ll recall that Don also put out a nifty little book about the various kinds of coin folders and albums made over the years.

He says that the Second Edition of his book is nearly sold out, and he’s planning a Third Edition afterward.

ON THE ROAD AGAIN!

My cancer treatment has progressed sufficiently that I expect to be attending the Fall Whitman Baltimore Expo October 27-29. This follows a long period of being homebound, so it will be most satisfying to get out there again. I hope to see some fellow board collectors there. 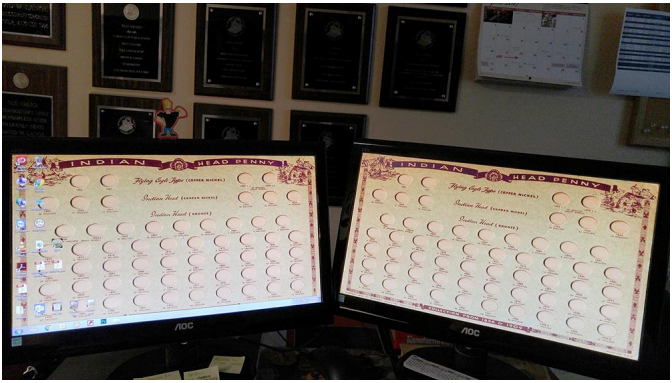 All books purchased from David W. Lange will be signed unless requested otherwise, and personalized inscriptions are available upon request. Payment may be made by check to David W. Lange or via PayPal to [email protected]. David W. Lange may be contacted at POB 110022, Lakewood Ranch, FL 34211 or by telephone at (941) 586-8670. His website providing a history of vintage coin boards and from which he buys and sells such items, is coincollectingboards.com.