News and Analysis regarding scarce coins, coin markets, and the coin collecting community #98

When people think about rare dimes, their minds do not often turn to 1846 Liberty Seated Dimes. They think instead about the Draped Bust, Small Eagle Dimes of 1796-97, the widely recognized Heraldic Eagle Dimes of 1804, and 1822 dimes.The 1822 issue is the key to the series of Capped Bust Dimes. The most famous dimes of all are 1894-S Barber Dimes. F

Even among Liberty Seated Dimes, several other issues receive much more attention than the 1846. Truly rare or very scarce San Francisco Mint issues of the 1850s and 1860s are often discussed. Furthermore, the 1885-S is very scarce or rare, and is a frequent topic of conversation, especially when a high quality 1885-S dime is publicly auctioned. The 1860-O is definitely rare and is the most coveted New Orleans Mint Liberty Seated Dime.

The Carson City, Nevada (CC) issues of 1871 to 1874 are probably the most famous Liberty Seated Dimes. Two weeks ago, I mentioned the unique 1873-CC ‘No Arrows’ Dime, and I will be discussing it before it is auctioned at the ANA Convention in Philadelphia in August. 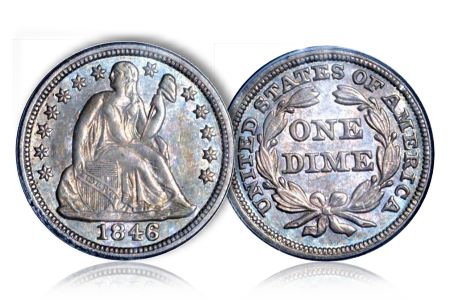 Liberty Seated Dimes were minted from 1837 to 1891. There are five types (or subtypes). The most famous dime of the 1840s is the 1844, which has received an odd and inappropriate nickname, ‘Little Orphan Annie.’ This name is often mentioned in auction catalogues. The reality, however, is that the 1846 is much rarer than the 1844. Indeed, the 1846 has been overshadowed by the 1844 and by other Liberty Seated Dimes.

I hypothesize that there exist around 335 1846 dimes, in all grades, including those that do not qualify for numerical grades in accordance with the criteria employed by the PCGS or the NGC. In contrast, the PCGS CoinFacts site estimates that there are “500.” Rich Uhrich figures that there are just “200 to 250”!

Uhrich is a specialist in circulated bust and Liberty Seated coins. Rich has owned “around twenty 1846 dimes over the last seven years,” including a few that are not gradable.

Uhrich guesses that there exist around 1200 1844 dimes. The PCGS estimates that there are one thousand. In my view, there must be more than nine hundred.

In July 2003, Heritage offered a single lot, from one individual consignor, of 612 1844 dimes. According to Heritage cataloguers, only one was a ‘possible’ forgery, the other 611 being genuine. Evidently, one collector on the West Coast spent years adding to his hoard of 1844 dimes. As a considerable number of 1846 dimes are ensconced in private collections or estates, or held by people who have forgotten that they have them, I suggest that this one person could not have accumulated even two thirds of all existing 1844 dimes.

Why were 1844 dimes, not 1846 dimes, chosen for such a hoard? According to legend, in the 1930s, a dealer in Kansas City fervently promoted 1844 dimes. It is believed that he named this issue, “Little Orphan Annie,” who was a very popular cartoon character during this era. The ‘Little Orphan Annie’ comic strip was started by Harold Gray in 1924. Gray died in 1968, yet this comic strip continued to be syndicated until 2010 or so.

Even if this hoard is not counted, Heritage has offered more than ten times as many 1844 dimes as 1846 dimes. All such offerings are not different coins. Sometimes, the exact same coin is repeatedly consigned to auctions.

Though nameless, 1846 dimes are, indisputably, much rarer than 1844 dimes, even though many collectors seem to think the opposite. Much more has been written about 1844 dimes.

There are also Proof 1844 and Proof 1846 dimes. Regarding the types of Liberty Seated Dimes that were minted prior to 1860, it is extremely unusual for someone to collect Proofs ‘by date.’ Most collectors of such Proofs are assembling type sets. In contrast, most collectors who demand 1846 business strikes are assembling sets of Liberty Seated Dimes, collecting ‘by date.’ In last week’s column, I discuss the meaning of the term ‘by date.’

I will write about Proof 1846 Liberty Seated Dimes in the future. The topic here is business strike 1846 dimes, those minted by ordinary means in a routine fashion. On Thursday, March 22, Stack’s-Bowers will auction an 1846 that is PCGS graded AU-50 and has a sticker of approval from the CAC. I have not seen it.

The CAC accepts submissions of coins that are already certified by the PCGS and the NGC. If experts at the CAC determine that, in their view, a submitted coin’s grade falls into the middle or high end of the range pertaining to its already certified grade, then it receives a green sticker of approval from the CAC. Uhrich maintains that “the majority of 1846 dimes are gradable.” Rich further states that half of these grade less than VG-10. I agree with Rich in that fewer than one hundred 1846 dimes grade Fine-15 or higher.

It is important to keep in mind that many collectors of circulated coins prefer coins that are not certified. Such a preference may be illogical. In my opinion, for scarce or rare coins valued at over $250 each, collectors should consider only coins that have been certified by the PCGS or the NGC. Many pre-1934 U.S. coins valued at less than $250 each should be PCGS or NGC certified as well.

I am not suggesting that these two services do not make mistakes and I am NOT implying that I agree with more than 85% of all PCGS or NGC assigned grades. It is indisputable, however, that buying PCGS or NGC certified coins involves much less risk than buying coins that are not so graded.

Despite the rather apparent benefits of buying PCGS or NGC certified coins, many collectors of circulated coins spend more than $250 each on not certified coins. The data published by the PCGS and the NGC will always not include a substantial number of gradable 1846 dimes. In my view, for circulated, pre-1900 coins, it is important to make a distinction between the level of detail, technical issues and surface quality. Grading guides, such as Photograde, relate primarily to the level of detail or ‘sharpness.’ Technical issues relate to contact marks, scratches, and how well the coin was manufactured. Toning, the overall effects of cleanings if any, the status of the ‘skin’ of a coin, and luster are factors considered in a determination of surface quality.

Yes, I know that experts at grading services do not focus solely on the level of detail on each circulated coin. Even so, there is a limit to the extent to which other factors can play a role in the determination of a numerical grade for a circulated coin. A coin that has the details of a VF-20 will probably not be PCGS graded VG-08 or EF-45 because of very low or very high scores in other categories.

Therefore, in relation to Rich’s statement that there is a retail price range of  “$1200 to $1800” for a “VF-20” 1846 dime, I contend that a primary point to be learned is that gradable 1846 dimes with the details of a VF-20 grade coin vary widely in value because of technical issues and/or surface quality.

There are aspects of some individual coins that are very difficult to explain. One reason why gradable 1846 dimes in the AG-03 to Fine-12 range tend to be sold privately, rather than consigned to auction, is that the buyers often feel a need to see the coins in actuality, rather than make decisions based upon seeing images in catalogues.

To a greater extant, these other factors are incorporated into the numerical grades of coins that rate 55 or higher. I find, though, that coins look much different in actuality than they do in pictures. There is a sharp limit to the usefulness of even the highest quality images. There is another 1846 that is PCGS graded MS-63. Information about it has been published on the NGC website, in the NGC Set Registry.

This other PCGS graded MS-63 1846 is owned by the collector who calls himself “YeOldOne.” He prefers that his real name not be mentioned. “For the longest time this coin was the only one graded in mint state” and “it is still in a [‘old green label’] holder,” YeOldOne states. He reveals that he bought this coin from a New Jersey dealer in 2003.

Gerry Fortin remembers that he considered purchasing this same coin from this same dealer in 2002 or early 2003. “In hindsight, it was a mistake” not to aquire it, Fortin now laments.

Researcher Saul Teichman reports that Bowers & Merena auctioned a PCGS graded MS-63 1846 in January 1999. In July 2004, the Spectrum-B&M auction catalogue stated that “two examples have been certified AU-58 by PCGS, and there is only a single MS-63 representative finer.”

So, the YeOldOne 1846 is very likely to be the dime that B&M auctioned in Jan. 1999. From where, though, did the PCGS graded MS-63 1846, with a CAC sticker, emerge? I had never heard of the “Findley Collection” before I saw this name in the Jan. 2009 Heritage FUN auction catalogue.

There are now two that the PCGS has graded “AU-58,” and one that the NGC has so graded. Only one of these three has a CAC sticker, though I do not know if the other two have ever been submitted to the CAC.

The PCGS graded AU-58 1846 dime with a CAC sticker was auctioned by Heritage in West Palm Beach during the summer of 2009. I attended this auction. Unfortunately, I cannot access most of my past auction catalogues right now.

Gerry Fortin has a PCGS graded AU-58 1846 dime. Images of it may be viewed via the Internet, in the PCGS Set Registry, where Fortin has the top ranked set of business strike Liberty Seated Dimes. His “1846 PCGS-58 dime was purchased during September 2005,” Gerry reveals. The seller was Warren Mills.

The images of Fortin’s 1846 suggest that it has been dipped at some point during the last thirty years. While I cannot currently access my Lovejoy or Numisma ’95 catalogues, Saul Teichman tentatively recollects that the Pelletreau-Bareford-Lovejoy-Bolen 1846 has been “dipped.” Fortin, however, suggests that his 1846 and the Bolen 1846 are different coins.

Most 1846 dimes are not nearly as expensive as the top ranked ones that I just cited. There are many that sell for less than $400 each, especially ungradable ones. I already mentioned an auction result of just $99.

Unfortunately for the budget minded collector, there are some more expensive Liberty Seated Dimes dating from 1860 to 1891, including the ‘With Legend on the obverse’ and ‘Arrows & Legend’ types. Collecting the early issues of Liberty Seated Dimes, however, may be fun and intriguing.

As 1846 dimes are truly rare, maybe even very rare, these may be exceptional values from a logical perspective. Very rare, or even just very scarce, coins in some other series tend to cost much more. For example, there exist more than one thousand 1901-S Barber Quarters. A 1901-S quarter in Good-04 grade may cost $4000 to $5000.