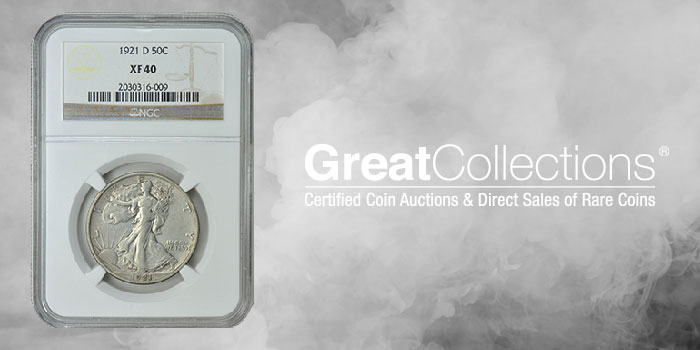 On Sunday, April 12, bidding ends on GreatCollections.com for this 1921-D Walking Liberty half dollar, graded XF-40 by NGC.

The 1921 half dollar struck at the Denver Mint is the lowest-mintage issue of the entire Walking Liberty series. At only 208,000 struck, it is more scarce than the Philadelphia 1921 (at 246,000 pieces) and the San Francisco issue of that date (at 548,000). Obviously something was going on around that time (a post-war recession), as the 1920 issues from all branch mints were struck in the millions – as was the 1923-S. No Walking Liberty half dollars were produced in 1922, and following a gap of three years (1924 through 1926), production resumed in the millions again at San Francisco in 1927.

At any rate, while the number of surviving coins dated 1921-D is considerably smaller, they did tend to come nice (nicer than other branch mints, anyway). Still, gems are rare, and so demand is strong for AU and XF coins as well. NGC reports only 15 pieces graded XF-40.

Auction archives for such a specific grade have to go back five years for the most recent record, to an example that sold for $1,762.50 USD in April 2015–though that was also given a Details grade. In February 2013, we see a coin with the Details designation that sold for $2,200. Two other Details-grade specimens sold in 2011 for around the same price as the 2015 example. And in February 2008, one finds a piece that sold for slightly over $2,000.

If you want to check GreatCollections for sales of the 1921-D Walking Liberty half-or any other coin, for that matter–be sure to check out the GreatCollections Auction Archives, with records for over 600,000 certified coins the company has sold over the past seven years.

At the time of writing, the high bid on the current example is $2,300 after one bid.

Liberty Walking half dollars, variously known as “Walkers” and Walking Liberty halves, were produced through 1947, replaced by John R. Sinnock’s Franklin design; Sinnock’s Roosevelt dime also replaced Weinman’s ‘Mercury’ dime. While often assembled as a complete set, some collect only the “short sets” of either 1934 through 1947, or 1941 through 1947.

On the reverse is a majestic standing eagle, wings partially uplifted, stands on a rock outcrop facing left, the right claw clutching a pine branch (showing both needles and cones) said to be symbolic of America. UNITED STATES OF AMERICA is placed near the flat rim above the eagle, and HALF DOLLAR is at the bottom. E PLURIBUS UNUM, UNUM on a separate line, is placed at the left-center just above the tips of the pine branch. Center dots separate adjacent words of the text phrases, with an additional dot following AMERICA. The designer’s initials AW, the A nested beneath the W, are at the bottom right, just to the right of the rocky perch. Liberty Walking half dollars minted at Denver in 1921 have the “D” mintmark located at the lower left, between the left of the edge of the rocky outcrop and the rim.

Proofs were minted from 1936 through 1942. The 1936 is the highest-priced issue, expensive to very expensive at all grades, followed by Cameo examples of various dates. The remaining Proofs are modestly priced through PR64 (PR66 for 1940s examples other than Cameo), though more expensive in finer condition.