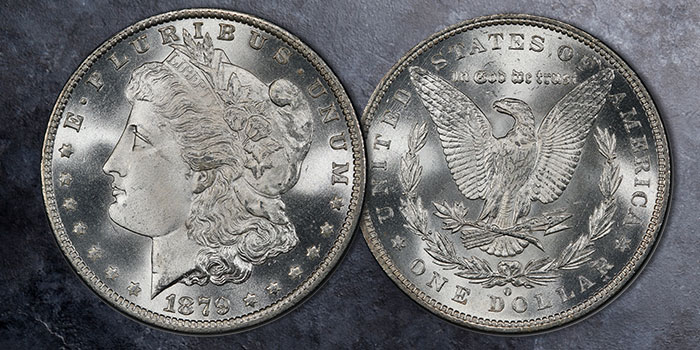 On Sunday, March 1, bidding ends on GreatCollections.com for this 1879-O Morgan silver dollar, graded MS-66+ by PCGS and approved by CAC

In only the second year of the series’ production, 1879 saw 2.887 million Morgans struck at New Orleans. But business strike silver dollars from the New Orleans Mint were weakly struck and don’t usually come nice. This ensures that when a top-pop example–PCGS has graded seven 1879-Os at 66+ with none higher–hits the market, it generates excitement among collectors of the perennially popular series.

If you want to check GreatCollections for sales of the 1879-O Morgan–or any other coin, for that matter–be sure to check out the GreatCollections Auction Archives, with records for over 600,000 certified coins the company has sold over the past seven years.

Always a popular coin with American collectors, the release of millions of Morgan dollars from Treasury Department vaults in the 1960s and ’70s radically reshaped what we knew about the condition and survival rates of these coins. And, as mentioned above, Morgan silver dollars struck in New Orleans tended to have a weak strike and see more wear than other branch mint coins. This was a fact through the entire run of the series – a fact that the Treasury’s GSA Hoard releases only reinforced.

The reverse is dominated by a heraldic eagle, influenced by Italian Renaissance designs, its wings spread across the upper half of the coin. Between the upper tips of the eagle’s wings appears the motto IN GOD WE TRUST. The eagle clutches an olive branch in its right claw representing peace and in its left claw are three arrows symbolizing the nation’s ability to defend itself. The central eagle design is partly encircled by a laurel wreath. The “O” mint mark is right beneath the ribbon that ties the two halves of the wreath together.