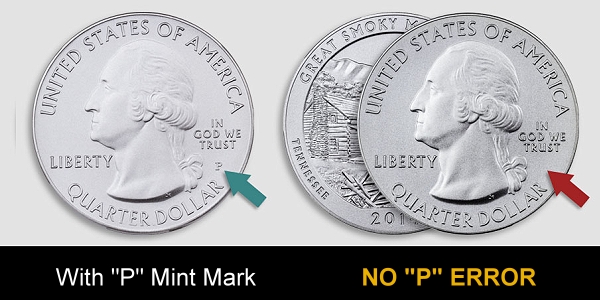 Issued since 2000, the America the Beautiful Quarters series honors America’s national parks, forests and other federally recognized sites. Each US state and territory gets one site recognized, and five sites are honored on quarters each year. Besides the quarters, the United States Mint also issues five-ounce silver America the Beautiful Quarters, which feature the same designs and 25-cent denomination. There are two versions of these five-ounce issues: a Mint State version, with a reflective finish and no mintmark, and a Specimen version with a “vapor-blasted” matte finish and a “P” mintmark. The Mint State versions are sold through US Mint Authorized Purchasers, while the Specimen versions are sold directly to consumers by the US Mint.

All of the coins had arrived at NGC in the standard US Mint packaging for the Specimen issues and the error was unnoticed until the first NGC grader examined the coins. A fifth example was discovered in a separate submission.

“It is exciting to find such a significant mint error several years after these coins were issued,” said David J. Camire, NGC Finalizer and mint error specialist. “This shows that you should always look closely at your coins, even special issues sold by the US Mint.”

Camire believes the error happened when coins intended to be sold as Mint State versions (and therefore without the “P” mintmark) were accidentally mixed with coins designated to be vapor-blasted, which happens after the coins are struck. The vapor-blasted, missing mintmark coins were then individually packaged along with the other Specimen issues and sold by the US Mint. It is not known how many of these errors were released, or if others await discovery.

The missing mintmark coins have been attributed as 2014 No “P” with the Mint Error designation on the NGC certification label.