Wow, November is here already. Where did the year go? A quick glance at the calendar reveals this is a full and important month on many fronts.

As I sit down to my desk on this rainy and cold morning, it is Election Day, and by week’s end, we will be observing Veterans Day. One hundred years ago, on the 11th hour of the 11th day of the 11th month in 1918, World War I, the war to end all wars, ended.

At the conclusion of the First World War, it was suggested by many in numismatic circles that a commemorative coin – a “Peace Dollar” or Victory coin – should be issued for general circulation to honor those who served. A whirlwind of positive public opinion ensued for this venture.

After much politicking, a commission was formed, and on July 28, 1921, President Warren G. Harding issued an executive order that designs for the proposed silver dollar coin be submitted to the Fine Arts Commission for their approval.

On November 19, a field of eight sculptors comprising many noted designers of current US coins (Victor David Brenner, Adolph Alexander Weinman, and Hermon MacNeil, to name three), were invited to produce designs. The participants were instructed to portray the head of Liberty on the obverse, to be made “as beautiful and full of character as possible.” 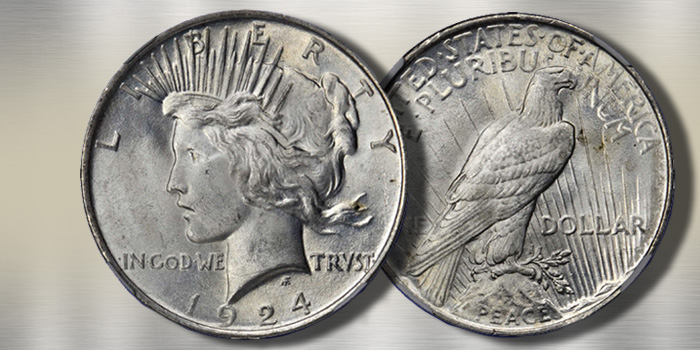 The winner of the contest would receive a $1,500 prize; all other competitors would receive $100 for their skilled efforts. Time was of the essence, and a December 13 deadline was imposed in order for the coins to be produced in the calendar year 1921.

After the deadline passed, US Mint Chief Engraver George T. Morgan prepared models of all the participant’s designs, to be judged by the panel. Ultimately, the youngest designer (at age 34) Anthony de Francisci’s now-iconic creation was selected as the winner. While Anthony’s only former claim to numismatic fame was as the designer of the 1920 Maine Centennial Half Dollar, his previous tutelage as student under both MacNeil and Weinman obviously served him very well in the Peace Dollar competition!

Now, with such short notice for the competition (less than four weeks), the talented immigrant from Italy did not have time to actually locate and hire a model for the Miss Liberty design. De Francisci instead looked to his lovely wife, Teresa, for inspiration and modeled the triumphant Miss Liberty after her. In essence, this is truly a story of the American spirit as both sculptor and model immigrated to America from Europe and became US citizens. De Francisci was born in Sicily, while his wife was born Teresa Cafarelli in Naples, Italy.

Around the time of the release of the coin, Teresa relayed in several interviews that when she was only five years old, her family emigrated to America, and as their steamer passed the Statue of Liberty on the way to Ellis Island, she was so fascinated by the enormous statue that she excitedly called her family over and struck a pose in imitation of the welcoming Miss Liberty.

Teresa later wrote to her brother Rocco: “You remember how I was always playing and posing as Liberty, and how brokenhearted I was when some other little girl was selected to play the role in the patriotic exercises in school? I thought of those days often while sitting as a model for Tony’s design, and now seeing myself as Miss Liberty on the new coin, it seems like the realization of my fondest childhood dream.”

The Treasury Department announced the new design on Dec. 19, 1921. Photographs of Mint Director Raymond Baker and de Francisci examining the final plaster model appeared in newspapers. At the time, the actual designs were not released to the press, as it was a practice of the Mint that only written descriptions were to be used. Needless to say, the public’s anticipation accelerated as they anxiously awaited the release of this new coin.

On December 28, the Philadelphia presses were, at last, producing the Peace Dollar. Finally, on January 3, 1922, the 1921-dated Peace Dollar was released into general circulation.

Although the Peace Dollar design was well-received by the public, the coin’s somewhat higher relief was a concern to some bankers and merchants, as it was thought stacking the coins evenly could be a minor problem. To remedy this concern, a modest retooling of the design from the “high relief” to the slightly modified one was incorporated on all 1922 issues through the series’ end in 1935.

A Coin for the Times

For many, the Peace Dollar is ripe with nostalgia. Its short lifespan (1921-1935) places it right smack in the middle of quite the change in the American climate. When I look at the coin, she conjures up memories of the innocence and fun of the “Roaring ’20s”, a trip through Prohibition, the stock market crash and FDR’s New Deal.

Perhaps appropriately and in tune with the times, many critics referred to the new design as a dramatic improvement, dropping the stoic Greek-influenced interpretation of its Morgan-designed predecessor and adopting a more streamlined “Flapper” style Miss Liberty.

I was thinking the silver dollar coin that was meant to celebrate and honor world peace 100 years ago should get some attention, and maybe the impetus for Coindexters everywhere to get involved.

For the average collector, this series is relatively easy to assemble. This is especially true in circulated grades, as there are no real “stoppers” for the budget-conscious.

For me, the Peace Dollar is especially attractive in Mint State. When buying uncirculated coins, it is wise to find examples exhibiting full satiny luster and a sharp strike. Unlike the predecessor Morgan design, Prooflike coins are virtually unheard of and Deep Proof-Like coins are nonexistent! Usually, coins MS 64 or better will fit nicely in even the most demanding collector’s cabinet. For those wanting to procure a few “type” coins, the common dates in the series include the 1922, 1923, 1924 and 1925 Philadelphia issues, and each is currently available for around $70 in MS 64.

In total, a mere 24 coins make up the entire set. This is one of the reasons for the Peace Dollar’s extreme popularity with collectors today. It is a series that can be assembled in relatively short order. Then, with a little patience, the full set can be upgraded as coins and funds allow.

So whether a high-end circulated grade or a Choice or Gem set is in your budget, either will certainly be a wonderful numismatic showpiece and investment. So for this Veterans Day, let’s all give Peace Dollars a chance!