The Renminbi was introduced in December 1948 by the nascent People’s Bank of China in order to facilitate commerce in areas controlled by the Communist forces during the Chinese Civil War. Less than a year later, Mao Zedong proclaimed the People’s Republic of China, which recently celebrated its 70th anniversary. Among the remaining notes are six specimens of the 1950 50,000 Yuan, the highest denomination of the First Series RMB (at the time, China’s financial system was afflicted by rapid inflation). 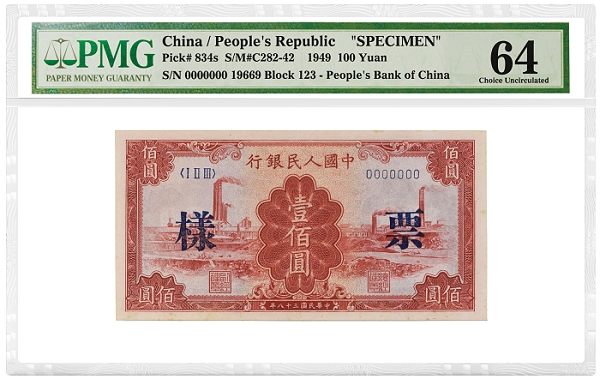 First Series RMB notes are treasured for their rarity, history, and iconography. These notes have varying designs, even within the same denomination, and often feature scenes of agriculture and industry. The DC Chio Collection is particularly significant due to its impressive scope.

By 1955, the First Series was withdrawn and replaced by the Second Series. Today, the Renminbi is in its Fifth Series.

Renowned numismatist DC Chio plans to display selections from his amazing collection at the Macau Numismatic Society (MNS) Annual Expo, which is being held from November 22-24, 2019, in Macau. Mr. Chio is president of the MNS and PMG is its Official Grading Service.

“I chose PMG to certify my collection because of its expertise, advanced holder and comprehensive guarantee,” says Mr. Chio. “I am also very pleased that PMG has created an online gallery to help other collectors appreciate and study these interesting notes.”

“PMG is honored to have certified this unparalleled collection of Chinese banknote specimens,” said Mark Salzberg, PMG Chairman. “We are also proud to host an online gallery of the collection, which offers collectors and researchers special insight into the currency of this pivotal period in Chinese history.”

Explore the PMG image gallery for the DC Chio Collection at PMGnotes.com/chio.

Founded in 2005, PMG is one of the world’s largest and most trusted third-party paper money grading services, with more than 4.5 million banknotes certified. PMG has strived to establish the industry’s highest standards of accuracy, consistency, and integrity. Every note that PMG certifies is backed by the comprehensive PMG guarantee of authenticity and grade, which gives buyers greater confidence. To learn more, visit PMGnotes.com.