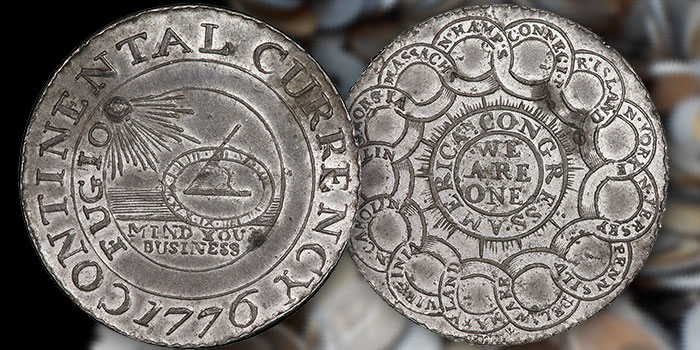 Grading in the Paris office for PCGS is always a thrill. The submissions in Europe always trend to yielding treasures not often seen. The last grading event in Paris left seasoned graders blown away with one of these discoveries. In a single coin submission sat a 1776 Continental Currency Dollar, a coin that is highly treasured and not often seen. What made this coin special was it was found in a junk box for 50 cents euro.

1776 Continental Dollars feature an obverse of three rings. The center ring design is a sundial, with the rays of the sun and text below the dial, “MIND YOUR BUSINESS”. The next ring features “FUGIO” and the sun. The last ring contains the text, “CONTINENTAL CURRENCY”. The reverse features a design of interlocking chain links around the border of the face, featuring the names of the 13 colonial states. The reverse design contains two rings, the center of two rings reads “WE ARE ONE” and the ring around the center ring reads “AMERICAN CONGRESS”. The coins have several varieties in the spelling, ornamental designs, or in metal compositions. While produced in a variety of metals, the coin was most often struck in pewter.

The intent of the Continental Dollar was originally believed to be pattern or circulation issue coinage for the continental United States to circulate alongside the banknotes that Congress had authorized and issued. However, in recent years others have argued that the coins were actually medals, made as satire by England – struck in pewter to mock the worthless value of the currency of the United States. While the origin of these pieces is still under debate, the 1776 Continental Dollars are important early coinage celebrating the birth of the brand-new nation of the United States. This iconic coin has been heavily counterfeited and many restrikes have been produced privately. Even these private restrikes have gained popularity due to the scarcity of original examples and are now being actively collected.

Given the rarity of any Continental Dollar and the high desirability for these pieces, as both historical artifacts and collectible coins, seeing an original genuine example is uncommon. What is even scarcer is finding a problem-free uncirculated example. The dollar received by PCGS was authenticated and graded MS62. It was only after certification that the story of its discovery was disclosed.

The owner, who wishes to remain anonymous, is from northern France. In an interview with staff from the PCGS Paris office, he disclosed that he bought the coin in June 2018 at a flea market. The seller had a cookie box full of coins and medals for sale and, while the buyer was looking through it, the seller pulled out another box of coins with this coin on top. The buyer unfamiliar with this piece asked a price, and the seller said 50 cents. The coin was purchased, and the new owner later Googled “Continental Currency” and “1776” to discover what he had. Believing he had found a treasure, he took it to a local coin dealer for authenticity, who was unsure and suggested he send it to the United States for authentication.

Searching the internet for genuine Continental Dollars, the owner noticed genuine examples were mostly in PCGS holders and that those sold for the most money. He also discovered that he did not have to export his coin to the United States but could easily get his coin authenticated at the convenient European PCGS office located in Paris. He sent the coin there for authentication and grading. The authenticity of the coin was confirmed, and the piece was graded. PCGS Coin Facts gives this coin a value of $97,500 in MS-62 representing a true treasure considering the coin cost the owner the equivalent of 56 cents plus grading fees.

One of the greatest joys in the hobby of numismatics is the thrill of the hunt – the hope of winning the numismatic lottery with one lucky discovery. For one lucky person in France, that dream did come true. Discoveries like this enchant the hobby and continue that dream of what is left in the wild yet to be discovered. PCGS is thrilled to help collectors obtain the full value of their treasures and be a part of this wonderful discovery.