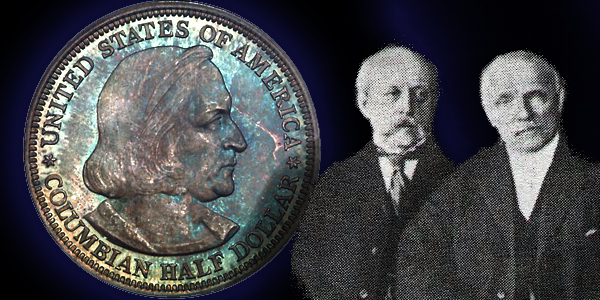 Coin designers extraordinaire and the sixth and seventh Chief Engravers of the United States Mint, respectively. Two British transplants of the same generation–Barber from London, Morgan from Birmingham–whose careers brought them together creating American coins.

Two men who rather famously did not get along yet together presided over one of the most productive periods in Mint history.

Coin collectors today are free to admire the work of both men without having to pick sides. Morgan dollars have been collectible forever it seems, and Barbers have seen an uptick in popularity in recent years. I certainly appreciate both but I have a special place in my heart for the times when these two giants worked together, sharing space on the same coin or medal.

Naturally, the first Barber/Morgan collaboration that comes to mind is the 1915 Panama-Pacific Exposition commemorative coin program. Barber and Morgan were responsible for the half dollar and quarter eagle in that set. The half dollar reverse looks like a mash-up of the Morgan dollar eagle and the Shield nickel’s shield, while the obverse has always reminded me of Weinman’s Liberty Walking design (an influence, perhaps, or do they share a common stylistic ancestor?).

The quarter eagle is more fanciful, with Columbia (not Liberty; same on the half dollar) riding a hippocampus while carrying a caduceus on the obverse, and a walking eagle on the reverse. 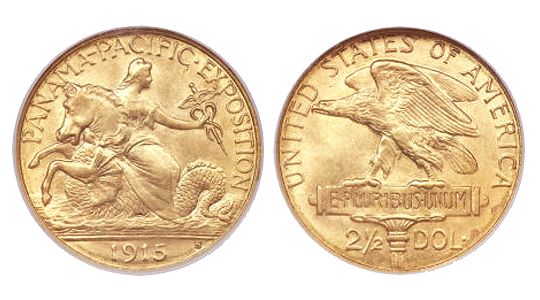 I love those coins.

But Morgan and Barber had worked together on another commemorative–the first commemorative, in fact–20 years earlier. That coin, the 1892 Columbian Expo commemorative half dollar… I don’t really know how I feel about it.

And that makes it interesting.

The first commemorative coin ever issued by the United States served two functions. It honored the 400th anniversary of the discovery of the New World by Christopher Columbus in 1492. It also helped fund the 1893 World’s Columbian Exposition in Chicago.

A federal commission had been established in 1890 to organize the expo, but Chicago elites had formed their own group to run things. Coal mining magnate and coin collector James Ellsworth was a member of the company, and was the major proponent for a commemorative coin to mark the occasion. The story goes that he had recently bought a painting by Lorenzo Lotto, a neglected Northern Italian Renaissance painter, that featured a “learned man” many presumed to be Columbus. Ellsworth liked his painting and thought its portrayal of the Genoese mariner would go great on a coin. He also didn’t think much of the recently released Barber coinage, and wanted the Columbian commemorative to do something different.

Which it most definitely would have, had the design been based on the Lotto painting.

Lorenzo Lotto, it should be noted, was a precursor of the Mannerists, a school of painting in reaction to Renaissance ideals of beauty and composition. Where Renaissance artists valued proportion, symmetry and balance, Mannerists employed distortion, asymmetry and tension. El Greco is probably the most famous painter to work in the style.

Ellsworth and company managed to convince Mint Director Edward O. Leech that a commemorative coin featuring Columbus would be worthwhile, sending him a photograph of Lotto’s painting for modeling purposes. So Leech discussed the portrait with Chief Engraver Barber, who told him that a coin with a (mostly) front-facing portrait was impossible.

Now if you remember my blog about Augustus Saint-Gaudens’ high-relief double eagle, Barber said much the same thing about that and worked vociferously to quash Saint-Gaudens’ design… which only turned out to be the most beautiful coin in history.

A visionary Barber was not. But he was Chief Engraver, and as such he was the man in charge of design. Working from a bust supplied by the company back in Chicago–and based on the Lotto painting–Barber drew a preliminary sketch of Columbus facing Left on the obverse and a globe on the reverse. It was sent to Ellsworth for review. Reception was uniformly negative, and I don’t blame them. I’ve seen middle school trapper keepers with better crafted doodles.

I’m tempted to say Barber phoned this one in, but take a look at the 1893 World’s Columbian Exposition Isabella quarter. Designed by Barber, Queen Isabella looks suspiciously like his first sketch of Columbus. Was he that attached to it?

Anyway, artist and sculptor Olin Levi Warner, Director of Decorations for the expo, was convinced by the Chicago group to also design the commemorative. He’d done a lot of design work for the fair already, including badges with portraits of Columbus based on the Lotto painting (Ellsworth was single-minded). His obverse was a version of his fair badge and featured Columbus facing Right, while his reverse featured a ship symbolizing (but not portraying?) Santa María, the largest of Columbus’ three ships in 1492. Underneath the vessel, Warner depicted the Eastern and Western Hemispheres.

Mint Director Barber saw many flaws with this proposal (of course he did). The design was reduced in size to accommodate the legally-mandated inscriptions and George T. Morgan was put to work improving the reverse (mainly adding detail based on photographs of the ship being displayed in Chicago).

After Barber made some final adjustments directly to the master die (traditional craftsmanship or control-freakery? You be the judge), the 1892 Columbian Expo commemorative half dollar was ready to go.

In November 1892, the first pieces were struck in Philadelphia. The very first coin had a planchet flaw and was rejected–or so history notes. Anthony Swiatek believes it’s quite possible that James Ellsworth and Philadelphia Mint Superintendent Oliver Bosbyshell came to an “agreement” concerning the first strike and that it really ended up in Ellsworth’s private collection. They argue that mint workers wouldn’t have made such a mistake for such a high profile coin.

(If Oliver Bosbyshell sounds familiar to you, that’s because the great gold heist of 1893 happened in Philadelphia on his watch. It might be circumstantial, but it still makes you go “hmmm…”.)

50,000 coins were shipped to Chicago for their grand unveiling. Famously, Remington Typewriter Company bought the “first” coin for $10,000 as a publicity stunt.

Much was made of the 100% premium on the coins. Also, and like much else Barber had a hand in, the media of the day liked to insult the artwork (and the low relief).

By the end of the expo, 4.6 million (out of five million) of the coins went unsold. Many were returned to the Mint and melted. A little over one million pieces had been impounded by the government until the exposition company paid the debt it was owed; they never did, so these coins were sold at face value. After this failed to drum up interest, the remaining coins entered circulation, where, apparently, they stayed until about 1950.

Thus began the tale of America’s first commemorative coin. It was also the first American coin to feature a historic person on it. That’s right! Columbus beat Lincoln and Washington to our coinage, followed immediately by a Spanish Queen.

And like I said, I don’t know what I think of it. Really.

I think the reverse is a worthy design. A bit stiff maybe, in light of future designs, but good for the era. I don’t hate the obverse per se, but I don’t enjoy it. The utilitarian aesthetic of Barber coinage is there (thick, clunky inscriptions in a tight circle around a densely-built profile portrait), but it almost looks like Barber was trying to fill the obverse a la Morgan’s Liberty as found on his silver dollar. When you tie off your design with chunky inscriptions like Barber did, you really shouldn’t try to make the portrait “expansive” in any way.