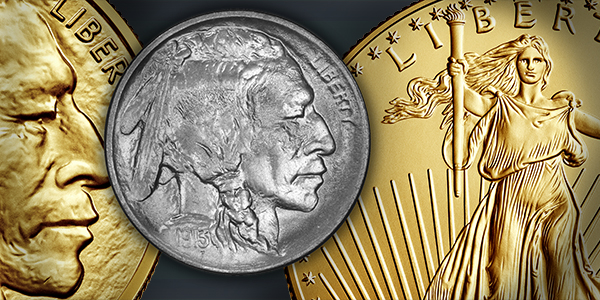 The United States Mint has really committed itself to the investment-grade bullion game in recent decades, producing and supporting a handful of very popular series, two of them being Gold Eagles and Gold Buffalos.

First released in 1913, James Earle Fraser’s design wasn’t the first candidate for the new nickel. Charles Barber had created patterns featuring George Washington, but when Mint Director Frank Leach was succeeded by Abram Andrew the new design was dropped because Andrew didn’t like how the Lincoln cent of 1909 had turned out. As a matter of fact, it was Andrew’s attempt to change the design of the cent that brought James Fraser on board.

Fraser’s work on the cent soon led to the creation of the Buffalo nickel.

And while not quite naturalistic, the new design approached our nation’s native peoples and fauna with an unprecedented realism. Not even Bela Lyon Pratt’s 1908 Indian Head quarter eagle and half eagle gold coins matched it. The obverse features an effigy of a Native American man, drawn from Fraser’s studies of at least two (if not more) individual Native Americans; by 1938, Fraser’s list of models included Big Tree (Kiowa), Two Moons (Cheyenne), and Iron Tail (Sioux).

Some continued to claim to be THE Indian on the nickel, but Fraser himself stated that his purpose “was not to make a portrait but a type.”

The identity of the bison on the reverse is more or less certain but there’s room for debate.

The Buffalo nickel ran from 1913 through 1938, when the Congressionally-mandated minimum 25 years before a coin’s design could be changed had passed. Excessive wear and tear on the dies required changes to be made to the design, and so the original (Type I) Buffalo nickel has the bison standing on a raised mound while the revised (Type II) reverse has him standing on flat ground.

The Gold American Buffalo–not to mention a 2001 commemorative silver dollar that also honored Fraser’s nickel–is an adaptation of the Type I design.

Authorized by a provision in the Presidential $1 Coin Act of 2005 (as were the multiple reverses honoring the 2009 bicentennial of Abraham Lincoln’s birth, by the way), the 2006 and 2007 American Buffalo bullion coins contain one ounce of .9999 fine, 24-karat gold. The United States Mint had never produced a gold coin of such purity for the public before. The Buffalo is legal tender, with a face value of $50. All of them are minted at the West Point branch mint, but only proofs have a “W” mint mark; regular bullion pieces do not.

Starting in 2008, the Mint also began production on half-ounce, quarter-ounce, and tenth-ounce gold coins of the same design. They have face values of $25, $10 and $5, respectively.

The Gold Eagle was authorized by the Gold Bullion Coin Act of 1985 and first released in 1986, the same year the first Silver American Eagles were sold to the public.

Four denominations of Gold Eagle were mandated by the legislation. The largest is a $50 face value coin consisting of one troy ounce of gold. The $25 face value coin has a half troy ounce. The $10 coin contains one quarter ounce, and the $5 Gold Eagle is a tenth of the weight of the $50 piece.

(Remember, like I mentioned in my blog about commemoratives, the face value of bullion coins such as these is symbolic and reflect the coins’ status as legal tender. The intrinsic value of bullion–especially gold–is obviously much higher.)

Specifications are as follows:

Other than the return to a 22-karat standard of purity, it’s pretty standard stuff. However, one provision states that the Mint must use only domestically-sourced gold, within one year to the month that the ore was extracted. If such domestic gold can’t be acquired at the “average world price”, then the Treasury Department may scour the reserves.

I didn’t know gold had a “use-by” date, but I like the “made in America” sentiment.

The Act also treats the coin’s design in an unusual way.

While the law says that the obverse must feature a representation of Liberty, it goes no further. So, in yet another nod to great coins of the past, the obverse design of the Gold American Eagle features a version of Augustus Saint-Gaudens’ classic Liberty from the $20 double eagle gold coin (1907-1933). She stands facing the viewer, an olive branch in one hand and a torch in the other. Behind her is the United States Capitol building; behind both of them is the rising sun.

All indicative of a bright new day for America as she brings light and peace to the world. A message that, no doubt, resonated with Americans during the Reagan years.

The law does tell the Mint what the reverse should look like, however.

Sculptor Miley Tucker-Frost (formerly Busiek) had recently finished a sculpture of a family of bald eagles when she heard Ronald Reagan’s speech at the 1980 Republican Convention accepting his party’s nomination for president. She was struck by a phrase he used–”Together, a new beginning”–and gave it as the title to her new work.

Word got around, and eventually the piece was chosen as the official commemorative art for Reagan’s inauguration. A version sat on President Reagan’s desk for both of his terms in office.

Once Ms. Tucker-Frost learned of the possibility of the U.S. issuing its own gold bullion coins, she met with several very receptive officials at the Mint and members of Congress, lobbying for an adaptation of her “New Beginning” sculpture to be used on the new coinage.

A description of her design was then written into the Gold Bullion Coin Act.

And maybe it was the zeitgeist, but the 1980s saw a renewed approach not only to the portrayal of eagles on American coinage, but also coin design in general. Was it, like much in the ‘80s, a reaction to the malaise of the ‘70s?

At any rate, both the Gold American Buffalo and Gold American Eagle bullion coins–judged solely as numismatic objects–are beautiful, masterful designs and worthy of the admiration they receive.

But does it matter?

The main reason most people are interested in bullion coins is as an investment vehicle, or hedge against inflation.

So I find myself wondering: does it matter what they look like? Could the U.S. (or anybody) issue gold and silver bullion coins with ugly, tacky designs and still have the coins be successful?

More generally put, is there a connection between the beauty of a coin and its value?

I think for most coins, the answer to the general question is yes. The value of most collectible coins starts at a baseline intrinsic value but increases as other factors contribute to the mix, with perhaps numerical and conditional rarity looming largest.

But what about artistic rarity? The great coins, the ones we all remember or that serve as some kind of Platonic ideal of coinage, are breathtaking. There’s a reason almost every numismatic advertisement features the Saint-Gaudens double eagle. Or if a dealer specializes in Ancients, the drachms of Syracuse.

Maybe it’s time that the hobby acknowledged “artistic rarity”: the idea that good design is hard to come by and adds real value to a coin.

Yet somehow, bullion is different. It seems that a modern coin’s beauty is taken for granted when it’s made out of silver or gold. Why is that?

Is it sticker shock? Do we go to purchase gold or other precious metals, knowing full well how valuable they are, and then balk if someone charges a premium based on rarity or beauty?

Is it demographics? Is the typical consumer for these coins somehow less of a collector?

Is it the cold, impersonal calculation of Wall Street? Do we abandon good taste so as not to appear too frivolous with our investments?

No doubt I’m making a mountain out of a molehill, but I hope you get my point. These are beautiful coins and can be enjoyed on their own terms, aside from how strong a showing they make in the market.