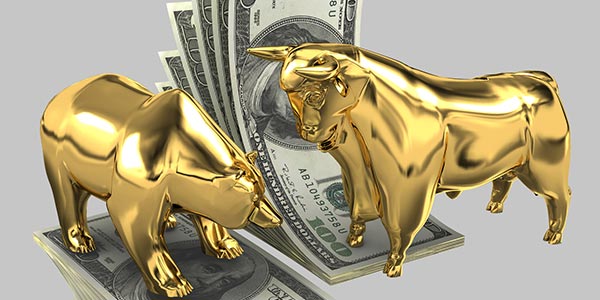 When gold rose from its 1,046 low last December, it was accompanied by motivating articles written by a plethora of excited gold analysts. Many of them unequivocally stated that gold’s long, grueling Bear Market had ended, and a new great Bull Market had begun. One after another, they fell over each other to make glowing predictions of a new, major rise in gold. They were so convincing that they generated what I believe became a self-fulfilling prophecy. Their excitement helped draw an enormous amount of money into the eternal metal and the stocks that explore for or produce it.

The result was a convincing Bear Market rally in the gold and silver complex, albeit temporary as is typical.

The ensuing seven-month 300+ advance attracted countless investors and speculators into these markets. After gold’s July peak of 1,375, the precious metals markets drifted lower. Finally, the market fell sharply, and the Bull Trap was complete. This coincided with the early November presidential election results. I suspect Donald Trump’s victory wasn’t the final incident that precipitated gold’s rapid decline, and trapped the bulls. However, that event caught many of the people who recently became believers. They already had substantial losses, and didn’t anticipate that more were to follow. They now held increasingly declining golden assets, instead of the hard-earned capital they earlier exchanged for them.

From the onset of this rally I didn’t feel it was indeed the beginning of a new gold Bull Market. Now, as then, I believe the earlier 1,046 low will be tested and likely broken. Timing is everything in the markets. Since the Bear has again emerged and taken control, he will continue driving the market to lower levels. The price decline will be punctuated by rallies, but he will not give up until the final low in his ongoing Bear Market is posted.

I believe it is approaching. But, it will likely entail further pain for gold’s investors, and greater carnage to gold, silver and their stocks, before this occurs.

Great secular Bull markets end with much enthusiasm at their peaks, while secular Bear Markets terminate when virtually all their riders regret the day they ever participated. I continue to believe the present gold Bear Market that began in 2011, at 1,920, remains in force. Yet, I feel the precious metals markets are set up for the final declines, that will accompany the end of this Bear Market. If I am correct, this will be followed by the birth of a new Bull Market that is likely destined to become gold’s greatest.

When the Bear Market finally notches its lowest point, it should be accompanied with much gloom on the part of gold investors. This is how Bear Markets end.

I suspect at least three to six months of punishing declines are in store for the precious metals markets before their Bear Market low points are posted. We will first see 1,046 tested and likely penetrated. Later, if I am correct the 1,000 zone will be tested, with a high probability of being similarly broken. The 850-875 area should generate enormous support if gold travels that far. I suspect that zone could represent the final low for the yellow metal. As always, I will do my best to view and listen to the markets with an open mind, and reevaluate my targets as the markets unfold.

On a positive note, I anticipate an incredible buying opportunity will present itself when the Bear finally takes his last breath. For those with the capital, courage and belief to make purchases at that time, this could represent a life-changing opportunity.

For those interested, you can read my original February, 2016 article to understand my reasoning when I wrote “Has Gold Entered a New Bull Market or a Bull Trap?”