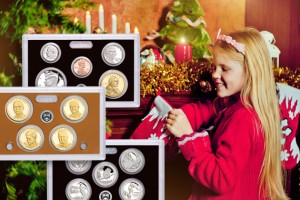 Proof Sets were the grand prize of all my holiday stocking loot!

Proof Sets are the Ultimate in Coin Art

From the time I was old enough to walk, I received U.S. Proof Sets and Mint Sets in my holiday stocking. Christmas morning, I’d reach my arm elbow-deep in my hand knit stocking, stretch my fingertips and grab hold of the last remaining item. The annual Proof Set was always the heaviest item, lodged down by the toe and hard to pull out. But when I did, I was rewarded with a spectacular prize – America’s coins all dressed up in their Sunday best.

With anticipation and glee, I’d hold the coins up to the light. The cent, nickel, dime and quarter would dazzle. I was captivated by the frosty images of America’s Presidential past. Especially, the large half dollar showing John F. Kennedy… growing up north of Boston, you learned to recognize his portrait first!

Santa truly knew how to impress. The Proof Set represented something special. Something to handle with care. Unlike the coins you’d seen in your mom’s change purse, these were magical. And just like the fancy china or holiday tchotchkes on the shelf, you were not allowed to play with them. It was explained that these were to remain inside their sealed packaging to be forever adored. This added to the mystical allure to a young child, but also the frustration. Just imagine the candy you could buy, if only you could release these coins from their nests! (See remorse story on right!)

My dad was very understanding and explained time and time again that they were collectible keepsakes – mementos of the year… something to be cherished.

Modern-day Proof Sets began in 1936, and were struck in Philadelphia. Sets included the cent, nickel, dime, quarter and half dollar and came in cardboard boxes. By 1952, transparent cellophane held the sets. The mint took a break from striking Proof Sets in 1965, ’66 and ’67 in favor of special Mint Sets. Proof Sets resumed minting in 1968, (the year I was born!), and production moved from Philly to San Francisco. Since then, regular-issue Proofs bear the “S” mint mark. The dollar coin was added in 1973 and continued until 1982, until it was no longer struck for circulation. Susie B. was added back in 1999, and then the Sacagawea dollar became part of the mix. That same year, Proof Sets began to contain 50 State quarters. Today, if you are lucky enough to get a 2015 Proof Set for the holiday, you’ll receive quite a grouping – 14 coins in three cases; the cent through half dollar, plus a Native American dollar, four Presidential dollars and five 2015 National Park quarters.

Do you collect Proof or Mint Sets, or give as gifts? What about your coin related holiday memories? Please share a story below!