Population reports, analyzed over a period of years, can tell you a lot about the future performance of a series. For modern coins like the Eisenhower dollar, whose vast and inexpensive raw coin reserves always allow for the possibility of massive population explosion, this type of periodic analysis is important. It can be your last line of defense when it comes to protecting your equity stake in your collection. It can also reveal population total “pressure points” that you can leverage when you’re in the market for a new acquisition.

Oftentimes when we look at modern series, we see trends that expose a great deal about the profit motive of the industry. When cheap, raw coins can be turned into valuable, graded coins, there are quick bursts of submissions (mostly in bulk) whose resulting coins flood the market. Those who prefer “classic” coins due to the perceived (and often real) scarcity of the issue point to this phenomenon as one of the reasons why they feel modern coins are “fool’s gold” or worse. 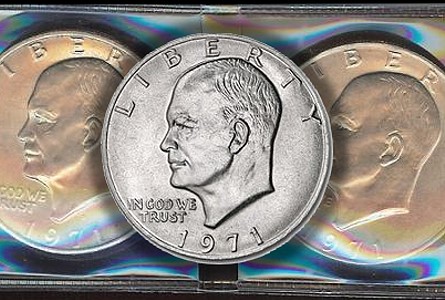 It’s true that population growth has devastated several modern issues, and will wipe out early price premiums on more recent releases. We discuss this in-depth with our coverage of the collapse of the 2001-S Sacagawea proof. This week, we look at several Eisenhower dollar issues to see what three years of population reports has to say about the series, which has been lagging in recent months. Are drops in price the result of too much new and unsold product, or the irrational whims of the market? Are we going to find ourselves swimming in gem Ikes, no longer perceived as scarce? Or are we reaching a point of real marketplace separation between grades deemed collectible and non-collectible?

Let’s check the numbers and see if we can figure it out.

Notice the MS-65 pops. While the market treats every issue differently, it’s instructive to look at the retail price of the 1973 Ike in MS-65, a coin that crossed the 1K population threshold in 2012. It has steadily declined in value to the point where it now routinely sells for $35-$40. PCGS’ price guide suggests $80, but that’s way off the mark in the current market.

However, the analogy stretches only so far. For starters, the ’73 is a mint set coin, which means that more mint state examples of it exist than for the ’71-P (bags and original rolls of ’71-Ps are none too common these days). Furthermore, the ’71-P is a low-relief coin. The ’73 mint set specimens may not be known for quality, but even a baggy ’73 is likely to look better than a dull, low-relief ’71-P.

The top pop for both issues is MS-66. The ’71-P is twice as scarce at this level. As the 1971-P inches ever-so-slowly towards 50 examples in MS-66, expect the real-world price to come down. It will probably remain a four-figure coin for a while longer, but a more reasonable price relative to the number of high-end buyers is around $2,000.

But what’s going to happen to the MS-65? Clearly, the market is softening, and we’ve seen more than a few sell for less than you’d expect. The problem here is easy to understand – the market no longer considers the 1971-P in MS-65 to be a $150-$200 coin. If the value drops to $70 or $80 – a distinct possibility – what will that mean for the companies who submit in bulk? Will they continue to send them in when they have a failure rate of over 90%?

What’s bound to happen is that submissions will level off… and soon. Collectors with a good eye for quality can help themselves by turning the best MS-65 quality coins into MS-65+ pieces. The potential market for these pieces (especially nicely-toned ones) is huge. We believe the right 65+ 71-P could sell for $600-$1,000.

The 1971-D was heavily submitted to PCGS in 2010. In 2011, the stream of submissions slowed to a trickle. Then, in 2012, there was a tidal wave of new submissions, adding more than a thousand coins to PCGS’s population report. The big gainer was MS-65, with an increase of more than 800 coins. 86 coins were added to the rolls of MS-66, while only one coin made the top pop grade of MS-67.

If you’re not totally familiar with the Eisenhower dollar, let me explain the 1971-D. More than any other issue*, the 1971-D can be found in abundance in MS-65 and MS-66. One collector we know pulled nearly 30 MS-66’s out of an open bag he purchased from a southwestern coin shop. After looking at just a few coins, he decided to buy the entire bag. You can tell when a bag is going to be great or not-so-great by looking at only a few coins. Great coins tend to congregate, and dogs roam in packs.

It’s no surprise that dealers would look to the 1971-D as a way to get gem certified Ike dollars. PCGS’s price of $150 is overly optimistic. As a population approaches the magic number of 1,000, prices drop to below $100. A typical example will sell for around $90 to $100. The right coin could sell for more, depending on eye-appeal, color, or the presence of a Peg Leg or other interesting feature.

PCGS continues to be tight with their MS-67s. Between 2011 and 2012, only one new specimen made it. I know of one piece at this grade being offered to the public; the other fifteen are in private collections.

But that’s almost to be expected. What we didn’t expect is how well the 1971-D has held up in MS-65. Again, PCGS is a little optimistic in terms of value, since the coin has been selling for $40 for the better part of the last year. With a population of over 3,000 certified coins, and untold thousands of uncertified pieces out there that could very well earn the grade, you’d think that collectors would be reluctant to pay so much for the coin. Yet the attractiveness of the issue, coupled with the historical significance of the MS-65 grade plus the convenience of having it certified and encapsulated, provides enough value for collectors to accept the premium.

We’ll take a risk on stating the obvious, but an inverse relationship seems to exist between populations and coin values for modern coins in common uncirculated grades. Populations go up, and the premiums associated with certified coinage go down. Eventually, the market will reach a point where certified modern coins and their raw counterparts trade for roughly the same price, with perhaps the slightest premiums going to the certified coin due to ease of trade and established market acceptance. In other words, exactly what third party certification is supposed to do, the difference being market maturity.

Something like this has happened over the past year with the 1976-P Type 1 in MS-64. With Type 1s coming from mint sets and most grading at MS-63 or below, we see a bottleneck of certified coins grading MS-64. Even before the coin dropped to $6 from $35 in PCGS’ price guide, MS-64 was never the desired outcome. Instead, all of these MS-64’s were failed attempts to earn an MS-65. In the past year, only one specimen made it.

So why the price decline on the MS-65? We chalk this up to the caprice of the market. Maybe more 1976-P Type 1s have entered the market in the past year compared to recent activity. Maybe the MS-65s weren’t particularly attractive. This issue tends to come two ways: ugly and uglier. Ugly coins, despite their technical merits, always inspire less enthusiasm than beautiful coins in the same grade. Or maybe the market is correcting itself and the series as a whole is cooling off. If that’s the case, and there are fewer than 481 collectors (the combined populations of MS-65 and MS-66) collecting the series, then we’d be surprised. This isn’t exactly a dealer stock coin, unless you’re someone who specializes in the series, like James Sego of JMS Coins out of Naperville, Illinois.

If the rest of the series follows suit with what PCGS thinks is going on with the 1976-P Type 1, then the tide of new submissions will subside. Dealers will have to look at the odds and the bottom line before they jump back into the game. And things being what they are, we imagine that they’d rather look for more lucrative opportunities. Series specialists will continue to submit coins they think are quality, to varying degrees of success. Perhaps a few higher-end coins will get made in these tougher dates, but the likelihood of a surge of heretofore unknown high-end coins is not great.

In the short term, we foresee a bear market for the Ike dollar in general but especially on the low end of the mint state spectrum. Top pop coins that aren’t accounted for in collections will have to wait for the right buyer – even if that buyer is offering less than historical money. Most of the quality top pop product is accounted for and in serious collections. Whatever is left for sale has been picked over by the major players, who by definition have turned it down. That should tell you everything you need to know about that.

For the top pop minus one collector (someone who buys the coin right below the top population coin for a given issue), we see an opportunity to use PCGS’ new grade+ system as a hedge against any future downward slide in price. Collectors who turn their MS-66 coins into MS-66+ will make money, while those who jump in and buy MS-66+ coin at prices bridging the gap between 66 and 67 stand to lose as plus grade populations rise. The key is to know the series, do the legwork, and upgrade the coins yourself. Soon, plus-graded coins a half step down from the top will be top pop minus one coins – and this is where all of the money will be made in Ike dollars in the near term.

The idea that Americans are apathetic about circulating the cent is hardly a new one. According to Treasury Department estimates, cent hoarding was so bad in the 1970s that 30 billion of the 70 billion cents minted since 1959 had been removed from circulation.[1] They were so desperate to change the behavior of Americans regarding the small copper coin that they launched a program in 1974 to reward individuals and groups for returning $25 or more in pennies to participating banks.

In December, Kevin Foley reported that the Central States Convention has banned the sale of Liberty Dollars. The legal status of these controversial items notwithstanding, we at the Morgan Walker Numismatic Institute™ think that the time will come when the very homely von Nothaus creations will take their rightful place alongside the likes of Referendum Dollars and Feuchtwanger tokens.