As we cope with an uncertain future regarding the health, social and economic crisis the world is currently facing, it may be difficult for some collectors to know what to expect in the coin market.

The best indicator we have in deciding how to deal with the current crisis, numismatically, is to look back at how the coin market performed during the financial crisis that took place a decade ago. During that time, I transitioned from running the largest and most-used price guide at the time – Coin World’s Coin Values (when it was a stand-alone national newsstand magazine) – back to buying and selling coins, prior to launching CAC Market Values four years ago.

My comments here are anecdotal in nature but are derived from real-world experience in the U.S. coin market from the two different perspectives I just mentioned.

Economically speaking, the two crises differ in that the financial crisis of a decade ago was just that – a financial and banking crisis, whereas the current crisis is a health pandemic that struck the world with a strong American economy and strong financial institutions here in the U.S. During the financial crisis a decade ago, prices for high-end rare coins fell by about 20 percent or a little more over the course of several months.

Many collectors, who seemed to have money, just stopped buying and held on to their cash. But the price drop offered a tremendous buying opportunity for collectors and dealers who took the plunge because during the next five years (2010 to 2014) the tremendous economic stimulus injected into the financial system propelled prices for high-end rare coins much higher than the correction they experienced during the 2008 to 2009 period.

And that’s exactly what seasoned coin traders are expecting this time around. As you know, we’ve already seen Congress begin to inject a $2 trillion stimulus into the U.S. economy. And there’s a lot of talk from our leaders in Washington that more needs to be done to keep our economy from actually falling into a “depression”. That talk, plus looking back at how Washington and Wall Street steered the economy away from the brink a decade ago should give us confidence that they’ll pull off a similar economic rescue this time around.

But the rescue will come at a cost of piling more federal debt on our backs and turning on the printing presses, so to speak. Traders are confident that this stimulus will drive gold prices to new record high prices, just like the stimulus did a decade ago. Back then, the price of gold climbed from the $700 USD level in September 2007 to the $1,900 level in September 2011 – a new record high. Along the way, gold made news by crossing the magical $1,000/ounce mark during March 2008 – a year that brought volatile gold prices.

Not only did the market for high-end coins follow closely on the heels of gold during that time, but rare coin prices continued to appreciate for another three years after the gold price began softening from its 2011 peak. Importantly, the coins that appreciated were carefully selected scarce-to-rare coins in high grades – the kinds of coins that receive CAC approval. More common coins – even in high grades – that are substandard in condition or are very common did not experience the price appreciation experienced by CAC coins. When selecting coins to purchase, it’s wise to keep in mind that coins that are so common in which multiple examples can be found on the market in the same grade at any given time are not likely to have the same potential for appreciation as well-selected scarce-to-rare coins.

The bottom line is that rare coin prices typically follow a bull market in gold. While gold prices have not begun to soar yet, that move is expected by numerous financial experts. In contrast to stocks, which have precipitously fallen in value recently, gold has seen a slight softening in price, but has firmly held a level of support. Gold experts state that’s because people have been selling gold for its liquidity to cover losing positions and margin calls in other investments. When that shake out is over, those experts expect gold’s price to begin climbing.

According to a feature story in The Wall Street Journal at the end of March, a shortage of physical gold products is shaping up: “As the coronavirus pandemic takes hold, investors and bankers are encountering severe shortages of gold bars and coins. Dealers are sold out or closed for the duration … It’s getting so bad that Wall Street bankers are asking Canada for help. The Royal Canadian Mint has been swamped with requests to ramp up production of gold bars that could be taken down to New York … The mint has received ‘unprecedented levels of demand,’ largely from U.S. banks and brokers.”

Demand for rare coins accelerates from buyers of precious metals who are introduced to rare coins at coin shops, coin shows and online, and from investors who are looking for safe-haven alternatives to equities.

While rare coin auction firms have had to move their floor auctions from convention sites to their home offices or even change auction dates, the market for CAC coins is holding up very well. Demand for high-end coins from seasoned buyers is strong.

Stack’s Bowers Galleries was the first company that had to move its spring Baltimore auction to its west coast offices.

Legend Rare Coin Auctions (LRCA) was next, having to move its March 26 sale from Philadelphia to New Jersey.

The April Central States Numismatic Society convention was cancelled, forcing Heritage Auctions to hold its convention sale in Dallas, and GreatCollections extended some of its sales by 14 days.

Bidding online with these companies is efficient, but many buyers who like to examine auction coins in person are hampered. This is where confidence in CAC-approved coins is helpful.

According to the firm:

“Against a backdrop of economic uncertainty and negative indicators, rare coins continued to shine at the Stack’s Bowers Galleries March 2020 Auction in California. Nearly three years after Part V of the D. Brent Pogue Collection hit the market, the most valuable coin collection ever sold cemented its grip on the record books with more than $15 million in additional sales in tonight’s session. To date, the Pogue Collection has realized $122,012,480 for the coins and $131,298,560 total, including the paper money collection sold on March 19. With most bidders participating online, the 420 lots realized 104% of their presale high estimates, which were determined well before recent economic difficulties.” 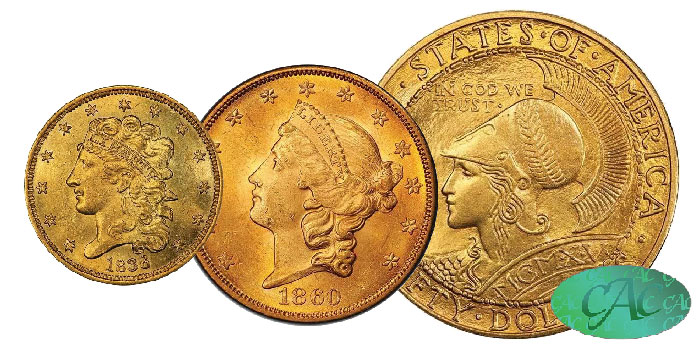 Here’s what the firm experienced:

“Going into Thursday’s close, we had the highest amount of new bidders we’ve seen since the early days of LRCA (when almost all registrants were new registrants). As 5:30 pm approached, we began the live portion of the sale. Immediately the number of live bidders jumped to a level much higher than normal for the first lot of a sale. This proved to be an omen, as we had consistently high views throughout the sale, with most bidders watching to the very end of the auction, even after their preferred series had crossed the block. These bidders weren’t just watching either, as we had hundreds of thousands of dollars in bids come through during the live auction, leading to strong prices throughout.”

Here’s Legend’s take on the state of the rare coin market:

“The real highlight for us was how our consignors and customers came together to help make this auction a success. If our performance and interactions this month are representative of the entire coin-collecting community, then it’s clear that this hobby of ours will be able to not only survive, but thrive as we make our way out of this pandemic.”

I participated in both firm’s auctions and watched them closely. My guess is that some bidders took part because they thought coins might sell cheap, based on the crashing stock market and economic turmoil. In truth, the auctions by both firms demonstrated the overall strength of demand from active collectors who have made collecting coins part of their long-term lifestyles.

In 1997 he was recruited to manage the Coin World Trends price guide on an interim basis and in 2002 he was recruited again as market analyst before the name was changed to Coin Values, which became a national newsstand magazine – the largest and most followed price guide for U.S. coins at the time.

In 2016, Mark launched CAC Market Values – an independent price guide for CAC coins. He built the guide with original market research for each value listed. The price guide is unique in that it publishes high/low market value ranges for CAC coins, a quick reference guide that provides negotiating spreads and bidding parameters for auctions.

Mark is an expert in 1804-dated silver dollars. In 2014, he wrote and published the well-received book, The Dollar of 1804 – The U.S. Mint’s Hidden Secret. Mark continues to advise collector-investors about planning, building, appraising and selling collections of high-end U.S. coins.