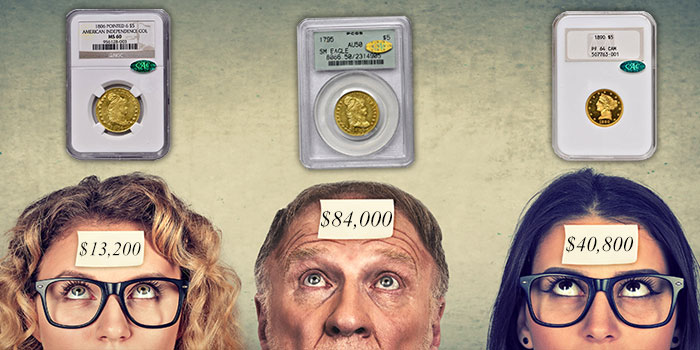 By Mark Ferguson for CoinWeek on the Rare Coin Market – MFrarecoins.com ……

If you collect CAC coins, you’re in good company and your ranks are growing. This is mostly good news if you own CAC coins and plan to purchase more. It means price support and liquidity are strengthening even more, as is their potential for price appreciation. These are not just my observations, they’re backed up by top dealers from around the country who handle a large number of CAC-stickered coins.

I’m a professional numismatist who publishes CAC Market Values, an independent price guide for CAC coins, and I regularly speak with top collectors and dealers from around the country about CAC coins and the market for them. Public awareness of PCGS- and NGC-graded coins has been top-of-mind for more than a generation, and now dealers have been telling me that even new collectors have an awareness of CAC-approved coins and are requesting CAC-stickered coins from the get-go.

The CAC endorsement gives these new collectors comfort in knowing that the grades of the coins they own have been endorsed by, not one, but two third-party services: PCGS or NGC and CAC. While these collectors may understand the basics of the 70-point coin grading scale, they lack the long-term experience it takes to be able to discern subtle differences between a one-point difference in grades. After all, a one-point advance in grade often means thousands of dollars more in price.

Overcome the Scarcity of CAC Coins Using This Simple Shift

While this growing demand for CAC coins is a welcome trend, there’s also a downside. Many CAC coin issues are scarce, or even truly rare! Take a good look at the CAC Population Report for the coins you collect. Assuming there are far fewer “crack-outs” of CAC-stickered coins than there are of non-stickered PCGS and NGC coins, the CAC Pop Report should reflect accurate tallies.

If you’re a Registry collector, you can see the challenge in front of you. A high number of low-pop and top-pop CAC coins are tied up in existing Registry sets, so those coins will only come available when the sets are broken up and sold off. Still, waiting for some of those sets to come back on the market is often fruitless because many Registry sets are sold intact to new collector-investors.

But here’s what one top award-winning PCGS Set Registry collector told me last fall when I interviewed “Mr. Perfection”, who built the “Perfection Collection”. He’s a long-time CAC Market Values subscriber who’s very passionate and experienced in negotiating the headwinds and high waters of Registry collecting at the top echelon. He was finding it very tough to acquire some of the top-of-the-pop coins he needed for his Registry sets – the coins were already tied up in other Registry collections.

But once he realized that if he shifted his focus from set building by date and mintmark, or just a date set, to building a “type set” (one example each of the various denominations and design types), the world opened up to him! He was no longer limited to searching for top examples of specific dates and mintmarks; he could now choose from top examples of a wide variety of coin issues that are on the market at any given time. That collecting-investing strategy has been echoed by many dealers, as well. For example, Legend Numismatics has been advocating in their blogs for years that collecting by “type” offers collectors a wide range of coins to choose from, compared to set building. The firm has been a long-term advocate of CAC coins and is well-known for specializing in them.

But, of course, they’re not alone. Companies like Witter Coin of San Francisco primarily offer CAC-stickered coins at major shows around the country; and they compete to buy CAC coins by bidding on them on the dealer-to-dealer trading networks, such as Certified Coin Exchange (CCE).

As Seth Chandler, owner of Witter Coin, recently told me:

“There are clearly more people approaching us to inquire about CAC-approved coins. I think what is more surprising than anything, is that there are now more [new] collectors seeking CAC coins. A lot of these folks collected as children, and are now circling back, decades later, to build the set they’ve always wanted, like Morgans, gold type, or whatever it may be, just as long as the coins are CAC-approved. Nicer coins, generally speaking, are worth more than ever before, and newer collectors understand the significant financial commitment and wish to have as many safeguards in place, as possible, to assist them in their journey. Success for them means seeking out knowledge, working with a knowledgeable dealer, and sticking with PCGS- and NGC-certified coins… and, more lately, requesting CAC-approved coins.”

A similar sentiment was shared by a major wholesale dealer who recently confided in me that for about the last year and a half or so they’ve been having an increasingly difficult time selling non-CAC coins.

Another dealer, part facetiously and part seriously, said this to me: “I don’t like CAC coins!” When I asked why, he said, “Because once collectors buy CAC coins, that’s all they want.” The problem this dealer was expressing was that specific CAC-approved coins are often very difficult to find.

Besides dealing with scarcity for many coin issues that are approved by CAC, finding sales data to compare to asking prices for CAC coins – so you know you’re getting a fair deal – is often more of a challenge than finding the coins themselves. Here’s an example of a series I was recently researching: Proof CAC Morgan dollars.

According to the Red Book, the 1880 proof Morgan has the highest mintage of them all, at 1,355. Including the cameos and deep- or ultra-cameos, PCGS has graded 541 and NGC has graded 429, for a total of 970 proof 1880 Morgans graded between the two services. But of course, those tallies can only serve as guidance, because an unknown number of “crack-outs” and “cross-overs” have reduced those respective totals. Less likely to be cracked out are CAC-approved examples, of which just 80 proof 1880 Morgan dollars have been stickered: 33 proofs, 46 cameo proofs, and one deep-cameo proof. But if you want one of the highest-graded CAC-approved 1880 Morgan dollars, there are only seven to choose from in Proof 68 and 13 in Proof 67 – for both proofs and cameo proofs. That’s just 20 coins. And when you finally find one of those 20 coins for sale, how do you value it?

Just two sales of Proof CAC 1880 Morgan dollars in each of these two grades have taken place at a major auction since CAC began stickering coins in 2007. Presumably, many more sales of these coins have taken place in private transactions (look for future articles and I’ll give you some tips on how to value low-population CAC coins).

See how challenging it can be to build a top-grade set of CAC coins? Now, if you shift your focus to building a “type set” that includes just one high-grade Proof CAC Morgan dollar of any date, you’ll have 59 Proof 68 examples and 129 Proof 67 examples to choose from – in proof and cameo proof (when they come to market). Plus, there are 13 Proof 68s and 27 Proof 67s in deep or ultra-cameo that have been given the CAC seal of approval. This is an excellent example of how your opportunities open up by building a “type set” instead of collecting a single series by date and mintmark.

Mark Ferguson is a professional numismatist and publisher of CAC Market Values, an independent price guide for CAC coins, and Rare Coin Strategies, a newsletter that provides expert guidance for building a successful collection-investment.