Sadly NO! While I thought we were making progress with coin doctors, we only slowed them temporarily. I have concluded the public is so addicted and really wants their coins so bad, they tend to be in denial. I’ve watched countless auctions where if the price seems cheaper and its a coin needed for a set, so be it-the coin doc gets a reward.

Please use an agent to bid- a qualified agent who can grade. Or, just skip the coin. I see many people still buying bad coins. If they need to sell fast, then they will learn their mistake. 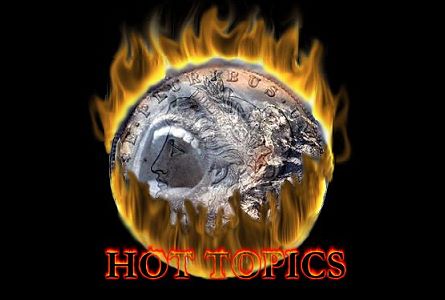 We MUST still keep the pressure up. Most retail dealers are just too lazy or greedy to care. As I have said before, ask why they do not have the majority of their coins w/CAC beans (we just saw one brag they put up 60 NEWPS-only 2 were CAC). I know too many genuises may disagree with some of CAC’s grading (because the dealers making negative comments can’t grade) but JA and his team are spot on at finding and rejecting doctored coins. Its a tool-a tool that really works, why not use it? I know of only ONE other retail dealer (besides Legend) who is that good who I’d buy non CAC coins from (we’re talking Legend calibre coins).

There was a horrible thread on the PCGS chatroom Saturday 1/4 (Stella and the not so silly putty) started by a dealer who obviously wanted to brag about a deal they had done. It involved a $4 PCGS Stella that even they bragged was clearly puttied (they showed clear images). They bragged how they bought it then sold it. This is the poor “attitude” I have been talking about for the past few years. Especially since this individual is a PNG member who cried to assist in helping the team that formed the PNG defintion of coin doctoring. He sold it, took the profit, and tried to brag about it by acting like he was sharing an educational fact (NOT). His pathetic defense-the value would not have changed, he changed his tune that all of the sudden the coin was not his, yada, yada. I dunno, I would have sent the coin off to PCGS immediately-or discussed with the owner the issues. Its about right and wrong and doing something about it. This guys boss owns a big firm, they can afford to pass up a $5G profit for doing the right thing. Instead this genuis has spent time on the thread searching for the best way to spin himself out of his own mess by pretty much being in denial or trying to creat a different direction for the problem.

Wasn’t any one from the mighty PNG reading this thread? Is this the quality standard of a PNG Dealer today? Guess so because there is a PNG member who just now started a new thread about joining PNG-why people should. Guess he does nto want to read this thread? This punk who originated this thread was just bragging how he thinks he is upcoming talent. Really? What will he grow up to be other then an accomplace to the coin docs talent? I heard he emailed someone and asked them to buy the coin and send it to PCGS because they put his feet to the fire. WOW-WHAT A LOSER. Love those PNG guys!!!!

In 2014 the public MUST step up and not only “out ” losers like this but turn their heads away from them. Yet again, this poor attitude goes right back to the PNG and its lax rules and “not our members” attitude. Where the hell are their members ethics? Especially from one who helped write the doctoring defintion? This culture MUST change. I will never join the PNG because of crap like this. Apparently that group does not care about collectors in the end.

As far as I am concerned, EVERY retail oriented dealer SHOULD do some policing. That coin should have been sent to PCGS. NO EXCUSES. Putty is a form of coin doctoring. The dealer who did the work should be identified and punished if possible. Then have the crud removed, and the coin be placed in its proper holder. I do not hesitate to call Hall or JA when I see bad coins-especially in auctions. And, Legend has even eaten a few dollars buying bad coin or two. I’m not being any hero, its called doing what is right. I do not post on line when I do that, I do not need any glory-I just care about collectors.

I have enough issues with the ANA that will have me side tracked, but this reignited me on the PNG and all its splended BS. If the PNG has ANY ehtics what so ever, they will disipline this wise guy and teach or remind ALL of its dealers that doctoring is wrong and if you see any-report it. Hey, I am stating in print-there is a problem with a Stella-and there is even a well documented record of it being puttied and being knowingly sold by a PNG member. Of course the PNG brass will probably growl at me at FUN and then say “but no one reported a problem”. What worhtless cowards. Take a stand-show the collectors you do care-I dare you! At the very least, the PNG should appologize to all collectors for what this member did (did not do)-especially if they believe it was not of the standards of its members. Oh wait, the guy has now posted the PNG code of ethics on a thread about this Hot Topics…What a JOKE-this kid needs to look in the mirrors are see who HE really is. I guess those written words are supposed to make the PNG so noble? Lets see what they do with this PUBLIC complaint.

All I can do is keep pushing the guys at the top. Collectors PLEASE take harder stand. Do not buy a coin that has possibly been messed with. Get a second opinion. Ask questions. Know who you are dealing with. Keep writing and talking to other collecters. Tell the grading services if you see bad coins. I’d love to see massive written campaign to the PNG demanding they shape up. I promise if I ever can wake up the ANA I will create a Bill of Consumer Rights. Coin docs and wise guys won’t have a chance.

When pathetic threads appear (like the Stella thread) be vocal and show your unity. I was dismayed that another dealer (who also wants to make a name for himself) thought he looked so wise by defending the thread while a few loserrs commented why should anyone police the hobby? Do not let a minority like that make stupid comments. That was a great place for the public to make a statement. The bad guys can even a few PNG members can read!

If you have any comments, please feel free to email me at: [email protected]

FOLKS I’LL BE A BETTER PROOF READER WHEN PROBLEMS LIKE THIS DO NOT EXIST AND I CAN WRITE SLOWLY AND CALMLY! SORRY, I AM NOT A WALL FLOWER. I CALL IT LIKE I SEE IT. YEAH, I AM THAT ANGRY ABOUT THESE SUBJECTS!