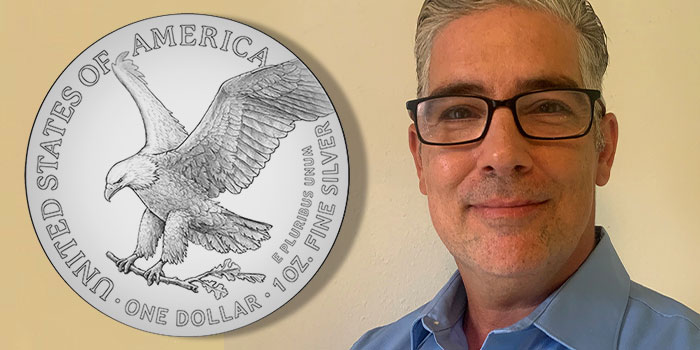 To mark the 35th anniversary of the flagship bullion coins of the United States, the United States Mint is updating the reverse of the Silver Eagle in 2021 as well as that of its companion coin, the American Gold Eagle. This is the first major design change to the American Eagles since the coins were introduced in 1986. Incredibly, both the original reverse and the new reverse will be issued in 2021 — another first for collectors.

In contrast to the iconic Heraldic Eagle reverse created by Mercanti, the new Silver Eagle reverse design features a dynamic image of a naturalistic bald eagle. Gripping an oak branch — a symbol of strength and endurance — the eagle is coming in for a landing with its powerful wings spread wide.

Likewise, the inscriptions that wrap around the perimeter of the design are presented in a bold, modern style. E PLURIBUS UNUM, the national motto, is enlarged and moved above the coin’s weight, rather than in a ribbon as in the original design.

The new Silver Eagle reverse is not the only significant release for Gaudioso in 2021. It was recently announced that he is the engraver of the new Washington Crossing the Delaware Quarter reverse design, which will be introduced into circulation this year.

In addition to the new American Silver Eagle reverse and Quarter reverse, Gaudioso has executed the sculpts required to produce more than 35 coins and medals. Among these are the 2020 American Eagle Platinum Proof Coin Program, the 2019 American Liberty High Relief Gold Coin and Silver Medal, and several America the Beautiful Quarters.

Prior to joining the US Mint’s sculpting-engraving department, Gaudioso worked as a master painter and designer for America’s oldest and largest glass studio, Willet Hauser. He earned his Master of Fine Arts degree from the New York Academy Graduate School of Figurative Art in New York City.

“To be part of the American Silver Eagle’s legacy is a career-defining honor,” said Gaudioso. “I am pleased to extend that honor to signing NGC certification labels.”

“Since its inception, the NGC Authentic Hand-Signed Labels program has drawn the most esteemed and prolific numismatic artists,” said Mark Salzberg, NGC Chairman and Grading Finalizer. “We are proud to add Michael Gaudioso to our roster and to be able to offer collectors signatures from the engravers of both the original and the new Silver Eagle reverse.”

American Silver Eagles certified with the NGC Michael Gaudioso Signature Labels will be made available through select retailers. To learn more about the NGC Authentic Hand-Signed Labels program and its many significant signers, visit NGCcoin.com/signaturelabels.

With more than 11 million Silver Eagles and more than 1.6 million Gold Eagles graded, NGC is the unrivaled leader in American Eagle certification. As the 2021 Eagles are released, NGC will offer many exciting ways to highlight both the original and new Eagles. Learn more at NGCcoin.com/2021-american-eagles.