I’m often asked “Ron, Can you tell me about Grading Coins ?”

Yet an informed and honest answer to this question has to take into account a range of technical components and contextual considerations.

Frankly, I’m not sure that anybody has answered it satisfactorily.

That’s why there are so few professional coin graders that big dollar collectors trust, and why the few that exist get paid hundreds of thousands of dollars a year to squint at tiny metal discs.

Of course, you could look to the various coin grading books for help.

There are a couple of slickly produced books that most collectors know (they usually feature high quality photographs). Still, it’s not so easy to learn how to grade a coin from a photograph; there’s just no substitute for actually holding a coin in your hand.

I mean sure, you’ll learn how many grains of wheat are necessary to have a F-12 Lincoln cent and how many letters in LIBERTY must be present to differentiate a G-06 from a VG-08 Liberty “V” nickel, but when it comes to the money grades–the Mint State grades–these books have little to offer.

By now you might be thinking “Okay, Ron, how DO you grade coins? I’ll say it again, it’s a hard question. But in this monthly column, I’m going to give it a shot.

First though, I’d like to flip it around: how do YOU grade coins?

Are you confident with your grading? How often do you have to refer to a guide book? How long does it take for you to evaluate a coin and render a verdict?

You’d be shocked at how fast we do it in the grading room. A professional grader can knock out a box of 20 coins in less than five minutes, and the best can do it in less time than that–especially if it’s a box of Saints, Morgans or American Silver Eagles.

When you grade, do you have a dedicated workstation with controlled light? What’s the wattage? Is ambient light from other sources present? You’d be amazed at how many bad bourse floor purchases are made due to the forgiving nature of bad ambient light.

When you are grading a coin–say, something in Mint State–do you have a number that you start at? Is every coin an MS-65 that gets downgraded based on the number of hits? Or upgraded by a point or so if it’s free of any marks?

Do you factor in color, strike, luster and planchet quality? If so, in what order? What’s your method?

What’s the relative strength of the obverse? The reverse? What if the coin’s reverse is stronger–much stronger–than the obverse?

Are you still confident with your abilities?

You can’t imagine the impact confidence has on grading. Most of the overgraded certified coins on the market are the result of bad graders living “up” to their ability or good graders having an off day. An undergraded coin? That’s because a grader lacked the confidence to make the right call.

For a collector, however, lacking confidence will limit your ability to cherrypick those undergraded coins. Or, if you literally have no idea what’s going on, it will get you eaten alive by dealers who know they can dump their junk on you.

Let’s do something about that. Let’s make you a better grader.

Let’s begin to answer the question.

Human beings have the innate ability to recognize patterns, forms, and symbols.

We instinctively do this, which explains why, when you see a car, a television, or a baseball team, you know what you are looking at, even though you may have not seen the specific objects before. 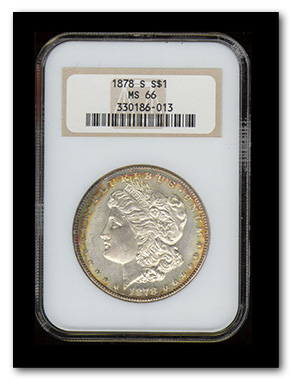 Of course, not all cars, tvs or baseball teams are assembled equally. Here, as in the coin market, quality costs.

So once you know what you’re looking at, observe it in the context of other similar things.

“Ron, that sounds too obvious. What does this have to do with coin grading?”

Daniel-san posed a similar question to Mr. Miyagi, when Miyagi handed him a sponge and told him to “wax on, wax off!”

You remember The Karate Kid, right?

In the movie, Daniel was an ambitious but undisciplined student of martial arts. Miyagi, his mentor and father figure, understood this and empathized with the fact that Daniel had no one in his life he could turn to in order to solve his problems–which, as the movie depicts, was mainly getting his butt kicked at every turn.

Tangential, I know, but many coin collectors (and even some dealers) are the numismatic version of Daniel-san: enthusiastic to a fault, yet undisciplined.

You see, Daniel didn’t understand that Karate isn’t simply the act of punching and kicking. It is a disciplined and synergistic exercise in body and mind control. Miyagi’s “wax on, wax off” wasn’t about washing awesome vintage cars, it was about repeating an act until it becomes automatic and the mind and body act as one.

The truly excellent coin graders don’t necessarily see themselves as martial artists–well, most of them anyway–but the disciplines are similar.

I’m walking the bourse and a dealer I know, a local guy, has some cherry new inventory. Among them is a fantastic 1878-S Morgan, ungraded.

He wants $1,500 for the coin. The 1878-S comes nice, but they aren’t the nicest S-Mints in the series. $1,500 is better than MS-66 money but a bargain if the coin goes 67. The purchase would be a disaster if the coin grades 65 or below. It’s Saturday, and the dealers have had two days to think it over. I just arrived. So the first question a collector – or a savvy dealer – might have is, “are the other guys wrong about this coin?”

If the coin were a no-brainer, nobody would have thought twice about paying $1500. Quality sells. Everybody in the industry knows this. And the smarter dealers make as much money at shows buying as they do selling (this is why half of the bourse is empty by lunchtime on Saturday at most big shows).

The difference between them and me is this. I’ve graded numerous 1878-S 67s currently in holders. I know what I need to see because I’ve seen hundreds and hundreds of them. Not just Morgan dollars, but nice 1878-S’s. I know how they come, how they’re struck, what the planchets are like. I can recall the details of the dozen 67s that I’ve graded and I know by looking at this one where it would fit in that spectrum.

Daniel-san learned the patterns, learned karate and beat his nemeses at Cobra Kai. It’s just an ancillary benefit that he can now recognize a 1948 Ford Super DeLuxe Club Convertible when sees one.