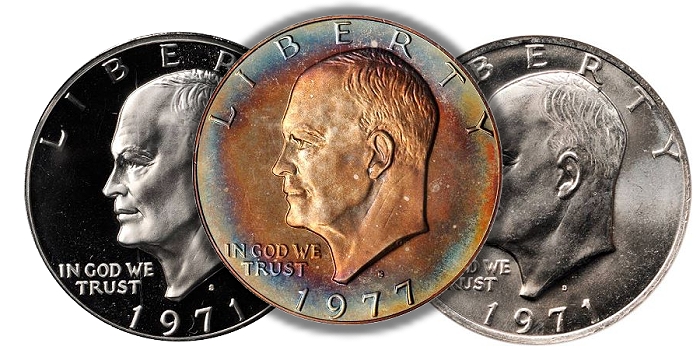 For better or worse, Whitman’s A Guidebook of United States Coins (the Red Book) is still the gold standard in printed price guides, even Eisenhower dollars.

That doesn’t mean, however, that its pricing scheme is the best or even the most accurate. But more than any other publication, beginner and intermediate coin collectors (and a great majority of coin dealers) rely on the Red Book to establish a retail price reference point. I have followed Red Book pricing quite closely in the course of researching the topic of registry set collecting, and one thing that I’ve noticed is that Whitman’s annual guide has done a good job over the years reflecting changes in the grading culture and the coin market.

When the Sheldon Scale was repurposed to serve as a pan-series grading format, Whitman reconfigured their publication to make use of the new system. And while Whitman’s Red Book painted with too broad a brush in the early years of this “new” system (a survey of classic commemoratives in the late 1970s and ‘80s, for instance, featured listings in AU and MS-65 with nothing in between), it did evolve to better serve a hobby that was in a state of flux and undergoing major turbulence.

I bring up Whitman’s A Guidebook to United States Coins because I cannot wrap my mind around why Whitman and its staff of contributors have been so tone-deaf in the past when it comes to Eisenhower dollars and other clad coinage from 1965 to the mid-’80s. Across the entire spectrum of circulating coinage minted in the clad era–with the exception of commemoratives, novelty quarters, and Presidential dollars–the coverage has been slim and market-limiting. It is as if the old guard, spoiled by living through the 1950s, the period of the greatest numismatic extraction in U.S. history, assumes that all uncirculated moderns are created equal and that there is little to no value in hunting and collecting better grade examples. Any reader can see this in strong relief when they compare the Red Book’s coverage of Kennedy half dollars with Whitman’s own specialty volume, A Guide Book of Franklin & Kennedy Half Dollars by Rick Tomaska. Comparing the price grids in these two volumes, you’ll swear that you’ve arrived on another planet.

It’s time for us to pull back the curtain on this practice and understand what is at stake for the coin hobby if we don’t. For the remainder of this article, I present a short case study on the Eisenhower dollar series. I’ll define its place in history and numismatic legacy, and how the Red Book is ignoring the obvious trading that occurs in this series in Gem state.

Putting the Ike in Context: A Brief History

The circulating Eisenhower dollar is a Cu-Ni clad coin. It is the largest clad coin ever attempted by the United States Mint, made in an effort to reaffirm its ability to produce quality, spendable, consumer-accepted coins. In the immediate aftermath of the debasement of circulating coinage, the Mint was charged with producing billions upon billions of clad coins to replace the intrinsically more valuable silver coins fast disappearing from the economy. During this transition period, Congress and the Mint made a critical error in their handling of the half dollar, which had seen regular use until 1964 when speculators began to hoard the new Kennedy half. While quarters and dimes were to be made from 1965 onward in a Cu-Ni clad composition, the Mint decided to reduce the silver content of the half dollar to 40%. This led to continued hoarding of the half to the point that, by 1970, the Mint produced only four coins that saw regular use in commerce: the cent, nickel, dime, and quarter. To understand the Eisenhower dollar, you must understand the culture and morale at the Mint. If it was to survive another 200 years, the Mint would have to remain relevant – and it could not do this by producing only four usable coins.

If the Eisenhower dollar failed, and failed spectacularly, then there would have been no telling what the future would hold for the Mint and its workers. This was the pressure that the U.S. Mint’s chief engraver, Frank Gasparro, was under when the first galvanos began to spin in the lathe. The Mint’s PR machine sprang into action. Books were written glorifying the coin and projecting a grand success even before the ill-suited Columbia coin presses went to work. What happened over the next seven years will be studied for the next hundred; the life of the Ike was every bit as turbulent and curious as the era of Morgan and Peace dollars before it. If the Eisenhower dollar were a silver coin, there’s no doubt that the numismatic industry would have invested the time and resources to truly exploit its many nuances, design varieties, and errors. If the market makers truly paid attention to the series, then they would know just how important the coin is and how necessary it is to preserve its legacy.

The mint produced more than 640 million Ikes during the coin’s short production run of 1971-1978. While many, if not most, circulated to some degree, modern circulated coins are not that collectible and probably never will be. The same can be said for large stockpiles in dealer’s inventories of low MS grade Ikes, the majority of which would grade out at MS-63 or MS-64 if submitted to PCGS or NGC. Unlike the Ike’s silver forebears, there is no real way (outside of spending the coin) that dealers can cull the ranks of the undesirable and uncollectible coins. So these coins sit and sell at whatever premium over face value a dealer can get for them. Coins of gem quality, however, are scarce. Many of the uncirculated sets have been poured over by specialists. For the 1973 mint set Ikes, which saw a mintage of only two million coins, it is possible that the top grade coins have already been found and holdered, and the window of opportunity for finding new MS-65 and MS-66 coins narrows on a daily basis. The same can be said for the 1976 Type 1 Bicentennial Ike, which is available only in 1975 mint sets. This coin has a mintage of just over four million coins, and the likelihood of pulling an MS-66 worthy coin out of a white government envelope is so remote that even top-tier registry set collectors settle for the best-looking MS-65s they can find. Collectors who use the Red Book as their point of reference would never know this.

Instead of focusing its attention where the action is in the Eisenhower dollar series by listing (at a minimum) the prices for Eisenhower dollars at the traditionally accepted MS-65 tier, they list prices at EX-40 and MS-63. This is perplexing. For starters, no other modern series, dating back to the late 1940s, is listed in the book with a top grade below MS-65. The Red Book editors list MS-65 pricing for Morgans and MS-66 pricing for Peace dollars. Furthermore, the Red Book does not tabulate pricing for circulated examples of Lincoln cents in the Memorial cent era (starting in 1959), Jefferson nickels after 1948, Roosevelt dimes after 1965, or Kennedy half dollars through the series’ entire run. When it comes to the Washington quarter, the Red Book lists the Heraldic Eagle Reverse Washington quarters in the clad era at MS-63 and MS-65, and then quizzically tracks the 50 State quarters at AU-50.

By listing the Ike at EX-40 and MS-63, they are tracking a market in lightly circulated EX-40 Ikes that does not exist and ignoring the major collectible grades: MS-65 and MS-66.

I bet before you started reading this article that you never considered the editorial nature of price guides. They are guides after all – and as guides, they are trying to relay to the reader a set of ground rules. They do not merely report values; they decide which values to report. In this sense, volumes like these are not objective tables of facts, but subjective editorials.

This is not to say that the system is by its nature corrupt, or that guides like the Red Book should not be trusted. On the contrary, without publically accepted guidebooks there is no market. For many series, thorough and accurate coverage in the Red Book helps serve the business interests of dealers and market makers, many of whom are Red Book contributors. Maybe it’s the case with modern series like the Eisenhower dollar that the editors of The Red Book have failed to reach out and collect the appropriate data. If this is the case, then I am happy to bring the matter to their attention. When entire coin series are under-researched and poorly represented, the hobby suffers. When you consider that this has been going on for almost the entirety of the clad era, the implications are more than troubling.

We Must Understand and Preserve Early Clads I stand in defense of Eisenhower dollars because of their endless complexity. It stands today as the greatest achievement in clad coinage in U.S. history.  It was the most technically challenging coin ever attempted (sorry, Saint Gaudens; your 1907 Double Eagle was spectacular, but try to churn out eighty million Eisenhower dollars on Army surplus presses) leading to a number of modifications and revisions, some of which are only now being identified by experts – and it is a series like this that calls into question how much experts really know about modern coinage. Researching the Eisenhower dollar is vital for numismatic historians who want to understand what the post-silver era was like. The Eisenhower dollar was a noble failure. In this respect, it truly is a perfect collectible coin.

I reject the false dichotomy that the coin hobby has adopted regarding classics and moderns. There are true rarities on both sides and more than enough room to study, collect, and understand both. Every classic coin was modern the day it was made, and for several issues, the mintages seemed enormous for the population and the type of economy the coins were minted into (For example, more 1857 Flying Eagle cents were minted than all of the large cents minted in the prior seven or eight years). Likewise, the time will come, and sooner than you think, when future generations look back at the dawn of the clad era and wonder why gem and gem+ coins from this period aren’t readily available. And when that day comes they will look at us, the supposed stewards of America’s numismatic heritage, and see how we failed them.

The 2013 Edition of A Guide Book of United States Coins arrives on April 3. I hope to see the venerable guide fix the structural problems that are now so glaring. Whitman is promising expanded coverage and the latest research in this edition. You know which sections I’m turning to first.

[1] Values taken from 2012 Edition of A Guidebook of United States Coins. MS-63 is the only uncirculated grade listed.

[2] Vales taken 3/16/2012 from NGC’s online price list. NGC and Numismedia share their price list. MS-65 is the standard MS grade used by Whitman for all modern series except Eisenhower dollars and Susan B. Anthony dollars.