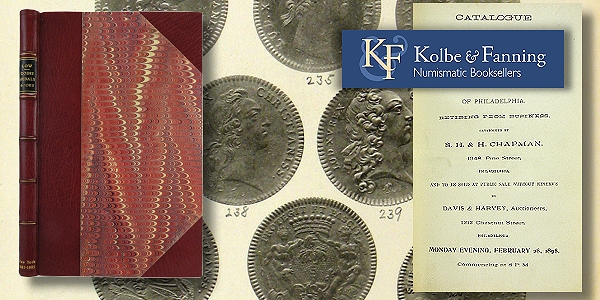 On Saturday, July 14, Kolbe & Fanning Numismatic Booksellers held their live online auction of highlights from the John W. Adams Library. The Adams Library was strongest in classic American auction catalogues, an area of the numismatic books market that has been somewhat weak in recent years due to the proliferation of online resources and other factors.

That market came roaring back on Saturday, as record prices were repeatedly realized for sales by the Chapman brothers, Tom Elder, Ed Frossard, Lyman Low, and others. John W. Adams Library of Numismatic Books and Catalogues included exceptionally rare plated catalogues from a number of different firms, as well as seemingly unremarkable, but extremely rare, unplated sales necessary to those striving to complete sets of given cataloguers. A few of the more extraordinary results follow:

Lot 58: a bound volume of eight Chapman brothers sales including the very rare H.M. Smith stamp sale, brought an amazing $21,600 on a $750 estimate. Lot 340: the extremely rare catalogue of United States Coin Company’s 1917 sale of the Dr. French collection, featuring a plate of Colombian gold coins, realized $18,000 against a $2500 estimate.
These astonishing results were joined by many others that, in a less spectacular sale, would deserve press releases of their own. The 368-lot sale (which took nearly six hours to complete!) realized over 160% of the pre-sale estimate, bringing over $550,000 with the premium.

Kolbe & Fanning extend our thanks to all who took part in this wonderful John W. Adams Library of Numismatic Books and Catalogues sale, and are happy to state that reports of the death of the numismatic book market in this country are greatly exaggerated.