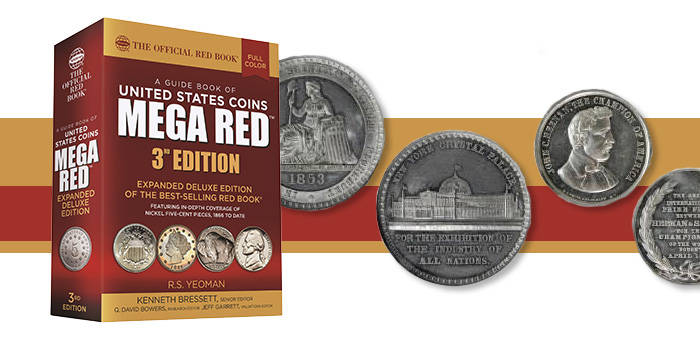 The third edition of MEGA RED (the Deluxe Edition of the Guide Book of United States Coins) includes a 10-page full-color appendix on So-Called Dollars, a class of nearly 800 different historical medals, many of them struck by the United States Mint.

The section’s author, Jeff Shevlin, is a specialist in the field. He defines So-Called Dollars as “U.S. medals approximately the size of a silver dollar that were struck to commemorate a historical subject.” He notes that many of the most famous engravers of U.S. coins also engraved So-Called Dollars, including William and Charles Barber, George T. Morgan, and Augustus Saint-Gaudens.

“Some of the designs and artwork on these pieces match or surpass these artists’ other work in coin and medal design,” Shevlin writes.

The medals are known as So-Called Dollars because their sizes typically range between 33 and 45 mm in diameter, similar to the silver dollar’s 38.1 mm. They were minted in many compositions and alloys, including gold, silver, copper, bronze, brass, aluminum, nickel, white metal, German silver, and gutta-percha. When composition is considered, there are more than 1,500 varieties to collect.

Shevlin writes that approximately half of So-Called Dollars were made to celebrate fairs and expositions (such as the World’s Columbian Exposition of 1893, held in Chicago), and the other half to commemorate a broad range of subjects. The completion of the Erie Canal in 1826 and the Transcontinental Railroad in 1869, the centennial of the Pony Express in 1961, famous Americans, military battles, and hundreds of other local, regional, and national subjects have been remembered with So-Called Dollars.

For collectors, Shevlin explores ways to assemble a specialized collection of So-Called Dollars.

He gives examples of military medals and other popular categories. “One of the most common So-Called Dollars is the 1931 McCormick Reaper Centennial Dollar, of which there were possibly as many as 5,000 struck,” Shevlin writes. “Compare that to the 1909-S V.D.B. Lincoln cent, of which 484,000 were minted. While the Lincoln cent in MS-63 would sell for $1,500, the McCormick Reaper in the same grade sells for around $20 despite being 100 times rarer.”

He also notes that many highly desired rare varieties from the 1800s are beautiful pieces of art, struck in bronze and with high relief.

“At the upper end of the So-Called Dollar market—those that sell for $1,000 or more—collectors are treated to exceptionally rare and significant pieces.”

Shevlin catalogs more than 80 individual varieties in a richly illustrated overview that includes history, photographs, and valuations in up to six grades from Very Fine to Mint State–65, plus Proofs. He starts with the 1853 Crystal Palace medal and concludes with the 1960 Boy Scouts of America 50th Anniversary Jamboree medal. (Continued below).

The third edition of the 1,504-page MEGA RED officially debuted at the Whitman Coin and Collectibles Baltimore Expo on March 30, 2017. The book retails for $49.95 USD and is available online (including at Whitman.com) and from booksellers and hobby shops nationwide. Because Whitman Publishing is the Official Supplier of the ANA, Association members receive a 10% discount off all purchases.